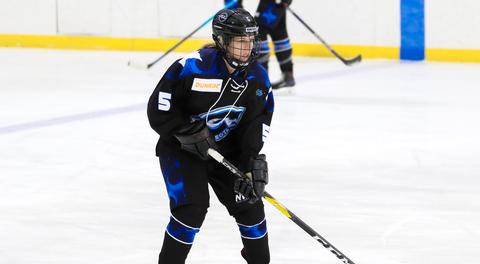 Winny Brodt Brown is a pioneering force in women’s hockey and continues to play the game superbly while leading the Whitecaps to excellence. The first-ever winner of the Minnesota Ms. Hockey Award, Brodt Brown was a star at the University of Minnesota and in the U.S. National Team program for a decade. In 2018-19, she conquered the professional ranks, winning the Isobel Cup in the Whitecaps’ first season in the NWHL. She has six assists in her first 34 games in the NWHL.

In 96 career games at Minnesota from 1998-2003, Brodt Brown had 134 career points with 41 goals and 93 assists. She was named the 2000 WCHA Defensive Player of the Year and a Patty Kazmaier Memorial Award finalist, and she led the Gophers to the 2000 AWCHA national championship.

Never one to dwell on her historic achievements, Brodt Brown was succinct when asked for a comment about signing to play another pro season. She emailed: “After a long break, I am really looking forward to getting back on the ice with my teammates and coaches!”

Anderson was 4-6-10 in 22 games in her first NWHL season with the Whitecaps after playing the previous two seasons in China in the CWHL. She began her collegiate career at the University of Minnesota before transferring to Bemidji State, where she served as an assistant captain for her final two seasons. Over four years in college, she recorded 68 points (31-37-68) in 142 games, including leading the Beavers in goals for two seasons. She was also part of the U.S. Women’s National Team that won a gold medal at the IIHF Women’s World Championship in 2015.

“I really enjoyed my first NWHL season and I’m incredibly proud to be a member of the Minnesota Whitecaps again!” said Anderson. “I’m looking forward to putting in all the hard work as a team so we can make another run for the Isobel Cup championship.

Martinson has become a mainstay in Minnesota, playing in the State of Hockey for high school, college, and the pros. Last season, her second in the NWHL, Martinson had a goal and seven assists in 18 regular-season games. Martinson joined the Whitecaps after a successful collegiate career at St. Cloud State.

“I am so excited to be back for another NWHL season with the Whitecaps,” said Martinson. “It is an honor to have the opportunity to continue playing the game I love in my home state with great teammates, coaches, staff, and fans. Roll Caps!”

Said Minnesota GM and co-head coach Jack Brodt: “We are pleased to have Winny back as our captain for the Whitecaps’ third season in the NWHL. With her great poise and vision, she is one of our key defenders. Steph is an excellent all-zone player and a very, very aggressive forechecker whose speed puts a lot of pressure on opposing defenders. Lisa was outstanding for us last season and continues to develop as a very reliable defender. Winny, Steph, and Lisa will all be key factors in our team’s success.”