The much-anticipated showdown between the two Isobel Cup Final contenders more than lived up to the hype.

Featuring end-to-end rushes, remarkable saves from both netminders, and some pretty goals, this was a fun game to watch from beginning to end, though probably more fun for Minnesota, who skated away with the 2-1 victory.

It was Boston that go on the board first at 13:19 of the opening period; Jenna Rheault carried the puck behind the net before sending it back out into the slot, where it deflected right onto the stick of a waiting Christina Putigna.

The Whitecaps didn’t wait long to respond; less than three minutes later, Audra Richards stormed up the right side and fed a waiting Jonna Curtis, who tapped home Minnesota’s first goal of the game.

The Whitecaps got the go-ahead goal in the second period after an intense sequence that almost saw Boston get another tally of their own. After Leveille made a huge stop at one end, the Whitecaps stormed down to the other, where Richards assisted captain Winny Brodt-Brown on the first NWHL goal of her career. The Whitecaps clung on and killed off a late Boston power play to preserve the win. 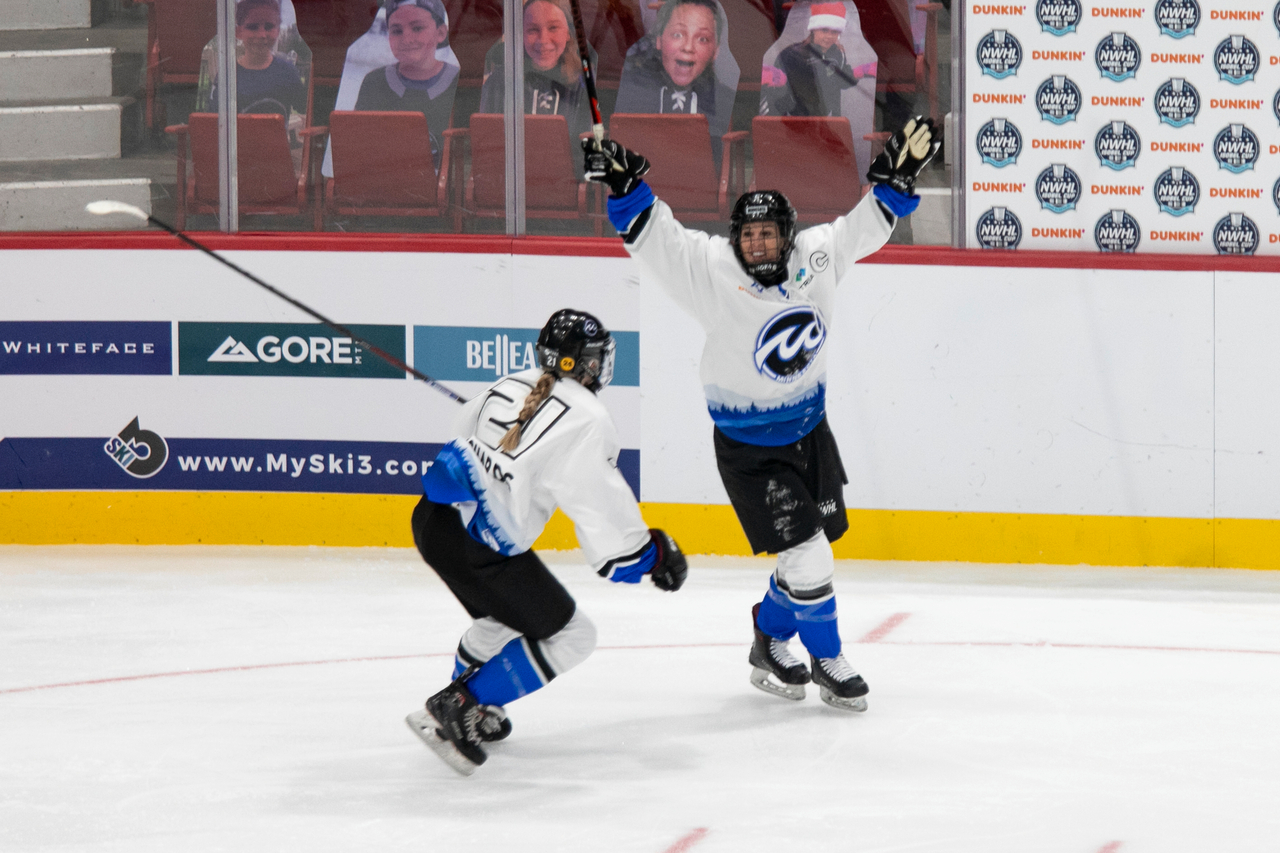 Here are some highs and lows from the contest:

Lovisa Selander and Amanda Leveille are two of the very best in the game, and they were both on their A-game today. Selander made 17 saves on 19 shots, many of them to keep the Pride in the game.

“She made some big saves for us, but that’s what Lovisa does. She’s an all-star goalie and we expect her to make big saves,” said head coach Paul Mara. https://clips.twitch.tv/LightDoubtfulWombatBrainSlug

He was just as complimentary when it came to their Leveille, who finished the game with 37 saves. “Minnesota’s a fantastic team, Leveille’s an awesome goalie and she stood tall for them,” said Mara. “I’ll (say it) bluntly if Leveille’s not in net, I think it’s a 5-2, 6-2 game for us.”

Give credit where it’s due – Boston’s power play wasn’t on point today, but that was in large part due to the aggressiveness of Minnesota’s penalty kill. It wasn’t unusual for Boston to have the puck on their stick and then Minnesota skating up on a fast break just a few seconds later.

“I think it was the best game for our penalty kill over the last three years,” said Minnesota head coach Jack Brodt. “I can’t remember another game where we killed penalties better.”

Boston is a hard team to knock off their game, but Minnesota didn’t give the Pride any spare time or space tonight. Minnesota’s PK keeping Boston on its heels was a big part of the Whitecap’s success. 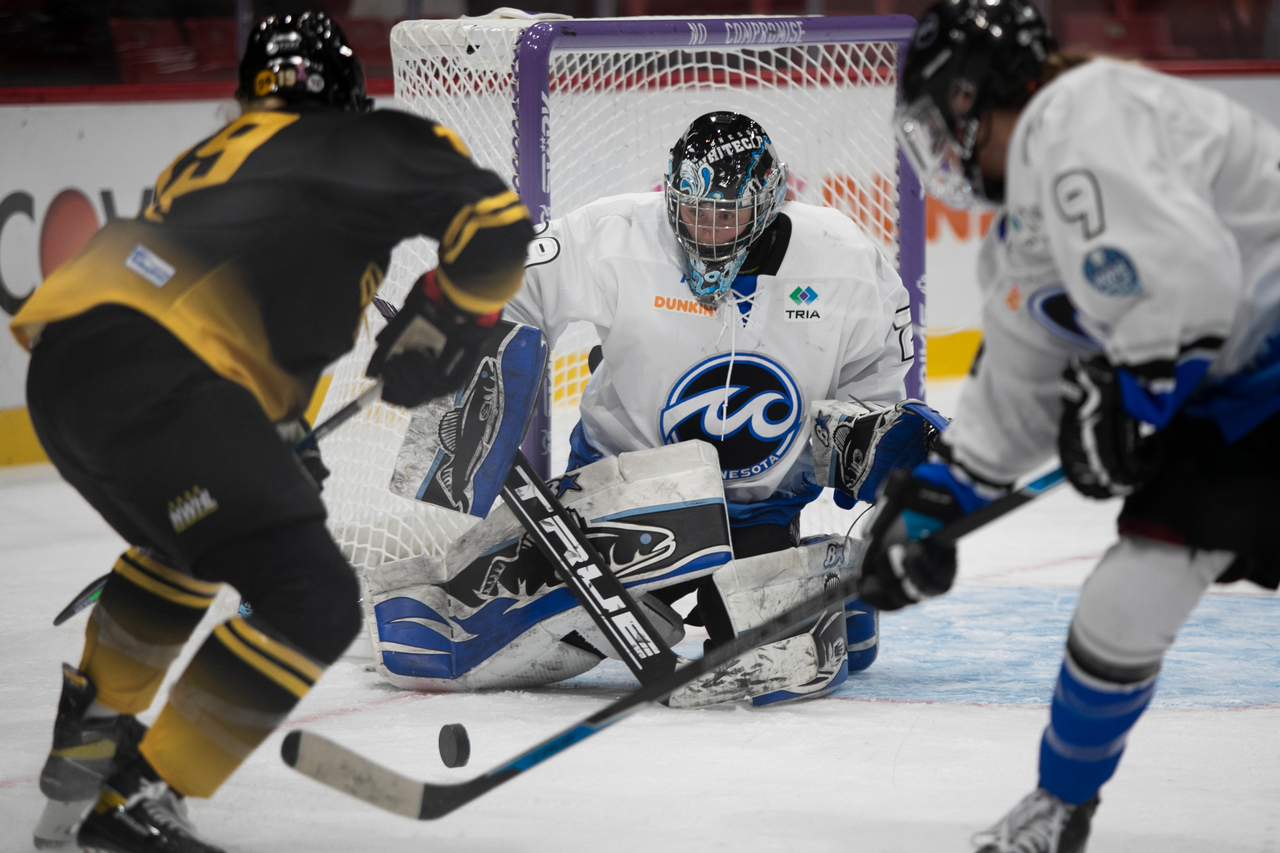 Though they struggled on both the power play and scoring, the Pride were solid at the face-off dot today. The Pride won .647 percent of their face-offs, while the Whitecaps finished the game with just a .353 success rate. The majority of those wins came courtesy of Jillian Dempsey, who went 14-4, and Tereza Vanisova, who won eight of her 15 face-offs.

When asked in the postgame press conference about what wasn’t working on the power play, head coach Paul Mara simply replied, “Everything. Our power play hasn’t been clicking for two years.” Short, sweet, and to the point.

The Pride needed just one goal on six power-play opportunities and came up empty on all of them. The team will look at some video tonight and hope that they can solve their special team woes tomorrow against Buffalo. Whatever kind of a goal it is, the Pride need to get this monkey off their back quickly – there’s not much time to waste in the shortened season.

Broadcaster Erica Ayala noted more than once during the game that she was expecting more from both teams. Though both teams came out with noticeable speed, it took some time to adjust back to game speed.

“It was definitely a fast pace, it always is against Minnesota. Just trying to get the legs back, obviously, we’ve been doing everything we can (with) conditioning,” said Jillian Dempsey. “There really is nothing like being in an actual game like that, so it did take a little bit I think for everybody to get those first couple shifts in and get the legs going.”

Both the Pride and the Whitecaps had moments where everything was clicking. It’s going to take some time for both teams to get their legs under them, but it will be interesting to see where both teams go from here.

They certainly improved as the game went on – Selander had to make a couple of crucial saves late in the third – but we were just as likely to see an odd-skater rush from Boston when the Whitecaps were on the power play.

The shortened bubble season is a necessity, but these are two teams that are so much fun to watch, and it’s a pity we won’t see them playing against each other again (unless they meet in the postseason…we’ll have to wait and see).

This was an emotional win for the Whitecaps and is surely going to bolster their spirits, both because of the win and because they beat their Isobel Cup opponent from last season.

That said, the Pride are disappointed, but they don’t doubt for a second that they’re still a highly skilled team. Head coach Mara said it best: “A little adversity never hurt anybody. If we keep playing the way we’re playing, we’ll be just fine.”