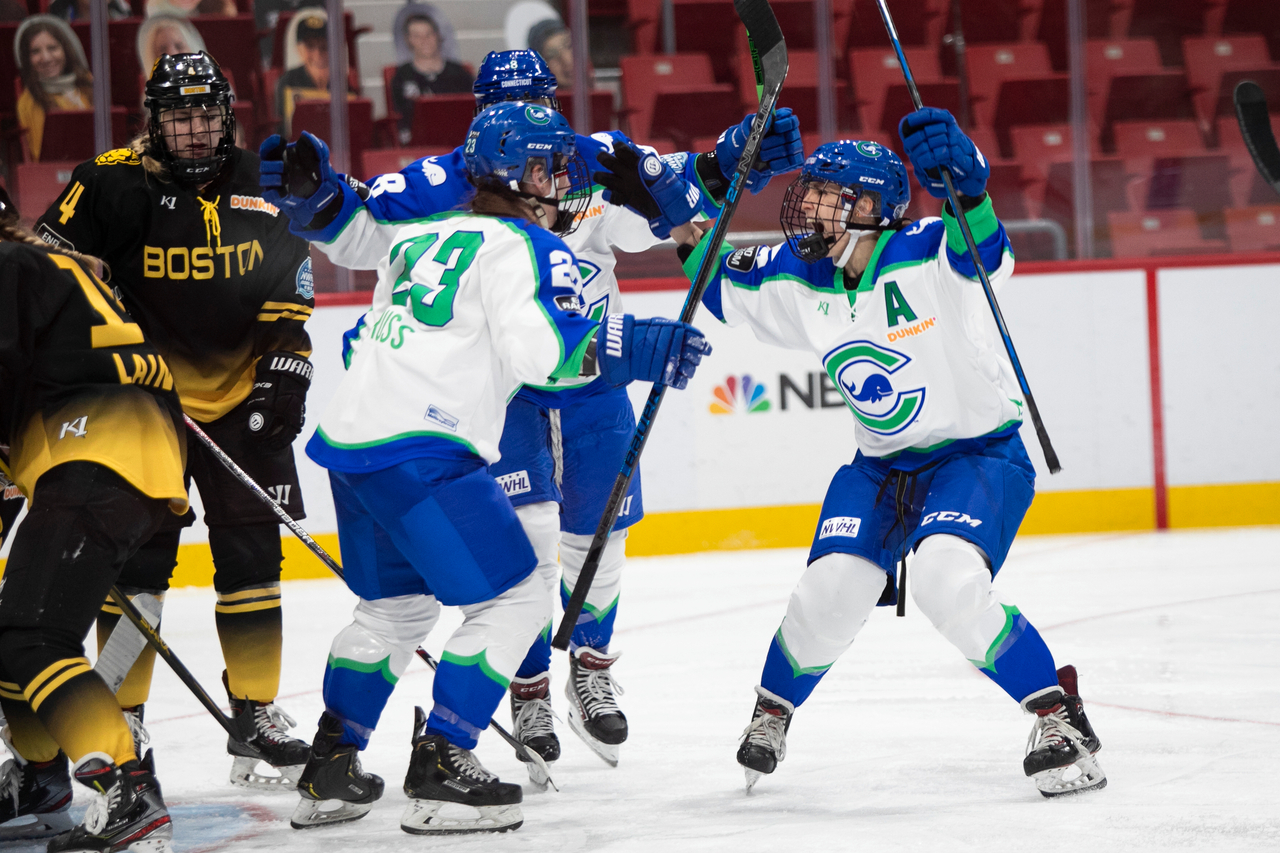 The Connecticut Whale knew going into the NDubble that they had made improvements up and down the lineup, but only time would tell if it would be enough to keep up with their opponents.

The verdict is in: Connecticut is here to compete. The Whale stunned the Pride with a 4-1 win on Wednesday night, scoring four unanswered goals in the third period to earn their first win against Boston since February 2018.

“Really a character win for our team the way they battled, the way they stuck with it just proved how much this group has improved,” said head coach Colton Orr.

Boston struck first late in the opening frame; with Katelynn Russ in the box for holding, McKenna Brand darted into the slot and redirected a shot from Christina Putigna past goalie Abbie Ives.

The score stayed knotted at 1-0 for all of the second period, with the Pride outshooting the Whale 10-2 in the middle frame. Boston just couldn’t get the bounce they needed to increase their lead.

The Whale broke the game wide open in the final period. Tori Howran tied the game with a blast from the point with traffic in front of the net, and just two minutes later later Katelynn Russ scored the game-winner. Less than three minutes later, former Pride forward Alyssa Wohlfeiler went glove-side on Hanson.

Emma Vlasic added to the lead on the power play, putting the cherry on top of a remarkable game for the assistant captain. Vlasic factored into all four of the Whale’s goals, earning assists (finally!) on the first three goals before netting one herself.

It was an incredible performance by the Whale and head coach Colton Orr, and didn’t go unnoticed by Pride head coach Paul Mara.

“(Orr)’s done a fantastic job with that team, from the way they started last year to now, it’s a totally different team,” said Mara. “He’s a fantastic coach, and you (have to) tip your hat to him. He’s done unbelievable.”

The Whale’s season ended last year in a heartbreaker against the Pride in the Isobel Cup playoffs, and earlier in the season the Whale took the Pride all the way to a shootout before falling to them 2-1 there. But this year Connecticut managed to put all the pieces together to secure a win against Boston.

“It felt really good. I think this team last year would always beat up on us, and it was always a battle…we couldn’t quite get over that next step to beating them,” said Vlasic. “It’s such a big win and it feels really good to finally get over that hump and be able to beat this team.”

The Whale, who had two days to rest up after the weekend’s double headers, knew that they would have to keep their play consistent during all 60 minutes.

“Coach stressed sticking to the game plan all through the three periods, we knew that we would wear them down by pressing in all three zones, and I think that definitely helped, us having a rest day and not playing yesterday,” said Howran. “Just sticking to the game plan, forechecking hard, and keeping our neutral zone passes and transitions quick really helped.”

All things considered, the Pride had a decent night on the ice. Through two periods, they had a 1-0 lead over Connecticut and outshot the Whale 10-2 in the second period. But fatigue finally caught up with them – Wednesday’s contest was their fourth game in five days.

“Four games, five nights, late game last night, (we didn’t) get to bed until 1 o’clock in the morning, and to turn around and have a late afternoon game is really tough,” said Mara. “No excuses. I thought we played an extremely strong game in that third period, and the wheels fell off.”

It didn’t help that the Pride’s captain, Jillian Dempsey, didn’t play after an injury in Tuesday’s game sidelined her. Dempsey dressed and took warmups, but stayed on the bench for all 60 minutes. That said, her presence was still a big boost for the team.

“She’s a huge presence off the ice as well, so every single time someone got off the ice, she was cheering them on,” said forward Lexie Laing. “She’s just a big voice and a big presence on the ice, just having her there felt better.”

Mara said that they’re taking Dempsey’s injury day-by-day, and that she would be evaluated again by a doctor tomorrow. The Pride finally have a break in their schedule, and a couple of off days should help the team heading into the weekend.

previous
Boston and Connecticut both looking for a win
next
Buffalo's Jackson shines, Toronto keeps rolling