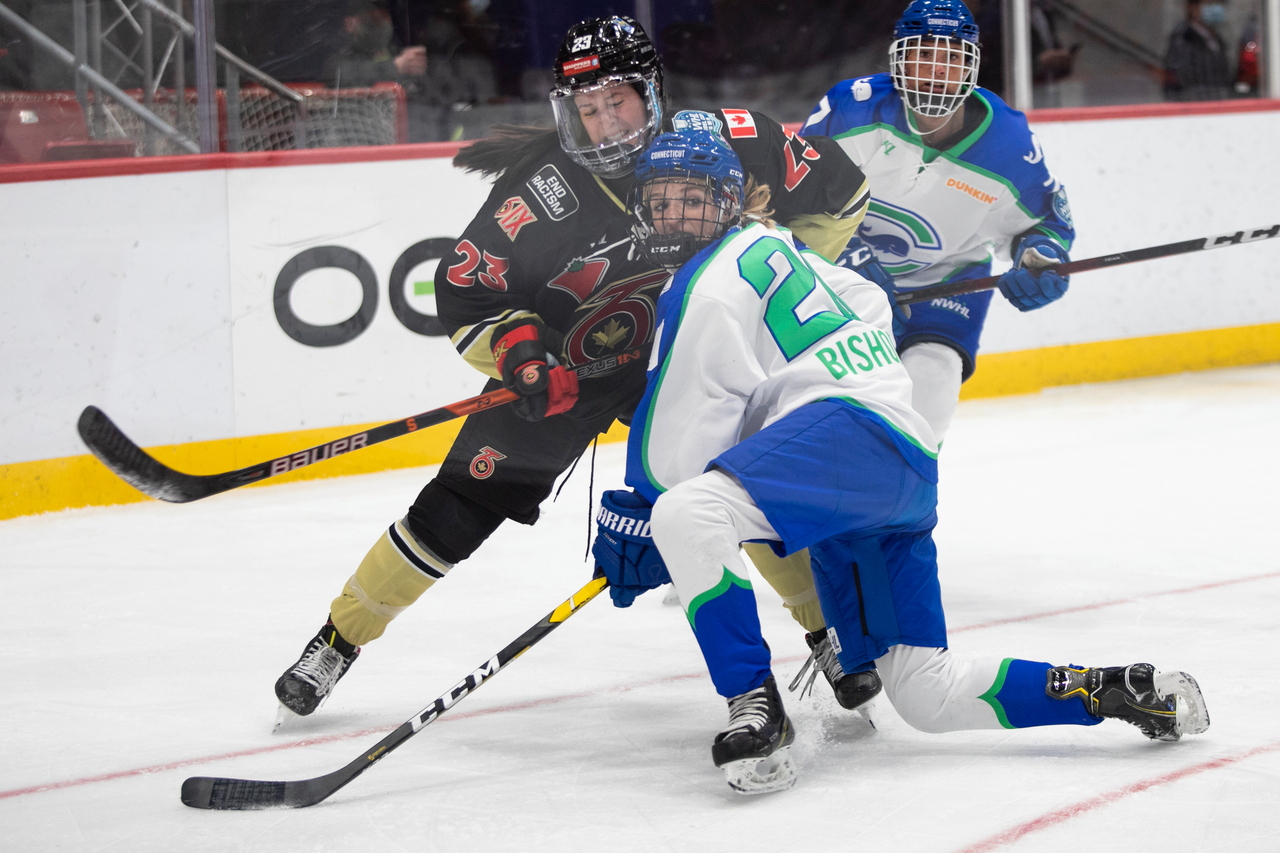 In a game that felt closer than the final score indicated, the Toronto Six clinched the No. 1 spot heading into the Isobel Cup playoffs in a 6-0 win over Connecticut.

The Whale will face off tomorrow against the Minnesota Whitecaps to determine which team will get the No. 2 spot, and for them, it will be business as usual.

Both teams were scoreless after the first period, but the Six got on the board twice in the second. Sarah-Eve Coutu-Godbout skated into the shot and shoveled a puck towards the net that was redirected past netminder Abbie Ives. Taylor Woods doubled the lead on a seeing-eye shot from the point on the power play. The Six held on to the 2-0 lead after the first 40 minutes.

The scoring kept coming for Toronto early in the third; Mackenzie MacNeil scored the Six’s third and fourth goals just under two and a half minutes apart.

But they didn’t stop there; living up to their name, the Six’s Taytum Clairmont scored at 10:53 in the third and Mikyla Grant-Mentis finished off a gorgeous feed from Clairmont just 23 seconds later to make it 6-0.

“We’re just a team that refuses to give in to any problems. We’re solving them, they’re a group of kids that just continue to learn and grow and depend on each other,” said head coach Digit Murphy. “They continue to surprise me in how they can just execute.”

The Whale don’t have much time to regroup before facing the Whitecaps tomorrow, but they already know the adjustments they need to make against Minnesota.

“Puck possession was a big thing. We were kind of throwing pucks a bit, we weren’t breaking out really clean, we weren’t entering the zone really clean,” said Orlando. “We just want to focus more on pucks going tape-to-tape passes, and really possessing the puck and creating offense that way.”

A piece of good news was initial reports on Janine Weber, one of the team’s assistant captains, who went down with what looked like a knee injury late in the game. Though she didn’t return to the ice after getting helped to the dressing room, it seems possible that she could be back for the team tomorrow.

Thanks to their incredible depth and the clutch goaltending of Elaine Chuli, the Six extended their winning streak to four games and are looking like a formidable postseason opponent.

“No matter what line you put out there, they’ll get to the puck to the net, they’ll get shots on net,” said MacNeil. “Everybody’s been working so well together, and collectively we’ve been putting lots of shots up on the board, but also putting pucks in the net today felt pretty good as well.”

Toronto can take it easy for a couple days; they have Tuesday off and won’t play again until the Isobel Cup semifinals on Thursday. The Six don’t yet know who their first playoff foe will be – as the No. 1 seed, they’ll play whoever wins tomorrow’s Game 3 between Boston and Buffalo. Depending on which team that is, they’ll alter their game plan to fit their adversary’s style of play.

“They’re both really good teams – they’re good, but they’re different,” said Murphy. “I look at Boston as starting to hit their stride, I think they’re going to be very formidable, but Buffalo has great goaltending, they have some great players, they’re hard to play, they’re big and physical.”