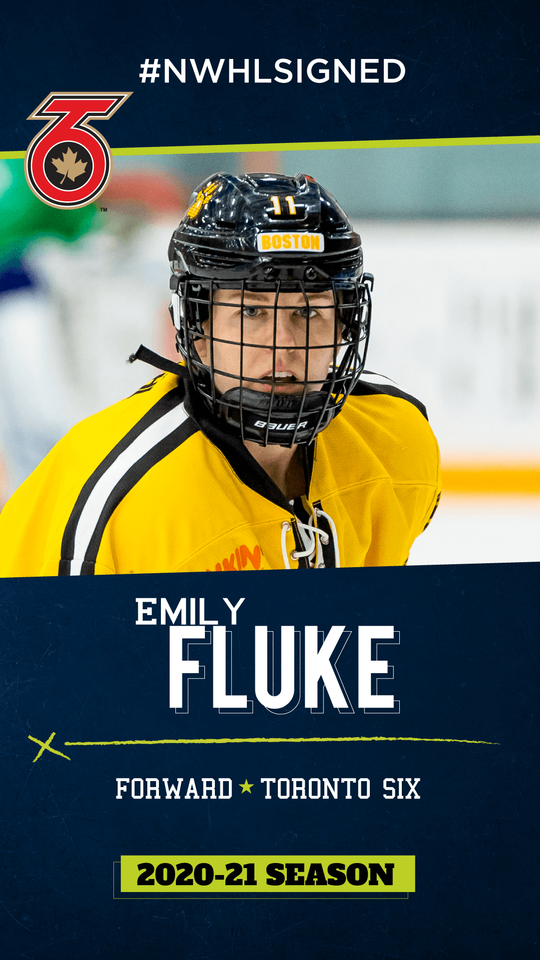 “Emily is a seasoned veteran in this league, and she will play any role asked of her,” Head Coach and President Digit Murphy said. “She is a winner both in life and in hockey and that is exactly what we want in a player. We are excited to have her as part of our organization and can’t wait to have her on the ice to help with our quest for an Isobel Cup.”

In 2017-18, Fluke joined the Connecticut Whale and posted 11 points in her first NWHL season. The next year, Fluke was named captain of the Whale, scored 11 points, and added a goal in the playoffs. As a winner of the fan vote, Fluke was selected to her second NWHL All-Star team and represented Team Stecklein at the NWHL All-Star Game in Nashville in 2019.

Fluke then joined the Pride and was instrumental in Boston’s 2019-20 NWHL regular-season championship. Fluke was fourth on the team with 27 points — the highest total of her NWHL career — and scored two points in a victory over Connecticut in the Isobel Cup Semifinals before the Final was canceled due to COVID-19.

Prior to the NWHL, Fluke played four years at Middlebury College, where she registered 54 goals and 61 assists for 115 points in 109 career NCAA games for the Panthers.

“Digit really got me fired up about the incredibly talented team and amazing leadership group with the Six and I couldn’t turn down the opportunity,” Fluke said. “I am beyond excited to join the team and to be able to continue my professional career in the NWHL.”

The Toronto Six is a professional ice hockey expansion team that will be based in Toronto and will begin play in the upcoming National Women’s Hockey League (NWHL) season. The Six are the NWHL’s first professional hockey team to play in Canada. An ownership group is led by Johanna Neilson Boynton. Digit Murphy is the team’s President and Head Coach, and Mandy Cronin serves as General Manager.