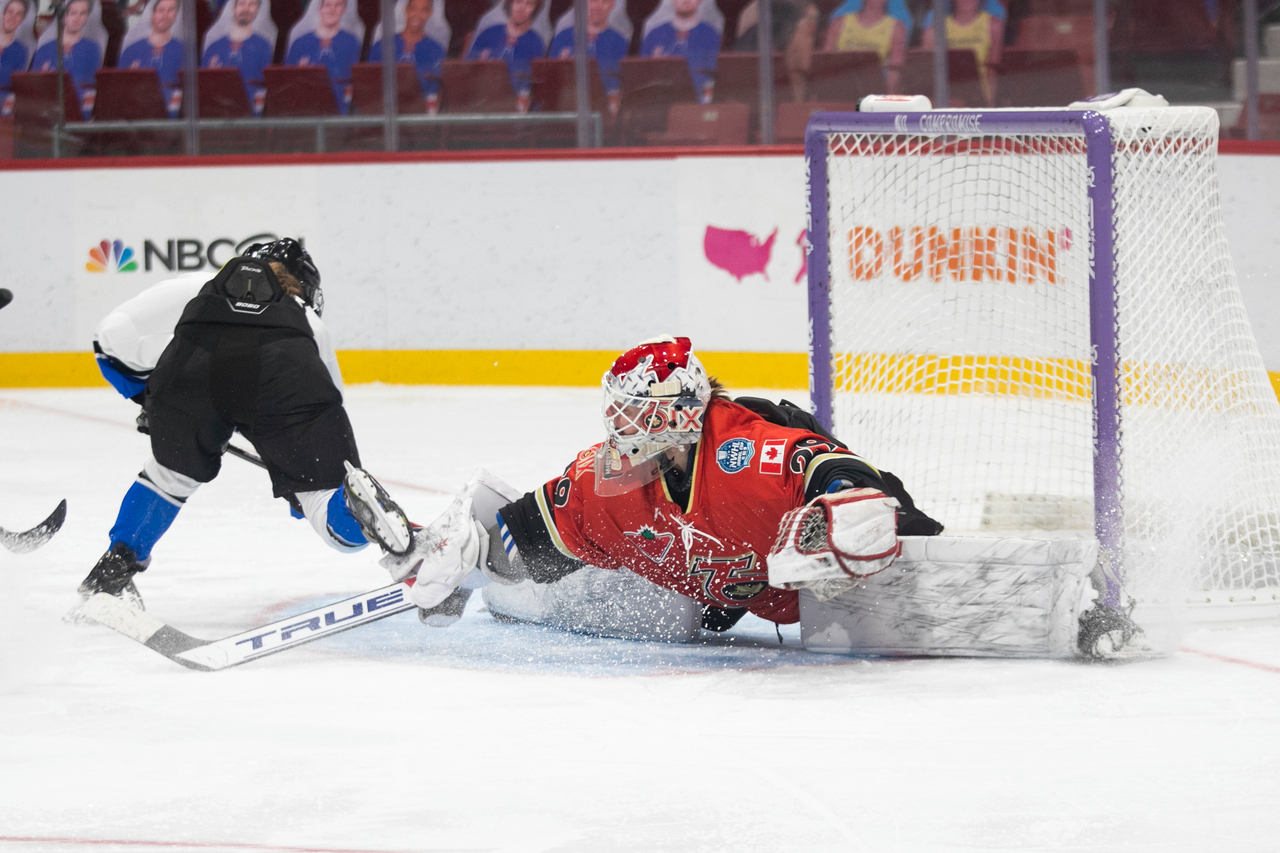 After Minnesota stormed back from a 5-1 deficit against Toronto in their first matchup, we knew the second game wouldn’t disappoint.

The Six and Whitecaps traded goals all game until Mikyla Grant-Mentis put Toronto on her back, scoring with just 23 seconds left to hand the Whitecaps their first loss of the season, 4-3 — though it wasn’t an easy win by any means.

Grant-Mentis went top shelf on a feed from Lindsay Eastwood on the Toronto power play to open the scoring in the first period.

The Six led 1-0 going into the first intermission, but Minnesota answered back on a power play of its own early in the second. Nina Rodgers picked up her first goal in the bubble off of a gorgeous cross-ice pass from Haley Mack.

Toronto took the lead again on a turnover from Minnesota. The Whitecaps couldn’t keep track of the buzzing Toronto offense, and Taylor Woods scored from the slot to make it 2-1.

Brooke White-Lancette tied it back up for Minnesota late in the second frame, tipping home a pass from Audra Richards past goalie Elaine Chuli with 29 seconds remaining in the period.

Sarah-Eve Coutu Godbout got her first goal in the bubble to make it 3-2 Toronto, tucking a puck that just slipped past Leveille into the net.

Matching them stride-for-stride, Rodgers got her second of the game on the power play with traffic in front of the net to even things up again.

It was Grant-Mentis who ended the stalemate with just 23 seconds left in the game, skating in on the right side and shooting at a sharp angle past Leveille.

The Six having fun on the playground

It was the offense again that shone for the Six, particularly Grant-Mentis, who looked unstoppable tonight. Toronto outshot their opponent 45-31, despite being without Brooke Boquist, Emma Woods, and Kristin Barbara, who are all day-to-day. While the Six are focused on limiting their opponents chances, that’s mainly so they can generate more of their own.

“Then it’s about being in the playground, cause that’s really where we have the most fun,” said Murphy. “When we have the puck, we love having it, we love shooting it.

Assistant coach Lisa Haley pointed out that it isn’t just the forwards getting on the scoresheet who have been driving Toronto’s offense; defender Eastwood, who picked up an assist tonight and is currently on a four-game point streak, has been an anchor on the blue line.

“Honestly, I don’t even know where to start with Easty…her hands are unbelievable, her vision is unbelievable, her reach is unbelievable,” said Haley. “I think her biggest weapon is her poise. She doesn’t get rattled, and she’s able to make those plays under pressure, and thank god. I think she’s been driving our offense really well from the back end.”

While the Whitecaps didn’t get the win they wanted, there were plenty of positives to take away from the game.

One of those bright spots was of course Rodgers, who picked up not one but two goals for Minnesota. Rodgers currently has six points for the Whitecaps and has been thriving for them this season.

“I’m going to go wherever the coach tells me to go, and thankfully this year I’ve been called upon a little bit more than previous years, so I’m just trying to have fun with it,” said Rodgers.

In a year where well-known names like Jonna Curtis and Allie Thunstrom have mostly been kept off the scoresheet, Rodgers has been instrumental in keeping Minnesota in the win column.

“She takes advantages of the opportunities she gets, as you saw tonight,” said assistant coach Laura Slominski. She’s a great teammate…no matter what role she’s been in, she’s always been positive and encouraging.”

Also trending upwards for the Whitecaps has been the team’s power play, which scored twice tonight on six chances.

“Special teams this whole tournament have been pretty critical, so it’s something we just have to keep getting better at. It was fun to see tonight our power play clicking, ” said Slominski. “They’ve been making really nice plays, but as Nina said, to bury a couple was nice to see.”