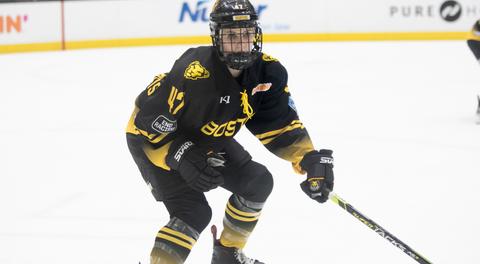 In March the Boston Pride raised the Isobel Cup becoming the first team to win the NWHL’s prestigious honor a second time.

As the trophy was passed around in celebration at Warrior Ice Arena it was embraced by three players chosen by the club in the 2017 NWHL Draft that illustrates a winning roster development by way of the annual selection process unlike any other in the league’s short history.

It may have taken four years for the Pride to reap the rewards in terms of a title, but the club’s 2017 picks in Mallory Souliotis, Lexie Laing, and Lauren Kelly showcase just how championship depth can be acquired through the draft.

“It was a long time coming,” said Souliotis. “Our group has been together for a few years and we’ve always been working towards the final. We were robbed of playing the last game in 2020 and were itching to get back to that opportunity. I haven’t thrown my stick in the air since before college. I’m really speechless when I think about it.”

The professional journey began for Souliotis as the eighth overall pick in 2017 which was actually Boston’s third choice that season following goaltender Katie Burt at number one and forward Kenzie Kent at four. She was enrolled in the Biomedical Engineering program at Yale University when the Pride came calling and boosted her confidence going into her senior year.

“I didn’t always know I would play hockey,” she said. “I wanted to be picked but also wanted to have realistic expectations. When I found out I was totally caught off guard. It was satisfying that somebody thought I was a good player and wanted me. All of my hard work and all the sacrifices to get there had paid off. It’s a pretty cool experience being chosen by your hometown team and there’s no other team I’d rather play for.”

Souliotis has now played three full seasons with the Pride and is among the league’s top defenders. She’s enjoyed sharing experiences with the teammates that followed her in the draft including Laing who was picked at number 12 and Kelly four picks later at 16. You can add McKenna Brand to that mix, too, since the 11th overall pick of the New York Riveters that season ultimately signed with Boston.

“McKenna passed me the cup and I handed it off to Lauren,” Souliotis recalls. “It just brought so much joy. I soaked in every moment because moments like that don’t come around often. It’s definitely special that we made the jump to the NWHL together. To have four people end up in the same place speaks volumes about us as players but also the organization with a mindset to build and win championships.”

Head coach Paul Mara joined the Pride a year after the 2017 selections were made but has always emphasized a winning attitude and recognizes the contributions made by that special draft class.

“The goal is to draft players who will affect the team for years to come and that group is a perfect example of that,” Mara said. “Mallory, Lexie, Lauren, and McKenna have been key components of our team over the last three years and had great impacts on the success we had this year.”

The group is part of a deep class of 1996-born New England talents whose skills and chemistry pre-date the Pride. Souliotis played alongside Laing and Kelly in high school with the Assabet Valley program before embarking on her collegiate career at Yale. Laing went to Harvard and Kelly to Northeastern where she would play with Brand.

“It’s really cool looking back to be chosen with some of my friends,” Souliotis said, while also providing scouting reports for the teammates she’s grown up playing with. “Lexie is the most underrated player in the NWHL. I don’t think people realize how smart she is. She always wins face-offs, is great in the corners, and good things happen when she has the puck. Lauren is one of the toughest defenders to play against in a shutdown role and has a rocket of a shot. She’s always having fun and just a great presence. McKenna is so quick and can stop on a dime. She is elusive with a quick release, and very gritty and hard-working.”

Souliotis describes herself as a strong defender who likes to jumpstart the offense and make plays. This season she skated alongside NWHL Defender of the Year, Kaleigh Fratkin, on the team’s top blue line pair playing major minutes in some of the Pride’s biggest situations.

“On the ice, she played in all three zones fantastically scoring some big goals with her big shot,” coach Mara said. “Off the ice, she has tremendous character. She’s the kind of person we want in our locker room and has in our community. She’s been very dedicated to making an important difference in Boston which is a testament to the kind of person she is and the character she has.”

And while her three goals in seven games this season are proof of her involvement in the offensive zone, the character and off-ice contributions evident in the 25-year-old described by coach Mara were honored with a 2021 NWHL Foundation Award.

“It means a lot to be recognized and appreciated for a community award,” she said. “It’s near and dear to my heart because I pride myself on my community service and realize how important it is to give back to others who don’t have the same opportunities that I’m lucky and privileged to have.”

Her efforts have largely been in support of the Epilepsy Foundation of New England and include several donations and GoFundMe campaigns, selling custom hats, and contributing funds from her jersey and shirsey sales to the tune of nearly $2,000 to date. In addition to her Foundation Award, Souliotis was also voted as one of the Fans’ 3 Stars of the season.

“I think people voted for me mostly because they love my cats, Tito and Gordie, on social media,” she laughed. “But it’s awesome to have support and connect with fans worldwide who share a passion for hockey. For example how accessible the league is now on Twitch and what it’s done for women’s hockey and getting more eyes on the sport is unique for our fans and really exciting.”

Souliotis marvels at how far the league has come over the course of her career which includes the recent doubling of the salary cap up to $300,000 per team.

“I was over the moon,” she said of the pay increase. “People don’t realize how young the league is and how ownership has helped us get resources we need to compete. Plus getting more sponsors on board for the revenue split. Everyone is dedicated to the players and getting more money in all of our pockets.”

She’s also one of the league’s stars for balancing life in professional hockey along with the demands of a career working as a Bioanalytical Research Associate. It’s a path she’s grateful for and although it can be busy it’s not something that should dissuade any prospective players.

“If you want to play hockey, then play hockey, and your career will fall into place,” she said. “There’s so much out there with people who are ready to help and give you an opportunity to do both to the best of your ability.”