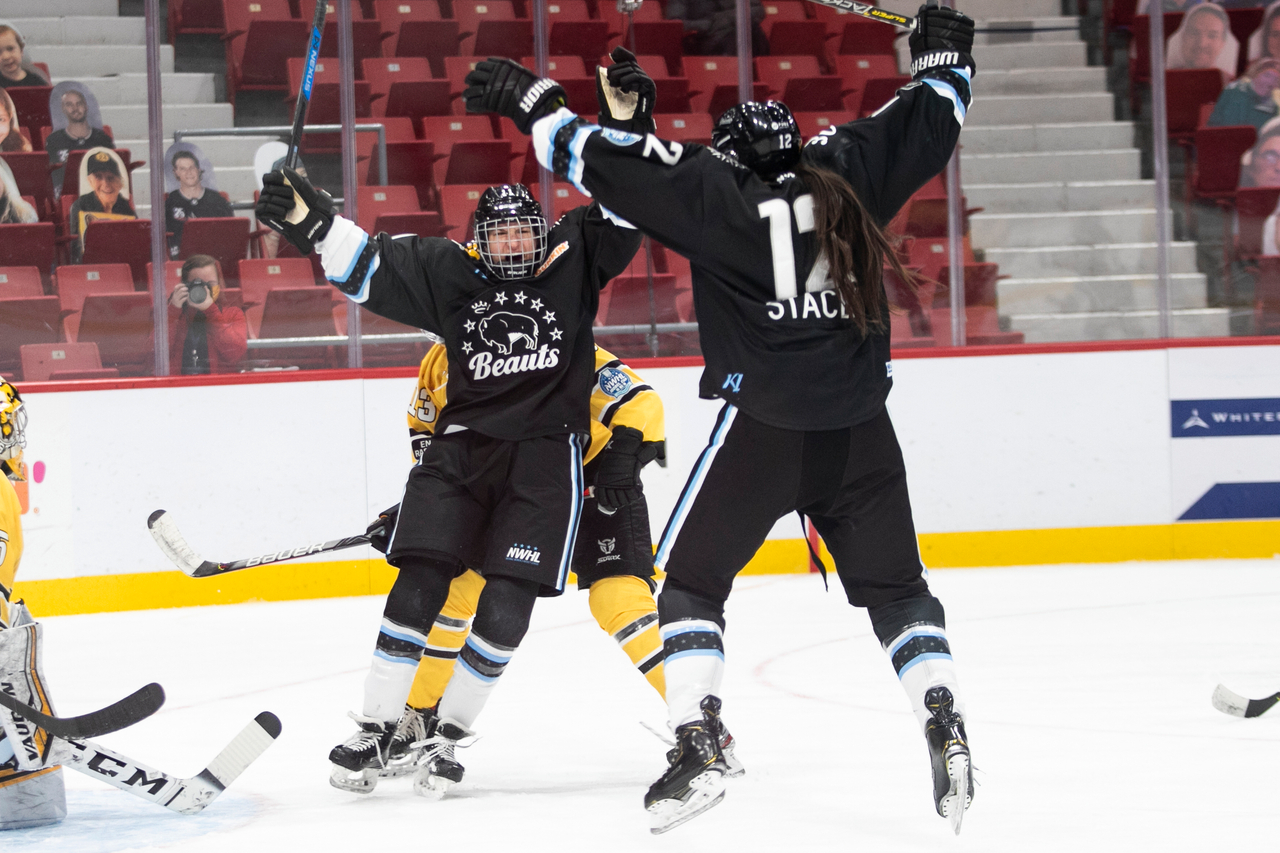 You couldn’t have scripted a better ending — or, for Lisa Chesson, a better beginning to her season in Lake Placid.

In a tightly played match, it was the veteran defender who scored the go-ahead goal for Buffalo in her first game in the NDubble. The Beauts won 2-1, and need just one more win to advance to the Isobel Cup semifinals.

Boston got off to a strong start, looking every bit like the team that won 23 games last season. That momentum carried over on the team’s first power play of the day, when Lauren Kelly picked up a beautiful goal on a big rebound from Buffalo goalie Carly Jackson.

The Pride held onto that lead for the first period, but the Beauts struck back in the second frame. Jordan Juron carried the puck into the zone and threw it to the front of the net, where a waiting Autumn MacDougall picked up her third goal of the season to tie it after 40 minutes.

“We saw ourselves 1-1, and to a player we knew we were going to win the hockey game,” said Perram about the mindset in the second intermission. “So they just went out and did it. This is on the players, not on me.”

With Boston on the PK late in the third period, Juron drove to the net and sent a puck through the slot that landed right on Chesson’s tape. She roofed it past Lovisa Selander for the game winner.

With their win today, the Beauts take a 1-0 lead in this best-of-three series and go into tomorrow’s game looking to secure their ticket to the Isobel Cup playoffs.

Every single skater on Buffalo’s bench showed up against the Pride on Saturday, and that top-to-bottom performance was what earned the Beauts the win, starting with goaltender Jackson.

“Honestly, it just feels really eff-ing good,” said Jackson on her first NWHL win. “We’ve been doing a lot of things right even though things haven’t been going our way so far, and I think today was a result of us continuing to pull the rope and keep going no matter what.”

On top of Jackson’s 36 saves was the play of defender Chesson, who shone in her first game for the Beauts this season. She picked up the game-winning goal and quarterbacked the power play, but coach Perram said that Chesson’s impact went way beyond what she did on the ice.

“Having Cheese in the lineup, you guys saw it, it calmed the whole team down,” said Perram. “It provided a certain confidence, a certain swagger that we’ve been missing.”

Also embodying that confidence and swagger was forward Jordan Juron, who picked up the primary assist on both goals and who has been a huge boost to the Beauts throughout the bubble.

“I can’t say enough about Jordan. She wears her heart on her sleeve,” said Perram. “Today she really took a lot of the team on her shoulders. She really played well. When you see players coming off with beet-red faces because they’ve been battling so hard, that’s what you want, and that’s what we saw from Jordan every shift.”

In the first two periods of this game, Boston looked like they were doing everything they needed to win this game. They outshot Buffalo 26-10 in the first 40 minutes, including a stunning 14-2 in the second period.

“I think we got a bit caught in the long change in the second period. (Boston) is a good hockey team, that’s a really good hockey team,” said Perram. “And you allow them to gain full possession, it’s very difficult to manage.”

“There’s a couple we’ll need to clean up,” said Mara when asked about the team’s late penalties.

At this point, there’s not much Boston needs to change moving forward. Their offense is getting good opportunities, they’re possessing the puck more than their opponents – all they need now is for the puck to find the back of the net. Mara thinks his team can make that happen: