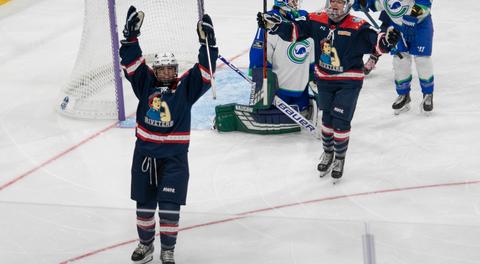 Both the Metropolitan Riveters and Connecticut Whale came into Sunday’s contest cruising; the Riveters were flying high after outlasting Toronto, and the Whale won a dramatic shootout against Buffalo the day before.

Both teams matched each other stride for stride most of the game, but the Riveters edged out their opponent thanks to a timely goal by Theresa Knutson early in the third period.

“Today was obviously a game that was not exactly how we wanted it to go all the way through, but what’s important is it’s a character win,” said Metropolitan assistant coach Ashley Johnston. “That’s really the definition of Riveter’s hockey – being able to grind it out, especially in the third period, winning every battle.”

Connecticut didn’t wait long to strike back; just over two minutes later, rookie Amanda Conway got the Whale on the board with her first NWHL career goal. Emma Vlasic struck later in the first to send both teams into the intermission tied up.

Rebecca Russo scored on the power play 4:56 into the second period to give the Rivs the lead, but Kaycie Anderson answered 10 minutes later to tie it back up.

Knutson’s goal in the third proved to be the game-winner. With the victory, the Riveters are the only team from the opening weekend to win both of their games in regulation.

Two former NWHL players were facing off behind the bench in today’s contest. NWHL fans will likely remember Ashley ‘Stretch’ Johnston, a fan-favorite during her time with the Riveters.

Though fans may miss her towering presence on the blue line, Johnston is loving her new role with Metropolitan.

“(It) feels great. My hips are quite happy we’re done playing,” joked Johnston. “It’s something I’ve always kind of thought about, so it’s really nice to be doing it, and quite frankly I love it. It’s a great group of girls, and couldn’t be happier with it.”

Behind Connecticut’s bench, today was Jamie Goldsmith, who played for the Whale for two seasons before taking her talents to the coaching staff. Like Johnston, she’s been thriving in her new role with her old club.

“It’s been really fun to be in a new role with the Whale. I care deeply about this club and it’s been so far to see where we’ve come from in a short period of time,” said Goldsmith. “For me, it’s been a real privilege and honor to step back and take a coaching position with this team that I played with…it’s been awesome.”

Besides their two goals early, the Riveter’s special teams both played critical roles in the team’s win. Russo’s go-ahead goal came on the power play, and the team’s penalty kill kept Connecticut off the board on all three attempts.

“I think any time you have those stats, you’re happy. Definitely wasn’t always the prettiest, but it’s something that we’re going to keep going with,” said Johnston. “It’s really nice for the PK side to have three sets of D that we can roll through, and I’m confident at any time that they can execute.”

Knutson spoke highly about the power play building chemistry, a key part of its success tonight. Defender Saroya Tinker spoke highly of the penalty kill as well, which has stayed true to classic Riveter’s hockey.

“In terms of PK, I think we did a great job. We’re a grinder team, we like to sacrifice the body and block those shots,” said Tinker. “Obviously we’ve got some work to do on the power play and the PK, but we’re coming together as a team, and we’re excited about it moving forward.”

Though the Whale hoped to come away with another win tonight, the team kept pace with the Riveters throughout most of the game. They outshot the Riveters 36-28, split the face-offs evenly with Metropolitan, and stayed within striking distance all night.

The Whale haven’t always been an offensively-minded team, and blueliner Shannon Doyle, who has been with the team since its inception, has seen the difference with this new team.

“If we look back at last season, I think maybe you could look at one game where we broke the 30 shot mark comfortably, and already in two games we’ve hit almost 50 and high 30s,” said Doyle. “We are producing, which is amazing, and we’re getting our shots and chances. It’ll come our way, we have a lot of really young, talented forwards like Amanda (Conway), on the other side of the bench.”

Assistant coach Goldsmith agreed, highlighting some of the young players who have made their presence known on the ice early in the season.

“Amanda (Conway) here had her first goal and several opportunities today…and we’ve got Kayla Friesen who was able to produce yesterday,” said Goldsmith. “I’m really happy with the mix that we have of vets and young talent coming up…the young kids are making adjustments really quickly to the pro game, they’re getting more confident and comfortable. I’m excited to see where we go from here.”