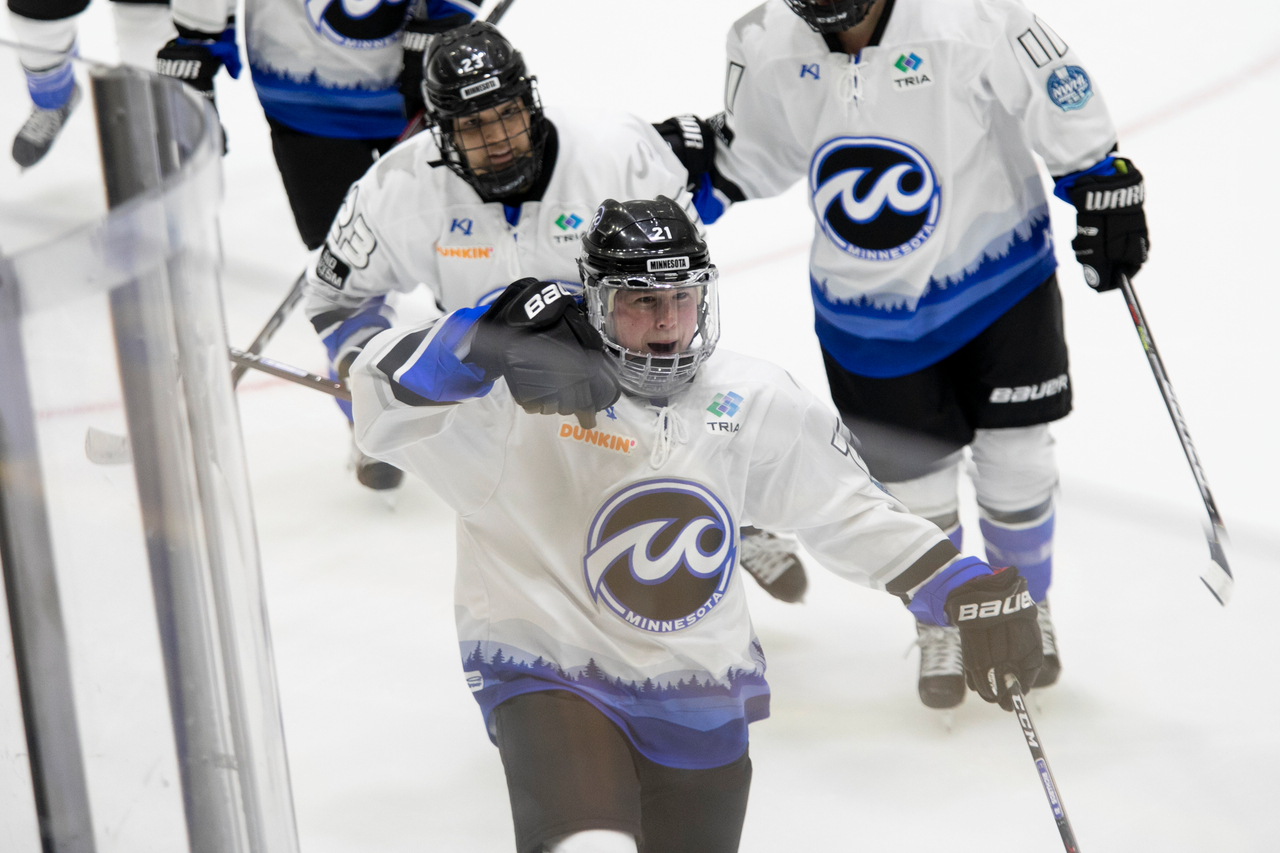 The Minnesota Whitecaps are headed back to the Isobel Cup Final with a 7-0 shutout victory over the Connecticut Whale in semifinal action at Warrior Ice Arena.

Amanda Leveille turned aside all 44 shots she faced while the offense did their part in a season-high output. Audra Richards scored the first hat-trick of the 2021 season and finished with a four-point performance matched by linemate Nina Rodgers who had four assists.

“Me and Nina, we are so positive with each other that we just have success and, I don’t know, we just kind of have fun on the bench and I think that translates onto the ice,” Richards told media post-game. “She’s a great playmaker and I’m big and I’ll get in front and I’ll put it in the net.”

This marks the third straight season the Whitecaps will be in the Isobel Cup final having won it all in 2019, then advancing to last year’s championship series just as the season succumbed to the COVID-19 pandemic.

“It was a big night for us,” said co-head coach Jack Brodt. “We probably played our best game of the year, I would say overall, from start to finish. Tomorrow is another day see and we’ll see what happens. But we’re glad to be in the championship and we’re going to do our best to bring the Isobel Cup back to Minnesota.”

The Whitecaps opened the scoring at 6:26 when Richards emerged with the puck from behind the net and found Haylea Schmid alone in front to make the most of her opportunity.

Moments later the Whale appeared to have tied the game only to have the on-ice call reversed with a video review showing the puck stopping short of crossing the goal line.

Allie Thunstrom, denied earlier by Whale goaltender Abbie Ives, made good on her second breakaway chance of the period with a backhand deke at 12:42 to put the Whitecaps up 2-0 heading to intermission.

Minnesota capitalized on a two-on-one rush just over two minutes into the second period as Rodgers found Richards with the cross-ice pass that needed a second effort shot to bury the team’s third goal.

The Whitecaps put things out of reach with two more second-period goals in a span of 35 seconds beginning with a Haley Mack tally at 6:16 then a second from Richards at 6:51.

Thunstrom’s second goal of the game and Richards’ third rounded out the scoring in the final frame.

Connecticut outshot Minnesota in all three periods finishing with a 44-31 advantage but just couldn’t beat Leveille.

“We showed a lot of resiliency in the bubble and even tonight,” Whale coach Laura Brennan said post-game. “We battled out there. We didn’t give up. We’re competing with every team in the League. Our team has improved a lot in the past year and we look to improve moving forward and will come back even stronger next season.”

The 2021 final now comes down to the two teams who never got the chance to complete their 2020 championship series as the Whitecaps meet the Boston Pride who won Friday’s first semifinal with a 6-2 triumph over the Toronto Six. Saturday’s game time is 7 p.m. ET televised on NBCSN and streamed on NBCSports.com and the NBC Sports app exclusively in the U.S., and streamed via Twitch in Canada and other international markets.