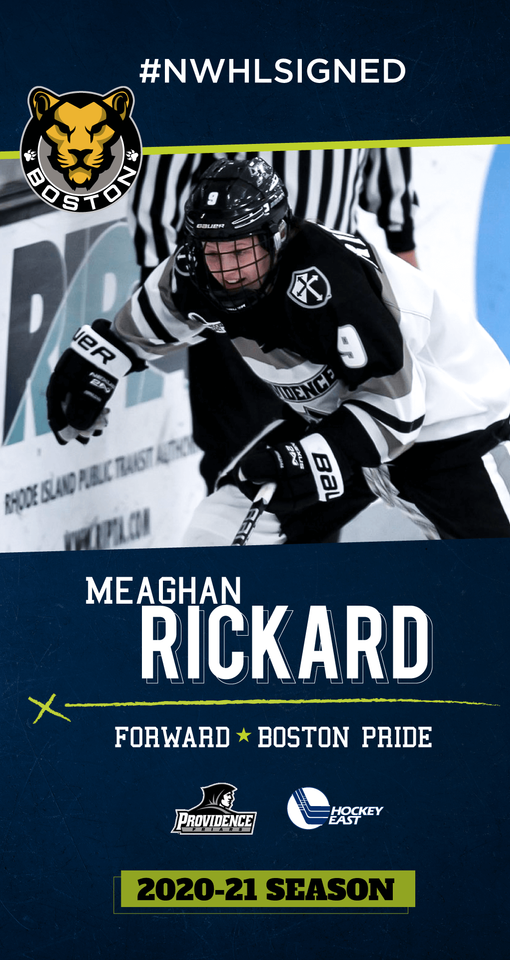 BOSTON – Adding outstanding depth to a stacked corps of forwards before the NWHL season begins next month in Lake Placid, the Boston Pride have signed Meaghan Rickard, a Rhode Island native who averaged 20 points per season at Providence College.

“Especially with all of the talent that the Boston Pride possess, I feel overwhelmed with excitement to be playing hockey with a championship-caliber organization,” said Rickard. “I’m very fortunate to continue my playing career with the Boston Pride organization. From the players to the staff, I am looking forward to growing my game and learning from those around me.”

From her first game as a Friar through her senior season, Rickard was consistently a force in all zones for Providence. Her season-by-season point totals were 20, 18, 22, and 20. In 146 games, the 5-4 forward scored 30 goals and added 50 assists for 80 points. Rickard was named a Hockey East Top Performer three times each in her sophomore and junior seasons. As a freshman, she earned team honors as Most Improved Player.

Rickard becomes the third Friars player from the Class of 2020 to sign with the NWHL for the upcoming season in Lake Placid, joining Whitney Dove and Neve Van Pelt, who is playing for Buffalo.

Prior to attending Providence, Rickard developed as a player in the Assabet Valley and Massachusetts Spitfires programs, and at La Salle Academy and Williston Northampton School. Rickard’s mother, Elizabeth, played lacrosse at Northeastern and was captain her senior year.

“Meg has been an excellent addition to our team,” said Boston GM Karilyn Pilch. “She is a scary-quick skater who brings another level of speed to our forward lineup. Meg will build upon her impressive career at Providence as she becomes a professional and her development is further enhanced by having access to all of the great coaches, players, and resources we have with the Boston Pride.”