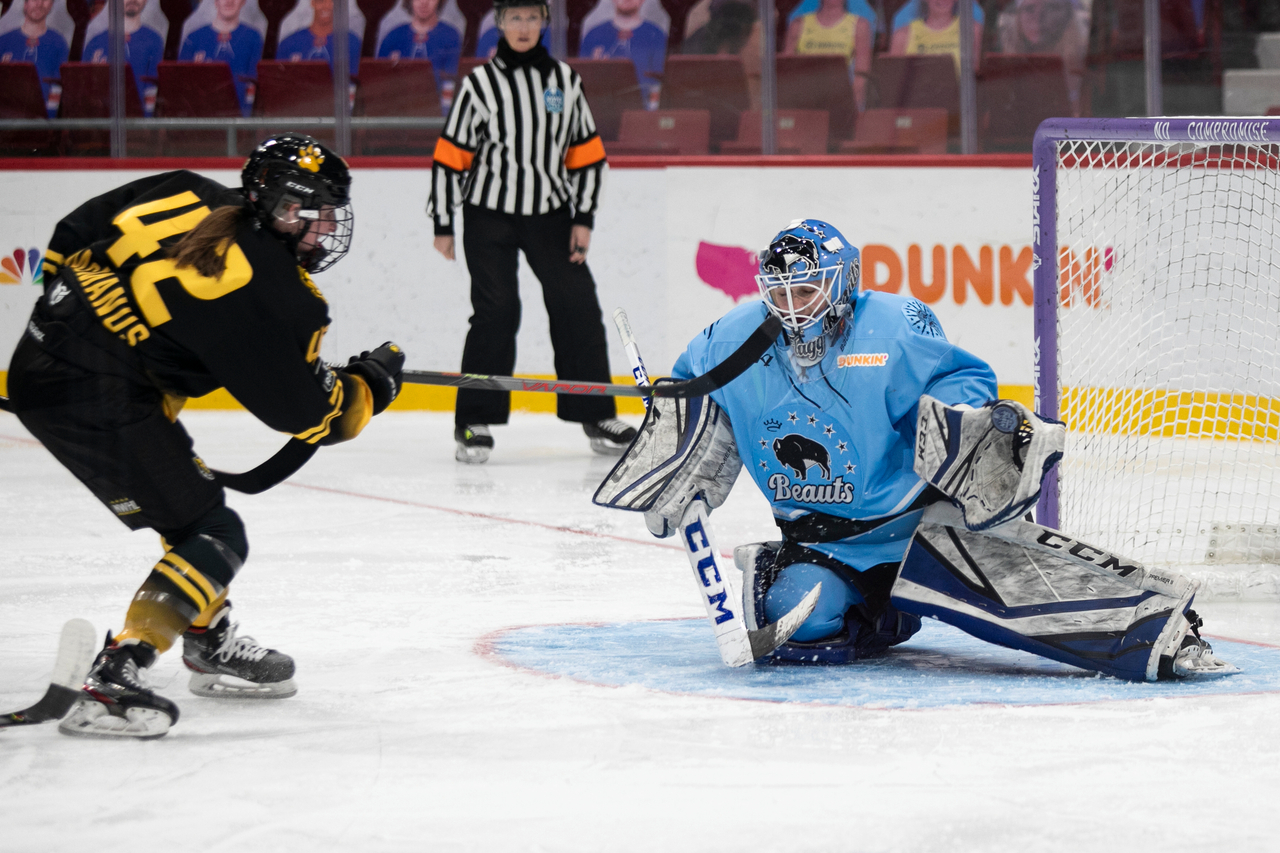 Boston finally got the hockey gods on their side, and not a minute too soon.

With their season on the line, the Pride picked up a 6-0 shutout win against the Buffalo Beauts in the best-of-three series. The win forces a deciding Game 3 tomorrow night, and the winner of that game will make the Isobel Cup playoffs as the No. 4 seed.

The Pride’s scoring woes have plagued them through most of the bubble season despite their strong pressure in the offensive zone, and things finally went their way against Buffalo.

“I think it was a matter of time before we got the offense going, so it’s great to see that finally come together,” said Mallory Souliotis.

Souliotis opened the scoring for Boston on the power play off of a gorgeous feed from Christina Putigna to set her up with a wide-open net.

McKenna Brand made it 2-0 on a fortuitous bounce off the end boards. Putigna dumped the puck in for a line change, and it bounced right back to a charging Brand, who roofed it past Jackson.

Sammy Davis added one more in the middle frame, a wicked snipe from the slot with just four seconds left to send the Pride into intermission with a 3-0 lead.

Souliotis added another goal of her own less than three minutes into the third period, another blast from the point that got through traffic and past a screened Jackson; the Beauts pulled Jackson after that tally and put in backup goalie Caty Flagg.

A few minutes later, Lauren Kelly added a fifth goal from the blue line, and Meghara McManus finished off the scoring with her first career NWHL goal.

“Yesterday’s game, we ate the bear, and in today’s game, the bear ate us.”

Boston back to normal

This was the Pride team most people were expecting to come into the bubble. By no means has Boston played poorly, often quite the opposite – but you realize just how skilled this squad is when the bounces go their way (in some cases, literally – ask Brand).

It was Boston’s depth that shone again tonight, particularly players like Kaleigh Fratkin (three assists) and Putigna (three assists). Both are stars in their own right, and when you have that many talented players in a lineup, good things are going to happen.

“(Putigna) is just such a terrific player, she wins battles down low, she’s always making plays, I think she’s really come into her own here in Lake Placid,” said Souliotis.

She was equally complimentary when asked about her defensive partner, Fratkin.

“She’s the best defenseman in this league, no doubt, and it’s great to finally get things going with her. I think she’s so underrated,” said Soulitis. “She really helped spark the offense today.”

When you get shut out and your team allows six goals, it’s easy to get stuck in your head and focus on the negatives. Not so with the Beauts.

“First two periods wasn’t our best, we know that, we talked about it in the locker room, we hit reset,” said Taylor Wasylk. “We definitely are looking to move past this as quickly as possible, and I think we did that in our third period.”

Despite the end result, the Beauts kept up with the Pride on shots, firing 31 shots against Boston’s 36. They also mostly managed to stay out of the penalty box, committing just three infractions and killing off two of those. And while three of Boston’s goals came in the third period, the last 13 minutes was a tighter defensive effort from Buffalo.

“Really good stuff happened at the end of the game. We tightened up our D zone, we kept their shots low, we got a lot more shots on them today than we did yesterday when we won, so lot of positives coming out of it,” said Wasylk.

The Beauts are ready for their third game tomorrow, and have every confidence that they can get the win.

“In the end, this is just a bump in the road,” said Perram. “We’ve put ourselves in a position to win and go to the semis, and we’re going to do that.”

previous
Connecticut, Toronto to meet on Sunday
next
Whale still fighting for No. 2 spot