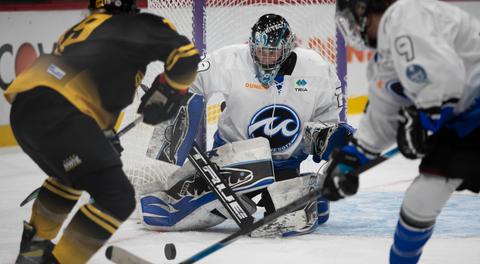 In a season of second chances the 2021 Isobel Cup Playoffs, presented by Discover, comes down to a pair of teams who serendipitously reunite for a rematch of 2020 final that never got played.

Fast forward to this season and the clubs are alone on top once again. The shortened Lake Placid campaign led to Friday’s semifinal seeding where a 6-2 Pride victory eliminated the top-ranked Toronto Six, and a 7-0 shutout by the Whitecaps knocked out the Connecticut Whale.

“A year ago, or a year 2 weeks ago, we were ready to jump on a plane and head here to play the 2020 championship. And everything that has happened and transpired in the last year to now being essentially in the same spot,” Whitecaps forward Allie Thunstrom told reporters late Friday night.

“It was a different route that it took to get here but there is definitely something special about it. It’s special either way just to be in the championship. But you know from an outside view, and even for us too, it is something really cool to have the opportunity to play Boston in Boston just like it was supposed to be a year ago.”

The Whitecaps are still defending Isobel Cup champions having hoisted the NWHL’s top prize in 2019 following a dramatic 2-1 overtime win over the Buffalo Beauts. Thunstrom is one of seven players lining up in Boston who skated in that game along with fellow forwards Jonna Curtis and Meaghan Pezon, defensemen Amanda Boulier, Winny Brodt-Brown, Chelsey Rosenthal, and goaltender Amanda Leveille.

On the other side, Pride captain Jillian Dempsey, who shared MVP honors with Thunstrom a year ago, is the lone member of the club’s Isobel Cup title in the league’s inaugural 2015-16 season. No matter the outcome, for the first time in the league’s six-year history the Isobel Cup will go to a team that has won it before.

While Minnesota is officially the game’s home team, there’s no denying Boston’s at home and the players have savored the moment thus far.

“I was very excited just to play at Warrior for the first time,” Pride rookie forward Taylor Turnquist said post-game. “It was a great experience and to get the win it was even better. But I’m excited about tomorrow. I know what it’s like to win one national championship (Clarkson University) and I anticipate winning the Isobel Cup. I hope we can carry all this (momentum) into tomorrow’s game.”

With two points in Friday’s semifinal, Christina Putigna leads the Pride in overall 2021 scoring 10 points in eight games, followed by McKenna Brand whose two points last night bring her total to nine. Nina Rodgers had four assists for the Whitecaps in Friday’s win and continues to lead the team with 10 points in five games, followed by Audra Rodgers who also had four points on Friday including the season’s first hat-trick to bring her 2021 total to eight points.

The clubs met most recently on January 23 in Lake Placid with Minnesota earning the 2-1 triumph, however last season it was Boston that won three of four meetings. The Pride’s only loss of the 2019-20 season was against the Whitecaps by a 4-3 score on the road on January 25.

Puck drop for Saturday’s Final is 7 p.m. ET at Warrior Ice Arena and can be seen live on NBCSN and streamed on NBCSports.com and the NBC Sports app exclusively in the U.S., and streamed via Twitch in Canada and other international markets.