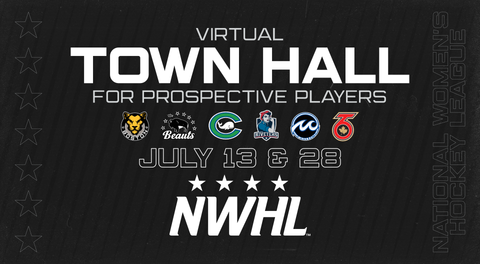 The new program offers two free interactive sessions for players to choose from on Tuesday, July 13, and Wednesday, July 28 both beginning at 8:00 p.m. ET via Zoom. The event will introduce members of the league’s senior leadership team along with ownership and player representation who will provide transparent details on topics such as the league’s vision, programs and policies, and enhanced player benefits.

REGISTRATION FOR THE EVENT IS ONLINE AT NWHL.ZONE/2021-TOWN-HALL

“Players are the most important part of the NWHL and for building a sustainable future for professional women’s hockey in North America,” said Commissioner Tyler Tumminia. “We want to give athletes the opportunity to hear firsthand exactly who we are and what we stand for so they can make informed decisions about their professional hockey careers. This is a new era for the NWHL that has experienced a lot of change over the past year. We’re proud of how far we’ve come and are excited to share more about where we’re headed.”

These Town Hall meetings are open to all players interested in learning more about the NWHL including those with professional experience competing in North America or in International leagues as well as NCAA and USPORTS programs regardless of their current eligibility. Additional Town Hall events may be planned ahead of the 2021-22 season for various stakeholders such as media and fans.

On June 29 a total of 30 players were selected in the 2021 NWHL Draft which was presented for the first time in league history live on Twitch, and on July 25 another six players will be introduced in the inaugural International Draft. The NWHL is coming off a record-setting Season 6 with landmark corporate sponsorships, historic broadcast partnerships, and all-time highs for digital engagement that led to the monumental salary cap increase up to $300,000 per team for Season 7. Off-season highlights thus far also include a new community partnership with Athlete Ally, and the sale of four franchises to officially put all six of the league’s teams in the hands of independent ownership.

Click here to register for NWHL Free Agency and here to view a list of all Player Benefits.