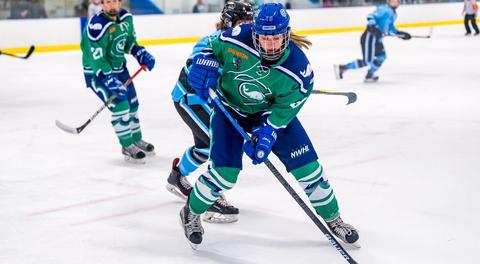 In six NWHL seasons, a total of 21 players from international countries have hit the ice, and with the inaugural International Draft coming up on July 25 that number is expected to grow.

But before the picks are announced, it’s only fitting to recognize Janine Weber who blazed a unique trail in her journey from overseas to the NWHL.

In fact, the Austrian wasn’t just the first European player in the NWHL, she led an entire professional women’s hockey movement signing the league’s very first free-agent contract on June 11, 2015.

Since then the 30-year-old has played 60 career regular-season games over five seasons split between the New York Riveters, Boston Pride, and Connecticut Whale amassing 16 goals and 26 assists for 42 points.

“I remember not really knowing what it was going to be like,” Weber says of her first NWHL season. “When the league was founded we had a front-row seat to everything that year. Seeing the amount of work put in by everyone, how appreciative the players were because this was such a new thing. I was excited about being paid to play hockey.”

Weber grew up playing on teams with boys until she was 13 then made the jump to the Red Angels in her hometown of Innsbruck, competing in Austria’s top women’s league with players more than twice her age.

Her exposure to North American hockey started to grow throughout her teenage years watching internet highlights of rising stars like Hilary Knight, and competing in her first of many IIHF events where she became familiar with fellow under-18 talents like Marie-Philip Poulin dominating the top division.

Then as more players from the United States and Canada came to Austria to play as imports, Weber’s eyes were opened even wider to the North American style. That’s how she met Kiira Dosdall-Arena, another would be NWHL original, who joined the EHV Sabres right after her NCAA career at Colgate University. The pair were teammates and roommates from 2009-13 until Weber made a big move of her own enrolling at Providence College.

“I was always interested in playing in the United States,” she said. “Kiira was influential in helping me connect with coaches.”

After a season with the Friars, Weber stayed in New England and played in the CWHL as a member of the Boston Blades. She scored the overtime winner to capture the 2015 Clarkson Cup alongside Knight, Brianna Decker, Blake Bolden, Jillian Dempsey, and Kaleigh Fratkin among others.

“Winning the Clarkson Cup was a highlight. The talent was unreal,” she said. “It was surreal sharing the ice with players you look up to. Practicing with and playing against players on the American and Canadian National Teams. It was amazing to be on the ice and you appreciate them as teammates seeing what they can do.”

Weber reunited with Dosdall-Arena during her first NWHL season on the Riveters and forged new bonds with players like Bray Ketchum who later served as GM in Connecticut and would sign her to her first contract with the Whale, and Celeste Brown who she works with now at OverSpeed Hockey and travels with all over the world coaching and developing the game’s next generation.

“I remember some of our first games playing in packed rinks,” Weber said. “The place was buzzing. Those are memories you don’t forget. We hoped this league would be around for other players and would grow. There’s been a lot of progress with private ownership and big sponsors. A lot of people know about the league now and there is a network of alumni that is growing and things are improving for Season 7.”

Among the league’s developments is the aforementioned International Draft that will help grow professional women’s hockey and provide new opportunities for players in North America who might just have the same dreams that Weber once had.

“Most professional leagues that want to claim to be a premier league have international players,” she said. “It’s cool the league wants more European players. I think it’s a cool opportunity for players who didn’t come to college to play in North America. I hope players get the chance to move here, to play, and experience different things. A lot of players might have a dream to come.”

For now, Weber’s dream is to represent her country at the Olympics. She’s already played in 10 World Championships for Austria but has her sights set on November’s qualifying tournament in Germany. With any luck, they can earn a place in Beijing and inspire more youth in her native land.

“Hockey is still very young in Austria,” she said. “Some of the girls I looked up to still play and have been together for 10 years now. When I was younger I looked up to other athletes in men’s hockey or female skiing. It helps now having more role models.”

And in the NWHL, after missing out on a semifinals appearance to injury back in March, the veteran forward is getting back into game shape and strength preparing for another pursuit of an Isobel Cup title with the Whale.

“We knew we had a good team and we surprised some people on the outside with how well we played,” Weber said. “We made a lot of progress, but going into the season it’s hard to gauge where you are. We have some new players coming in that I’m excited for. We’ll be a tough team to play against.”