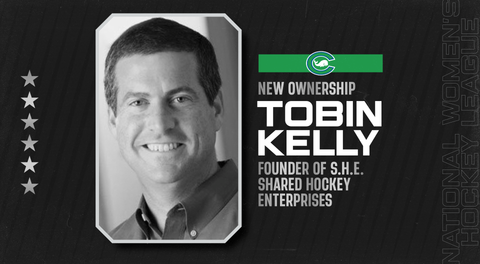 The National Women’s Hockey League (NWHL) today announced that the league’s board of Governors have approved the sale and transfer of ownership of the Connecticut Whale Hockey Club to purchaser Shared Hockey Enterprises (SHE), LLC owned by Tobin Kelly and his investment partners. The Whale are one of four NWHL teams owned and operated by W Hockey Partners.

“It has been our goal since transitioning to a joint venture model in October to find strong ownership groups who believe in the NWHL and recognize the growth potential for the league and professional women’s hockey,” said NWHL Commissioner Tyler Tumminia. “Tobin’s commitment to supporting our athletes, building community partnerships, and enhancing the fan experience represents another significant milestone in league history as we prepare for our seventh season.”

As a Managing Director, President, and COO with different organizations, Kelly has been leading companies through growth and transition as an M&A specialist and operator for over 20 years. In addition, Kelly has coached girls and young women at the youth and high school levels, is the founder of Arc Hockey, and established the Youth Pond Hockey Festival to benefit the Laura Foundation, the largest outdoor youth hockey tournament in the United States. Kelly and each of his co-investors from SHE are passionate hockey fans, players, and coaches who are all dedicated to growing the sport of women’s hockey.

“All of us who have established SHE are excited to continue the amazing growth made by the NWHL and to fulfill the NWHL’s goal of providing the opportunity for elite women athletes to earn a living wage playing the sport they love,” said Kelly. “Finalizing the purchase of the Whale with my co-investors is the culmination of a dream that I have held for decades. I am excited to get to work with the Whale players and staff to continue their great work and bring new resources to growing the Whale’s presence in Connecticut.”

The Whale are one of the Founding Four teams to play in the NWHL’s inaugural 2015-16 season where they posted a franchise-best 13-5 record. In 2020-21 they advanced to the Isobel Cup Playoffs with a roster that largely consisted of players either born or raised in New England or who played collegiate hockey in the region. There were five Connecticut natives on the team including Maddie Bishop, Sarah Hughson, Maeve Reily, Melissa Samoskevich, and Brooke Wolejko. Northeastern Huskies alumna Alyssa Wohlfeiler led the Whale in scoring ahead of former Yale Bulldog Emma Vlasic and recent University of New Hampshire Wildcat Tori Howran. Captain Shannon Doyle, a member of the team for all six seasons, holds the club’s all-time games played record and was a finalist for NWHL Defender of the Year. Grace Klienbach was the team’s Foundation Award recipient for actively applying the core values of hockey to her community as well as growing and improving hockey culture.

“This is an exciting time for the entire NWHL but most importantly for our players, dedicated partners, and loyal fans,” said WHP President Andy Scurto. “We are proud of the organization’s history as a founding member of this league and are confident that Tobin’s passion and energy will honor that tradition and that he and his team will establish a new standard for Whale hockey.”

The 2021 NWHL Draft will take place on Tuesday, June 29 with the Whale currently holding the second overall pick. The league also recently announced the salary cap for the 2021-22 season will double to $300,000 per team following a record-setting campaign for sponsorship activation, broadcast partnerships, and digital fan engagement.