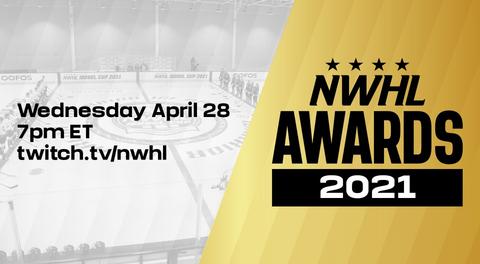 The NWHL will honor excellence on the ice and in the community with the unveiling of award winners, as determined by the media selection committee, in a special edition of “NWHL Open Ice” on Twitch hosted by Katie Gaus that will stream live at twitch.tv/NWHL on April 28 beginning at 7:00 p.m. ET.

Defender of the Year: Most excellent performance by a defender

Goaltender of the Year: Most excellent performance by a goaltender

Newcomer of the Year: Most excellent performance by a player competing in their first full season in the NWHL

Denna Laing Award: Awarded to the player who most exemplifies the qualities of perseverance, sportsmanship, and dedication to her sport

Given the uniqueness of the 2021 campaign, performances across all regular-season games in Lake Placid, as well as playoff games in Boston, could be considered by the selection committee.

Additional honors including the NWHL Foundation Awards, Fans’ Three Stars of the Season, and an assortment of player-selected recognitions will also be announced on April 28.