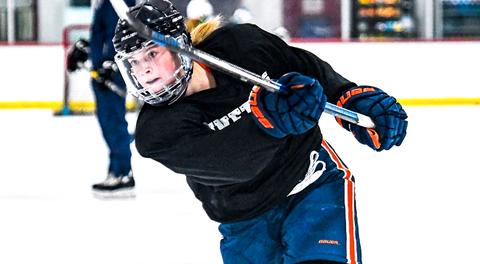 NJ/NY – Adding depth to their blueline as Season 6 approaches, the Metropolitan Riveters have signed New Jersey native Allie Olnowich, who completed a standout collegiate earlier this year at Syracuse University.

“Growing up, it’s always the dream to play pro hockey, and I’m so proud to say I’m playing for my home team in New Jersey,” said Olnowich, who turned 22 in July. “I’m thankful for the opportunity to join the Riveters during this historic season, and I can’t wait to play some games.”

Olnowich played 131 games in her four years at Syracuse, never missing a game in her last two seasons. As a junior, she scored the game’s first goal and added an assist in Syracuse’s victory over Robert Morris in the CHA Tournament Final, giving the school both its first conference title and qualification for the NCAA Tournament.

“In our recent practices, Allie has proved herself to be a valuable member of the Rivs’ defensive group,” said Riveters head coach Ivo Mocek. “She’s very athletic, a great skater with a hard shot, and has a fantastic attitude. Her addition gives us the needed depth on the back-end we were missing last season. I am very excited that Allie is joining the Riveters.”