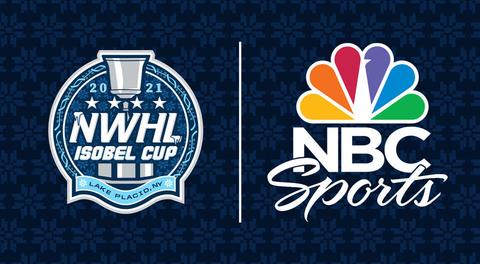 Exclusive Coverage Live on NBCSN and Streams on NBCSports.com and the NBC Sports App

The single-elimination Isobel Cup Semifinals will be shown live on Thursday, Feb. 4 at 5:30 p.m. ET and 8 p.m. ET. The winners of the semifinals will advance to the Isobel Cup Final on Friday, Feb. 5 at 7 p.m. ET. In addition to coverage on NBCSN, live coverage will stream exclusively on NBCSports.com and the NBC Sports app.

“Our partnership with NBC Sports is monumental for the visibility of the NWHL,” said Commissioner Tyler Tumminia. “Never before has women’s professional hockey had the opportunity to reach so many people on American television in the United States. As we have seen with the WNBA and NWSL this year when women’s major league sports leagues are given a strong showcase, viewership is increased and countless new fans connect with the teams and players. NBC Sports provides the NWHL’s biggest games in our upcoming season in Lake Placid with best-in-class production and award-winning announcers. The NWHL will deliver intense, memorable hockey for the viewers on NBCSN as an Isobel Cup champion is crowned.”

“As the home of hockey in the U.S., NBC Sports is proud to showcase the NWHL to a national audience,” said Michael Perman, vice president, programming, NBC Sports. “These historic broadcasts on NBCSN further our commitment to showcasing the game at all levels.”

Prioritizing the health and safety of the players, staff, and all involved, the NWHL is playing its sixth season and the 2021 Isobel Cup Playoffs in a centralized and protected environment at the iconic 1980 Rink – Herb Brooks Arena in Lake Placid, N.Y., between Jan. 23 – Feb. 5, 2021. The competition will feature the NWHL’s six teams – Boston Pride, Buffalo Beauts, Connecticut Whale, Metropolitan Riveters, Minnesota Whitecaps, and first-year expansion club Toronto Six