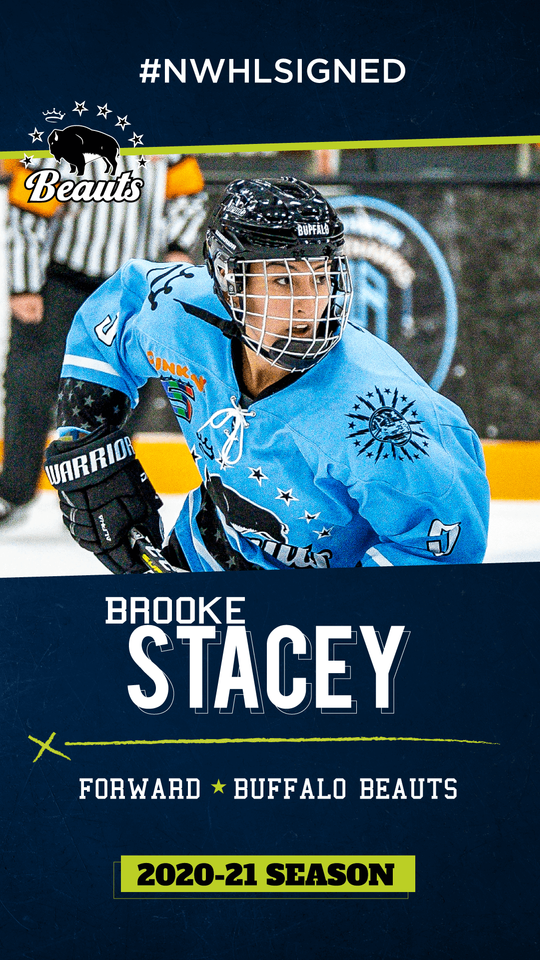 BUFFALO – NWHL All-Star forward Brooke Stacey, who averaged more than a point per game last season, has re-signed with the Buffalo Beauts and will be in the lineup during the league’s upcoming season in Lake Placid.

As a rookie in 2019-20, Stacey had 8 goals and 8 assists for 16 points in 14 games and was selected to play in the NWHL All-Star Game in Boston. On Feb. 4, it was announced that Stacey was expecting her first child. In her final appearances of the season, she participated in the All-Star Skills Challenge Shooting Accuracy competition and the introductions for the All-Star Game. This past summer, Stacey gave birth to a baby boy.

“I am extremely excited and grateful to be returning to the Buffalo Beauts and the NWHL,” said Stacey. “I want to be a role model for new moms, showing that it is possible to compete at the highest level even after a couple of months postpartum. The NWHL continues to make strides in bettering the league for all its players, and that’s something I am proud to be a part of.”

The addition of the high-skilled 5-10 forward is a significant boost to Buffalo’s chances for success when the NWHL’s sixth season takes place next month in Lake Placid. Stacey registered a point in each of her first nine games of the 2019-20 season. Five of Stacey’s games were multi-point performances, and she was the only Beaut last season to finish the campaign as a plus player.

In 134 games over four seasons at the University of Maine, Stacey was 41-46-97. During her senior season, she finished second on the team in points with 30 points on 13 goals and 17 assists in 36 games. As a junior, Stacey finished tied for first on the team in points with 28 (15 goals, 13 assists) and was named Hockey East All-Star Honorable Mention. On the Beauts, she is reunited with former Black Bears teammates Alyson Matteau and Carly Jackson.

Raised on the Kahnawake Mohawk Territory in Southern Quebec, Stacey is a Kanien’kehá:ka tribal member. She has played in the Canadian National Women’s Team development program, winning a gold medal at the 2014 IIHF U18 World Championship. In 2017 and 2018, she played for Team Canada at the Nations Cup.

“Brooke’s return to our roster for Lake Placid is big for the Beauts,” said Buffalo GM Nate Oliver. “We are very proud of her commitment and the strides she has made to be game-ready in such a brief period of time. It’s a reflection of how much Brooke loves the game and her team. We are so happy to have Brooke back.”

previous
Our Statement on Diversity and Inclusiveness in Hockey
next
Hey Stripes! The Micd Up GoPro Hockey Ref - Game 151 - Diet Coke