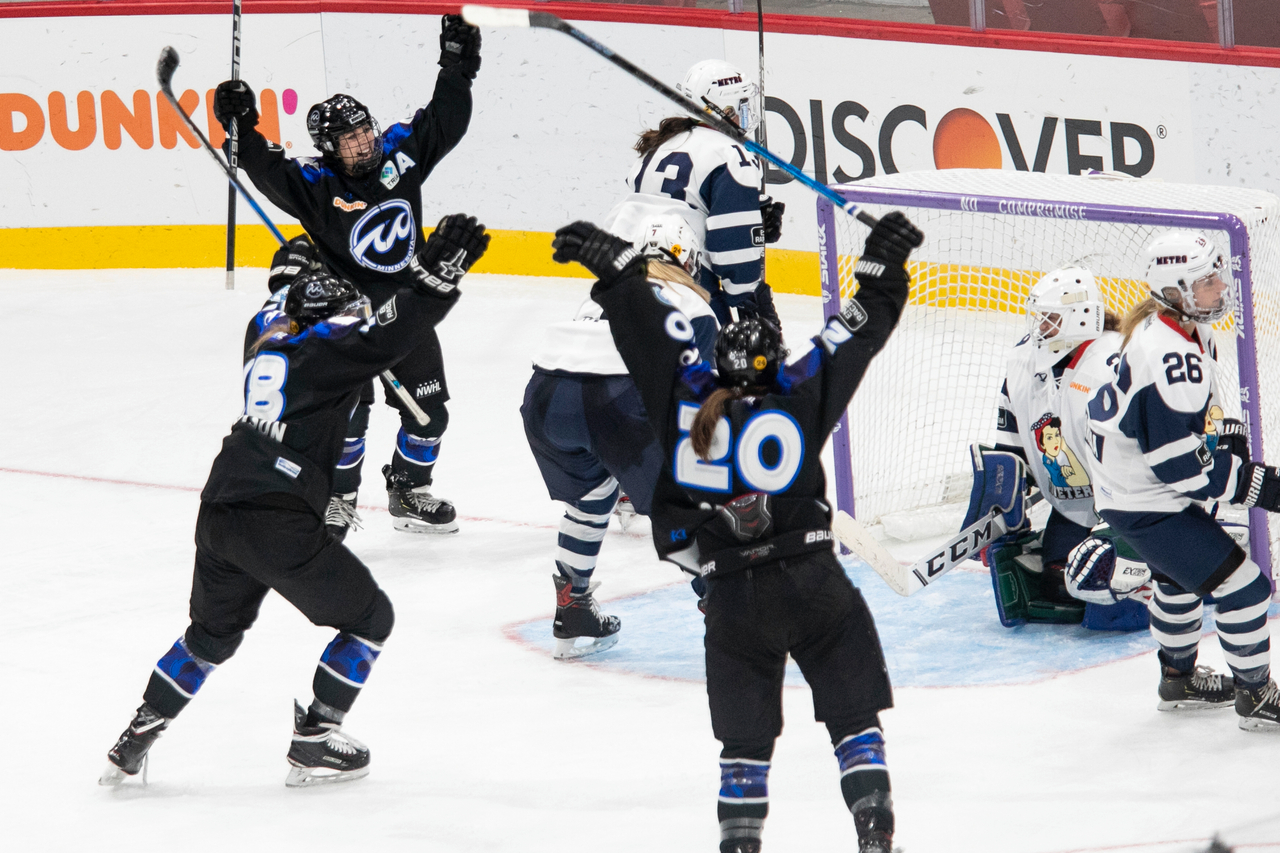 Both the Riveters and the Whitecaps went into today’s contest undefeated; the Whitecaps bested Boston and Toronto while the Riveters topped the Six and the Whale over the weekend. With an undefeated streak on the line, Tuesday night’s game had a playoff atmosphere, and the play on the ice didn’t disappoint, as ultimately the Whitecaps squeezed out a 1-0 victory in the game’s dying moments.

The game stayed scoreless for nearly 60 minutes, though not for lack of trying. In addition to the lavender posts, which made several saves of their own, the most impressive players in the game were the goaltenders. Amanda Leveille was perfect in net, stopping all 38 shots she faced, while Sonjia Shelly was lights out for the Riveters, stopping 36 shots. Many of those saves were on breakaway opportunities or with several skaters crowding her crease.

“From the very start of the tournament, I’ve been feeling really good about myself and how I’ve been playing. I feel like I’ve been seeing the puck really well,” said Shelly.

While fans and media alike were excited by Shelly’s remarkable play, the Whitecaps knew going into the game that the netminder was going to be a factor.

“We knew going into the game the Riveters were a very strong…team, they’ve had very good goaltenders in the past year and Sonjia Shelly today was unbelievable,” said Leveille. “I don’t think that was a 1-0 game, I thought we should have had three or four more. She played phenomenal.”

Shelly and Leveille traded point-blank saves all evening, and the game seemed destined to go to OT. Unfortunately for Metro, a couple of late penalties ended up deciding the game. With less than a minute to go, defender Rebecca Morse took a holding penalty, and just 14 seconds later Madison Packer was whistled for holding. The Whitecaps’ newest rising star, Haley Mack, scored on the ensuing 5-on-3 power play with just 10 seconds left in the game to seal the two points for Minnesota.

This time around, it was another familiar face who scored the game-winner for Minnesota, though not an established veteran. Mack, who picked up the game-winning goal in the shootout for the Whitecaps just a few days prior, was the goal-scorer for the Whitecaps on Tuesday, earning herself a new nickname in the process.

“I had full faith in my teammates that we were going to score on the 5-on-3, and ‘Superstar’ over here just netted another goal for us,” said Leveille, looking over at Mack.

In her three games with the Whitecaps, Mack has picked up two goals during regulation and notched another in the shootout. She’s turning into one of the Whitecap’s most clutch performers, and certainly a player to keep an eye on.

Despite their first loss of the season, the Riveters didn’t look at all out of place skating with the defending Isobel Cup champions. Metropolitan outshot Minnesota 38-37, and veteran players like Kiira Dosdall-Arena has noticed how this group feels different compared to Riveters’ teams in the past.

“I’ve been on the team all six seasons – this is the strongest team I think I’ve been a part of, and I mean that in the full sense of the word team,” said Dosdall-Arena. “We work really hard, so we’ve kept the grit that makes the Riveters the Riveters since season one, but we’ve added some talent, some great coaching…we have the confidence to play against any team.”

The game seemed under control until the very last minute of the play, when emotions ran high and those two quick penalties sent Morse and Packer to the box. Overall, the Riveters have done a good job of keeping their penalties in check this season, but the tension of tonight’s game seemed to boil over at the end.

“We were playing a hard, gritty game and I think doing a pretty good job of staying right on that fine line, and then at the very end…we just went over it,” said assistant coach Ashley Johnston. “If anything, I’d rather see people wanting to win and having to dial that back a little bit than not having that fight in them. It’s something we’ll work on.”

Though tonight’s result was disappointing, the Riveters aren’t looking to change their style of play any time soon.

“This was an awesome battle today, (Minnesota) is a great hockey team, but we know we can play with them,” said Dosdall-Arena. “We definitely have a ton of confidence moving forward.”

previous
Boston bounces back against Buffalo
next
Buffalo, Metro to square off Wednesday night