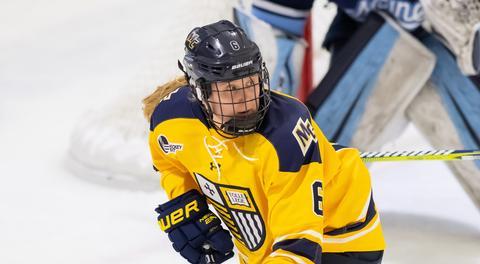 NJ/NY – Paige Voight, a dynamic, all-zone forward who was among the leading scorers at Merrimack during her collegiate career, has signed a contract to join the Metropolitan Riveters for the upcoming NWHL season.

Voight led Merrimack in scoring in her freshman year in 2015-16 and was second on the team in scoring as a sophomore (one point behind Mikyla Grant-Metis, now a member of the Toronto Six). In 2015, she won a gold medal at the IIHF Under-18 World Championships with the U.S. National U-18 Team.

“The NWHL has done an outstanding job creating a platform for younger players and continuing to advance the game, and now I am very excited to continue my playing career in the pros with a great organization like the Riveters,” said Voight. “It’s going to be a thrilling season and I cannot wait to get on the ice with the Rivs.”

“The main goal of this offseason was to add some offensive depth, so once there was a chance to sign Paige Voight, Kate and I did everything we could to get it done,” said Mocek. “Paige is a very strong offensive talent with international hockey experience, and she had an outstanding college career at Merrimack. She will bring exactly what the Riveters need.”

previous
PWHPA This Month! November 2020
next
Don Cherry - on women at hockey games