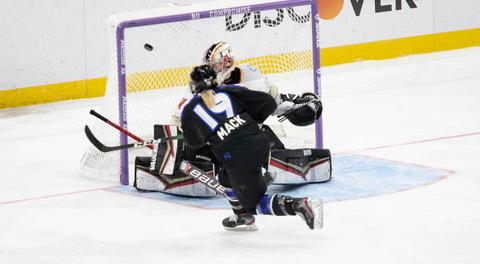 After falling behind early on Sunday, the Whitecaps were looking to bounce back in a major way against Toronto.

In the end, Minnesota came back from a 5-1 deficit to force overtime and prevailed in the shootout thanks to a goal from Haley Mack in the fifth round.

The Six scored three times in the first 15 minutes of the game to take a commanding 3-0 lead. Lindsay Eastwood struck first on the power play off of a beautiful pass from Brooke Boquist.

Just over two minutes later, Mikyla Grant-Mentis went bar-down between the dots to give Toronto a two-goal lead. While Allie Thunstrom sat for interference, Breanne Wilson-Bennett picked up a perfect pass from captain Shiann Darkangelo from the slot and sent it past goaltender Samantha Ridgewell.

The Whitecaps got a much-needed goal on a power play of their own when Sydney Baldwin blasted one past Leveille, but the Six added to their lead shortly after with a goal from captain Shiann Darkangelo in the second period. Emily Fluke made it 5-1 for Toronto at the 18:28 mark.

Even when all seemed lost, Minnesota found a way to keep clawing back into the game. With just over two minutes remaining in the second, Haylea Schmid picked up some loose change in the slot to make it 5-2, and 49 seconds later Mack picked up her first NWHL goal to make it 5-3 after 40 minutes.

“I’d say in the second period, the last two minutes, those goals were a big momentum changer for us,” said Minnesota captain Winny Brodt-Brown. “We know we have it, obviously we scored all those goals, we’re very offensive-minded team. That just gave that the confidence and momentum going into the third.”

Thirteen minutes into the final frame, Audra Richards gave the Whitecaps an enormous boost with a shorthanded goal, and Meaghan Pezon tied it up 83 seconds later.

“I was so proud of our girls for battling until the very end,” said Whitecaps assistant coach Laura Slominski.

The parade to the penalty box was a constant for both teams during this game. The Six finished the contest with six infractions and the Whitecaps wound up in the box a whopping 11 times.

It stung especially hard for Minnesota; just the day before, head coach Jack Brodt praised their penalty kill against Boston.

“Yesterday we had a really good day of killing, and today we started really slow. You have to give a lot of credit to (Toronto), they have a great power play and they found the holes that we had,” said Slominski. “I was really proud of our team, we made some adjustments down the final stretch and we were able to kill off penalties that we weren’t able to in the beginning.”

At the other end of the ice, the Six scored three times on their red hot power play. Murphy credited her assistant coaches Lisa Haley and Spiros Anastas on the hard work they put in, and it showed in the team’s play on the ice.

“We put a lot of work in our practices on special teams. I think at this level that can be a difference-maker, and I think our power play started to click today, and I think it came from the hard work in the corners,” said Wilson-Bennett. “They’re a pretty aggressive team on the PK, and I think possession over position kind of worked in our favor.”

Nine different players found their way on the scoresheet for Minnesota, a testament to their depth all the way down the lineup.

“Our depth is definitely one of our strengths. In Minnesota we kind of pride ourselves on hockey, growing up all through the rinks and even into college hockey,” said Smolinski. “It’s fun to see so many of our kids come back and want to play for the Whitecaps.”

Despite the heartbreaking loss, Murphy said that she was impressed with the team’s play, calling it a “night and day difference” from Saturday’s game against the Riveters.

Their improvement on the ice was easy to see, especially during the first two periods; the Six’s top line of Darkangelo, Boquist, and Emma Woods and their third line of Marcuzzi, Wilson- Bennett, and Mackenzie MacNeil both had especially strong games, as did Mikyla Grant-Mentis. It’s an encouraging sign to see that Toronto’s offense is raring and ready to go after running into a hot goaltender against the Whitecaps.

Minnesota made the decision to start Leveille in her second consecutive game. It took her a while to get settled in, she found her groove and ended up with 30 saves and a W; though she did tweak something during the play that called backup Allie Morse to cover for her at the end of the first period.

“Leveille is unbelievable, you saw her yesterday. She actually got a little bit nicked up for a moment…that’s why we called the timeout. She needed (to get) something looked at, and then she was good to go,” said Slominski. “She showed a lot of grit today, just like our whole team has.”

Rookie Ridgewell took the loss but had a strong performance in her NWHL debut against an experienced Minnesota team. Two of the five goals she allowed were on the power play and one was a breakaway goal.

“At the end of the game, we hung her out to dry a couple of times, so we put her in a tough situation. But for her first game of the year, she stood tall and she was big,” said Murphy. “We were very happy with Sam’s play, and she’s a great teammate.”