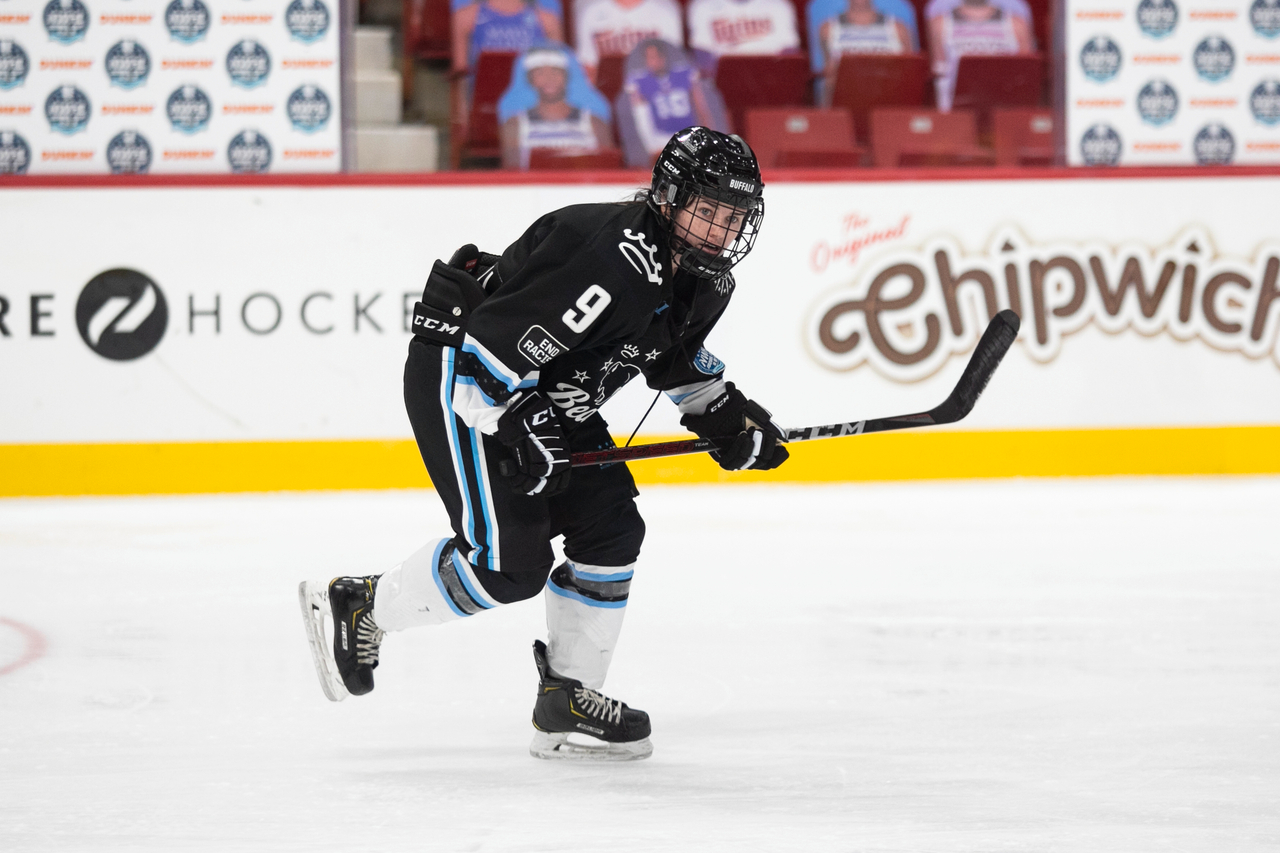 She’s the first player ever drafted into the NWHL from USports, and Autumn MacDougall has already made an impact on the league. As a first-year player, MacDougall is getting to know her teammates and bringing the energy and playmaking ability she brought to the University of Alberta, where she played for five years.

“In the last three years, I really showed who I was as a player,” MacDougall said. “The first two years were more developmental years that I really needed, and the coaches really worked on me and helped me be a 200-foot player. The last three years, I was an offensive threat and really helped my team win some games, so it was definitely fun.”

The Pandas won nationals in MacDougall’s second year, and they finished as West Conference Champions the last two seasons. MacDougall was named a First Team Conference All-Star for the 2017-18 season. She credits her coaches for her success.

“They shaped me into the player I am today, and definitely my linemates too — I played with some really skilled players over the years, so that helped a lot,” MacDougall said. “It’s always an honor being named one of the all-stars, just with the amount of talent in that league.”

When her USports career was over, MacDougall talked to a friend of hers about the NWHL. Mallory Rushton plays for the Metropolitan Riveters, and MacDougall asked her about the league. Rushton advised her to consider it, and MacDougall put her name in the draft. The Beauts chose her on June 17.

“I put my name in the draft and then it happened that I went to Buffalo,” MacDougall said. “I was pretty happy. Being Canadian, it’s close to Canada and convenient. I’d heard great things about the organization and some players who were also going to be on the team.”

There were a couple familiar faces already on the Beauts. Goaltender Carly Jackson and MacDougall were teammates when they were younger playing for Team Nova Scotia, both players’ home province. They faced defenseman Marie-Jo Pelletier, who played for Team New Brunswick. Now MacDougall and Jackson are roommates in Buffalo and teammates with Pelletier.

Before any of the three were able to cross the Canadian border though, they were forced to practice as a smaller group in Canada. Now that they’re together as a full team, MacDougall is getting more familiar with her new teammates.

The Beauts are a young team, and MacDougall is aware of that, but she knows they’re also a fast and energetic team. She’s looking forward to adding to that energy — and winning.

“We just have a lot of really talented players, and I hope we come out as the champions — that’s always the goal,” MacDougall said. “I bring a lot of energy on the ice. I like to see myself as a playmaker — I like to have the puck on my stick and find my linemates when I can, so I’m going to do whatever I can to do that and help my team win.”

MacDougall has done that and then some – after her first five games, she leads the Beauts in goals and is tied with Jordan Juron, Kristen Lewicki and Pelletier with three points. She and the Beauts will see if they can keep their season going tonight in a critical Game 3 against the Boston Pride.

Regardless of the outcome of tonight’s game, the rookie MacDougall has made a name herself already in the NWHL and for the Beauts.

previous
Whale still fighting for No. 2 spot
next
Playoff berth on the line for Buffalo, Boston