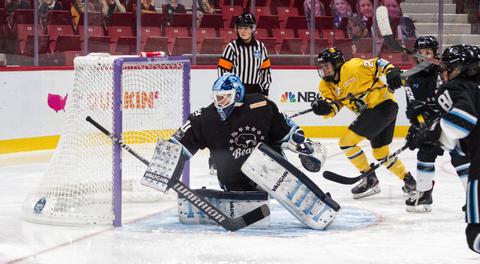 It’s only been one season but Buffalo Beauts backstopper Carly Jackson checks all the boxes.

The Season 6 rookie made an immediate impact both on and off the ice leading all Lake Placid goaltenders in minutes played, shots against, and saves, then earned the NWHL’s Foundation Award for her community contributions.

If that doesn’t say enough, the first-year pro was also voted one of the Fans’ 3 Stars of the Season.

On the eve of the 2021 NWHL Draft, Jackson’s journey is a good example for prospective players about how quickly one can make a difference at the next level.

“Soak it all in and enjoy it,” is her advice to players who will be picked on June 29. “Realize what you’ve accomplished and get ready for the next step. The NWHL is so fun to be a part of and everyone makes us feel like pros. It’s exciting to see where the league is going.”

Just one year ago she was in their position when her name was called third overall by the Beauts. Hockey Hall of Famer Pat Lafontaine, a third overall pick himself in 1983 who later played parts of six NHL seasons in Buffalo, made it official announcing the selection over social media on April 28.

“I was a little star-struck,” she recalls. “It was a dream come true. A special moment as an athlete. It was fun to celebrate with my family and it really felt like I was going to the next level, a true pro with a great opportunity.”

The 2020 NWHL Draft was the league’s first selection process since 2018 and for the first time was intended for players, like Jackson, who had finished their collegiate eligibility. The University of Maine record holder for wins, saves, save percentage, shutouts, and goals-against-average followed Boston’s Sammy Davis and Connecticut’s Kayla Friesen, and went one spot ahead of Riveters defender Saroya Tinker in what can already be considered a noteworthy draft class.

“It was nice having the draft afterward,” she said. “I felt like I could focus on finishing my career at Maine. Then once the draft happened it was go time.”

Jackson signed her first pro contract a few days following her selection. In the fall the Amherst, Nova Scotia native moved to St. Catharines, Ontario not far from the Buffalo border. She lived with fellow rookies Autumn MacDougall and Alyson Matteau, would routinely see head coach Pete Perram, and then in the winter was able to finally meet her new teammates in person.

“Buffalo was home sweet home,” she said. “The organization was so supportive.”

Fast forward to January and the puck drops on a shortened NWHL regular season where Jackson starts all six games for the Beauts including three appearances where she faced 40 or more shots on goal.

“I loved having the responsibility to make a difference and keep our team in games,” she said. “It’s so fun to play games. The situation was similar to my experience in Maine where I played significant minutes right from the beginning. It’s amazing that my teammates trust me and I’m grateful they feel comfortable with me back there.”

Jackson’s season highlight was her first pro victory to open a three-game series against the Boston Pride on January 30. She shares that moment fondly with general manager Nate Oliver who simultaneously earned his first professional win as GM in the process.

“I think as a player and as GM, CJ and I will always have a unique bond,” Oliver says of the victory. “I guess you could say I have her to thank for that too!

“I don’t think that I’ve ever met a player more thankful and more appreciative than CJ. Since the first time we met last season, all I hear her say is, ‘Nate, I’m just so happy to be here!’ or ‘I’m so thankful that I get to play pro hockey!’, or ‘I’m so glad that I get to put a Beauts jersey on!’. And it’s real and it’s sincere. CJ quintessentially embodies the culture we have built within our team and that we strive to continue to foster each day.”

It’s no surprise that Jackson was among Oliver’s first announced signings for the 2021-22 season.

“CJ is just a true blue individual,” he added. “She treats people the way that she would want to be treated. She’s kind to everyone and she makes time for everyone too. I’ve had so many of our players say to me that they feel very comfortable knowing that CJ is the one backstopping them in the net. That feeling is infectious, and the players are not only saying that because of CJ’s tremendous skill set, they’re also recognizing that CJ’s character as a teammate and as a person puts them more at ease too.”

It’s that strength of character that drives Jackson to use her platform to inspire positive change, speaking openly about human rights and in support of the LGBTQ2S+ community.

“It’s important we talk about issues,” Jackson says. “For example, my heart goes out to all Indigenous peoples right now and I encourage other people to educate themselves on the history of residential schools in Canada because it’s very important to know what happened.

“People are so powerful when they can be who they are and tell the truth about themselves. I feel blessed to have a voice and reach a larger audience. I hope what I bring to light can bring us together, it encourages others to speak up, and spreads the message of love and inclusivity.”

The way Jackson strives to grow and improve hockey culture by relating to fans and applying the core values of hockey to her community is the epitome of what the league’s Foundation Award is all about.

“I’m a huge advocate for youth in sport,” Jackson said. “It’s so important for kids to compete and feel safe but also to have fun. Something my parents taught me was to always give back so I try to be active in the community. Winning the award was special. It means a lot that they would consider me.”

Jackson is spending the summer back home continuing to influence the next generation in her summer sport of baseball where she’s running a Little League program for girls aged 9 to 12. She’s also preparing for her Physical Therapy graduate program through Western University and counting down the days until Season 7 when she can see the fans who voted her among their favorites.

“I honestly cannot wait to have our fans back and get the chance to meet them. Having fans is the best part about being a pro athlete,” she said. “I’m pretty psyched for what we have in Buffalo. I love our culture and what we’re building for. We’re all a piece of the Beauts puzzle and here for a reason. Everybody cares so much and it’s so much fun.”