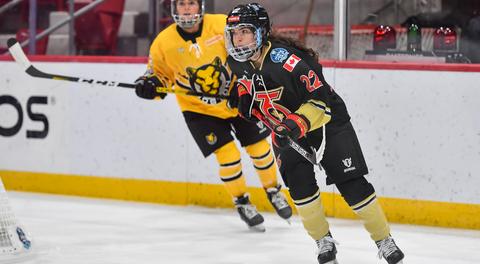 The NWHL returns to action on Friday, March 26th with its’ first of two Isobel Cup Semi-Final games, presented by Discover, beginning at 5 p.m. Boasting the League’s best regular season record, the #1 seeded Toronto Six (4-1-1) will take on the #4 Boston Pride (3-4). The two teams squared off once during the 2020.21 season with the Six netting two goals in the third and outshooting the Pride 38-25 en route to a 2-1 victory.

At the conclusion of the regular season, Toronto’s Mikyla Grant-Mentis led the League in goals (5), game-winning goals (2), and co-led in points per game average (1.5) and points (9) while Boston’s Kaleigh Fratkin co-led the League in points (9) and assists (9). In addition to Fratkin, Christina Putigna (8), McKenna Brand (7) and Jillian Dempsey (6) of the Pride rounded out four of the top five League point-getter positions in 2021.

“We’re just excited to have this opportunity to play again and sort of finish what we started,” said Toronto’s Shiann Darkangelo heading into the Isobel Cup playoffs. “In Lake Placid, we got to play a bunch of games back-to-back, we built momentum as each game went on, we were definitely building and then for it to come to a stop. It was difficult but obviously, we understand the reasons it had to.”

“For me, it was just that we were rocking and rolling,” said Toronto Six Coach Digit Murphy. “We were primed and then, bam, it’s not there anymore but, you know, we’re ready to get that energy and that momentum back, and I’m looking forward to the new party that we’re going to.”

The first seed Toronto Six will take on fourth seed Boston Pride on their home ice in the playoffs at Warrior Ice Arena in Brighton, Massachusetts.

“I think everyone’s excited on our end, for the opportunity to play Toronto,” said Boston Coach Paul Mara. “Obviously they were one of the best teams up in Lake Placid, and we have our hands full with them. They’re a fantastic, well-coached, well-balanced team and I think we’re looking forward to the challenge of playing the number one seed.”

“Now we get to seize the opportunity here and I think we’re all just as excited as we were before,” said Putigna. “We definitely have the same energy we had going in previously, so you know that hasn’t changed, and we’re all really excited to get a second shot at it.”

The puck drops for the Toronto Six vs. Boston Pride game this Friday at 5 p.m. EST on NBCSN. The second Semi-Final between the Minnesota Whitecaps and Connecticut Whale starts at 8:00 p.m. The winners will meet on Saturday, March 27 at 7 p.m. for the Isobel Cup Final. All three games will be televised on NBCSN and streamed on NBCSports.com and the NBC Sports app exclusively in the U.S., and streamed via Twitch in Canada and other international markets.