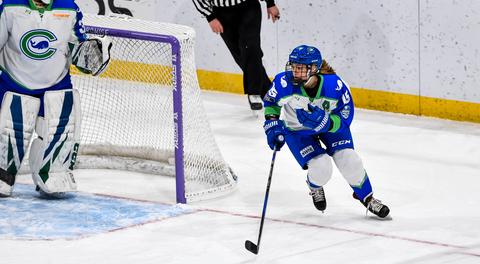 The NWHL returns to action on Friday, March 26th, featuring its’ second of two Isobel Cup Semi-Final games, presented by Discover, at 8:00pm. The #2 seeded Minnesota Whitecaps (3-1) will take on the #3 Connecticut Whale (2-2).

At the conclusion of the regular season, the Whitecaps Nina Rodgers shared the League lead in power-play goals (2) and points per game average (1.5). The Whale’s Alyssa Wohlfeiler tallied 1.3 points per game average (t-3rd in the League) and four assists (t-4th). In the battle of the net, Minnesota’s Amanda Leveille posted the second-most wins (3) and tied for third-best save percentage (.936) in the League while Connecticut’s Abbie Ives collected two wins (3rd in the league), a .936 save percentage (t-3rd) and 2.01 goals against average (4th).

Coach Jack Brodt of the Minnesota Whitecaps told reporters today his team is looking forward to the playoffs and everyone has been working very hard.

“We’ve been practicing regularly for the last two to three weeks,” said Brodt when speaking to media on Tuesday. “’We’ve got a practice tonight at 6:30. We’ve got a practice tomorrow night at 6:30. Players were told to try and keep in shape on their own doing their own individual workouts and so forth. So, we feel relatively confident everybody at this point is pretty healthy and ready to go.”

Minnesota veteran Winny Brodt Brown believes at this point it’s anyone’s cup. It’s going to be a hard, emotional fight, but well worth the wait.

“When I was 17 years old, I never thought that playing on national TV would ever even be a possibility,” said Brodt Brown. “At my age, I was lucky enough to wait it out and have that opportunity.”

All the women involved in this spectacular event appreciate the significance of a national platform. Coach Laura Brennan of The Connecticut Whale was asked if she felt like the game being telecasted on NBCSN was a type of reward for years of hard work.

“For me, it’s just an amazing opportunity to showcase women’s hockey,” said Brennan. “When I came out of college myself there wasn’t a professional league to play in. You could play overseas, the CWHL did exist, but they weren’t letting too many non-Canadian players in and so there wasn’t a viable option for American players to play. So, to see this league grow from season one to now and have this national platform is something that’s truly special and I’m very grateful to be a part of it.”

Shannon Doyle, who is leaving the Whale after this season also expressed gratitude but says it’s now time to get the job done.