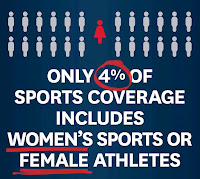 I was working today when a co-worker, who listens to The Hockey Show, reached out to me to ask me a work-related question. While I don’t a blog post on that revelation, we were chatting as we worked through his question to find an answer. He listened to the show last night and asked a pretty poignant question that I probably should answer: why do I interview so many people that are involved with women’s hockey? The graphic to the left likely tells you why I do it, but it doesn’t give the full story behind the motivation that prompted me to become an advocate for the sport (and women’s sports in general). Settle in, folks, because it’s time to peel back a layer of this onion and explain why The Hockey Show is a medium dedicated to women’s sports.

The biggest thing that I can attribute to the show and myself getting into the game both literally as a broadcaster and figuratively as a sports enthusiast was the lack of respect given to women’s hockey when I started working at UMFM. The station had agreed to air four men’s football games and four men’s hockey games over the FM frequency they hold, but the women weren’t included in those agreements. I was puzzled by that, but being new and not wanting to rock the boat I let it slide for Year One of my work around the radio station.

By Year Three, having established The Hockey Show as a mainstay on the UMFM program grid, I felt it was time to show the women the rightful respect that they deserved and for which they fighting. It was heartbreaking to hear them talk about how they worked so hard to make the Bisons hockey team throughout their careers only to play in obscurity for the entire years of their existence at the university.

It was a pretty quick agreement for Bisons Sports, and the women’s hockey program were now part of the broadcasting schedule for UMFM. Step One of breaking the galss ceiling on our radio station was done, and the women would have their day on radio four times per year!

I could have stopped there, but I quickly became the official color commentator to Bisons Sports communication director’s play-by-play offerings as they basically said, “It was your idea, so you look after it.” But given that opportunity, I ran with it. I wanted the broadcasts to be the best we could offer the women based on the technology and creativity we had, so we started doing more such as talking to the players, doing more research into their AAA days, finding out about their lives and school careers, and more. This was about giving the women a platform where they could shine and people could get to know them through our radio voices.

Fast forward through several seasons, some amazing games, one National Championship gold-medal run, a second National Championship appearance, and many struggles, innovations, and advancements throughout the years to enhance the broadcasts, and we’re now sitting at a point where this season – had it gone through – might have been the most interesting from an information standpoint and most appealing from a visual standpoint since we began.

What we have planned will have to wait until next season, but it’s pretty clear that the women’s game has been elevated from second-class coverage at the university to being a priority for both UMFM and myself. Part of that was because we, at the radio station, believe in representing our community through our diversity in both programming and staffing, so having men’s hockey without women’s hockey on the air when women’s hockey is growing by leaps and bounds was, in our minds, wrong.

As we began researching more and more, we realized it was just Bisons women’s hockey that was taking a backseat in some, if not all, U SPORTS cities in western Canada. UMFM opened up the doors to creativity and curiosity at my urging by allowing me to change the way we cover women’s hockey both on The Hockey Show and on Bisons women’s hockey broadcasts. There would be more features, a full pregame show, some fun advertising featuring the players, and a concerted effort to really put the ladies and those that contrinute to their success on a platform where they would be the stars of the show.

Having done all this stuff, you be asking whether or not we’ve seen results, and that’s a valid question.

While I’d love to see more fans at games, I feel like we have been chipping away at the masses when it comes to recognition. We’ve talked to more and more people on The Hockey Show who are doing amazing things for the game of women’s hockey, and we’ve seen an uptick in listeners who tune into the games to hear their daughters play against the Bisons in Winnipeg. We spoke to parents from opposing teams over the last few seasons who love that we have far broader coverage that perhaps what they get from their own school. We’ve heard from schools at those National Championships who believe that what we’re doing for the Bisons women’s hockey program by following them across the map is good for the sport as a whole.

When it comes to the 40% statistic posted above, it’s hard to fathom that mainstream media only dedicates 4% of their media to women’s sports. A lot of that has to do with the commercial advertising dollars that are tied to high-profile men’s sporting events and the money that mainstream media makes off that advertising revenue, but this is why seeing companies such as Scotiabank, Canadian Tire, Secret, and Tim Hortons investing in the PWPHA as sponsors for that effort may start changing things for the better.

I mentioned all that stuff off the top that both UMFM and myself did to elevate the platform for women’s hockey at the Canada West level, and it didn’t come without some resistance. However, it was an investment in both the campus and community in which we live and operate, and Winnipeg and, by proxy, Manitoba’s female hockey scene is growing each and every year with the Bisons being the top level of hockey for women in Manitoba. To ignore that investment would be to ignore our responsibilities to our campus and community, and ignoring one’s community is a good way to find one’s self out of business in a hurry.

To those who have listened to the efforts that Jenna and I put in on the radio show and to the efforts that Kyleigh and I put in on the women’s hockey brodcasts, we are forever grateful for your listenership and cannot thank you enough for your support. For those who may feel that women’s hockey doesn’t offer that which one seeks when it comes to hockey, I implore you to give it a chance. You can’t just cheer for Canada or the US or any other country every four years at the Olympics. These women bust their tails each and every day just like the men do, but only for a tiny fraction of the pay. That’s the next step for women’s hockey, but, for now, they could really use your support to attract sponsors and money to help them take the next steps.

That’s why I do it. And I’m here to watch it grow bigger and better than it was yesterday, last month, last year, or even ten years ago. The future is bright, the sky’s the limit, and I do it because the women absolutely deserve it.

previous
What's the Deal With the NCAA's Transfer Carousel?
next
Fuel slip past Mavericks in home opener shootout