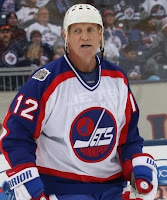 It was brought to my attention today that there was some history set back in 1981 by the man to the left. That’s Doug Smail who was a constant on the Winnipeg Jets roster throughout the 1980s before bouncing through a number of teams and leagues at the end of his career. If there was one thing on which Smail could be counted, it was his lunchpail effort on every shift as a member of the Jets. He was also a mainstay on the Jets’ penalty killing units where that goal-scoring ability would often see him with his arms raised following a shorthanded tally. I found myself asking what happened to Doug Smail, so let’s take a look at this former Jet and some of the stops he made in his amazing hockey career!

It should be noted that Doug Smail wasn’t drafted by the Jets, but was signed as a free agent after going undrafted. It’s hard to think he went unnoticed by NHL teams back in 1980 after skating three seasons for the University of North Dakota Fighting Sioux where he scored 89 goals and 106 assists in 113 NCAA games, but the Jets jumped at the opportunity to sign the winger on the strength of his senior season where he scored 43 goals and 44 assists in just 40 games in helping the Fighting Sioux win the NCAA championship!

Smail played just 30 games in 1980-81, but he scored ten goals and added eight helpers in his NHL debut campaign. It would mark the start of a rather successful run for Smail where he scored ten-or-more goals for the next ten seasons with the Jets. While he would see time in the top-six with players such as Hawerchuk and Steen, Smail would excel on the penalty kill where he was used for his speed and scoring touch.

1984-85 was Smail’s best season in the NHL where he went on a tear as one of those top-six forwards alongside other wingers such as Laurie Boschman, Brian Mullen, and Paul MacLean. Smail scored 31 goals and added 35 assists in that season for the Jets, finishing fourth in goals – one back of both Boschman and Mullen – and sixth in team scoring. The Jets would run into the juggernaut Oilers once again, but it seemed like Smail was on his way to being a household name across the league after topping 30 goals for the first time in his career.

It wasn’t to be, though, as a number of Jets took steps backwards following that season, and Smail followed that trend. He’d hit the 25-goal mark twice more in his career with the Jets, but the consistency to remain among the top-six forwards for the Jets never seemed to return. Smail would eventually be traded on November 7, 1990 to the Minnesota North Stars for Don Barber in a trade that reportedly blindsided the veteran winger.

Smail would play out the remainder of that season with the North Stars before signing a one-year deal in the offseason with the Quebec Nordiques. While he would find the scoresheet ten times in 1991-92 in la belle province, but he’d move one province west with his next deal as he signed a contract with the Ottawa Senators.

Like his time in both Minnesota and Quebec, Smail just couldn’t seem to find that goal-scoring rhythm in Ottawa he once had with the Jets, and he took a new challenge by making the unprecendented move of jumping to the British Hockey League in 1993-94, becoming the first player to go directly from the NHL to the BHL when he joined the Fife Flyers!

Smail showed up with his small-town humbleness that he often was known for in NHL circles, and it endeared him to the fans in Fife quickly as he carried his own equipment and demanded no special treatment whatsoever. The hockey success followed soon after he acclimatized himself, and Fife broke a 20-game winless streak in Edinburgh on a 3-2 victory where Doug Smail scored the game-winner, stating afterwards, “That was a hockey game!”

Smail exploded in Fife as he became a household name for the team with his scoring. Smail tallied 74 goals and 95 assists in 53 games for the Flyers at the age of 35 as he and centerman Mark Morrison found instant chemistry, and Smail’s 13 shorthanded goals that season is a record that still stands in Fife today. He was named the British Ice Hockey Writers Association Player of the Year in 1994, but the Fife Flyers fell in the final to the Cardiff Devils as they just missed out on the ultimate prize in the BHL.

After a couple more seasons where he simply couldn’t find that same rhythm or consistency, Smail hung up the skates for his career. In his NHL days, he scored 210 goals and added 249 assists in 845 games while his BHL career saw him score 108 goals with 123 helpers in 87 career games. Needless to say, that shorthanded goals record he holds in Fife as well as the BHL Player of the Year Award are things to hang his hat on, and he should also be proud that he recorded twelve consecutive NHL seasons in which he scored at least one shorthanded goal, tallying 28 in his career!

So what prompted this walk down memory lane with a former Winnipeg Jets forward? It was posted on social media today that December 20, 1981 was the day that Doug Smail made a little hockey history when he tied the record for the fastest goal to start a game when he beat St. Louis Blues goaltender Paul Skidmore just five seconds into the game! Smail officially tied the record set by Montreal Maroons forward Merlyn Phillips in 1926-27, and that record shared by Smail and Phillips has since been equaled by Bryan Trottier of the New York Islanders in 1983-84 and Alexander Mogilny of the Buffalo Sabres in 1991-92!

In case you were wondering, yes, there are highlights!

Congratulations go out to Doug Smail on this day for his record-tying achievement!