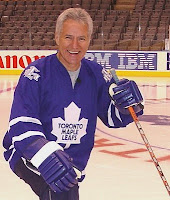 The man to the left needs no introduction as we all know that’s late Alex Trebek. Trebek always seemed to embrace his Canadian roots whenever he had a chance by delving into the hockey world in one form or another. As we saw, he even made a splash at this summer’s draft by announcing Ottawa’s third-overall pick for the club in what was a classy gesture by the club to offer Trebek that opportunity and for Trebek to make the announcement. While he’s been honoured by a number of hockey teams from a number of leagues with jerseys, today I want to focus on this specific Toronto Maple Leafs jersey he was given by the NHL club as it features a unique identifier, but also a strange inconsistency in how that identifier was rendered.

Before we get to the identifier, I need to add the Jeopardy!-style answer to this article. The answer is: “The Toronto Maple Leafs used a three-colour design for their numbers from 2000-2007 on their uniforms, making Alex Trebek’s ‘number’ this.”

Posted at 5pm by the Jeopardy! Twitter account, the photo below shows a one-colour Leafs “number” on the back of Trebek’s jersey. 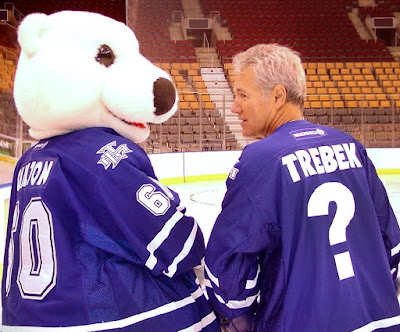 For the life of me, I can’t figure out why the Maple Leafs wouldn’t give Trebek’s “number” the full treatment it deserved when they clearly rendered his name properly in their chosen font. Further to this, Trebek’s jersey has no sleeve numbers either. The three-colour font wouldn’t even be that difficult to rendered for Trebek’s punctuation mark identifier considering that Carlton the Bear next to him has zeroes for numbers.

Perhaps the Maple Leafs’ Stanley Cup curse will be extended after disrespecting one of Canada’s all-time greatest people by not giving him a proper jersey. Or, more appropriately, maybe the Ottawa Senators will win the Stanley Cup first thanks to his ties to that city where they showed the trivia game show host the resepct he deserved!

The question to the answer above is “What is ‘inconsistent’, Alex?” which is something a hockey team should never be when it comes to their uniforms.