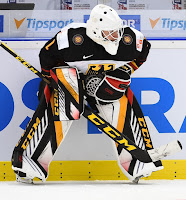 It would appear that at least one nation’s hopes for a World Junior Championship have already been dashed following the news out of Edmonton today. Germany, as per reports, had eight players test positive for coronavirus, essentially derailing any chance of them being a factor in this tournament. Despite the positive tests, Germany says that they’ll remain in Edmonton and see this tournament through to the end. While there are a handful of reasons they may want to do that, imagining that Germany will be in any game outside of one specific game is a prayer. Their tournament is, for better or worse, already over.

We’ll start with the players who didn’t make the trip over to Edmonton from Germany because this team was already missing key components on what was thought to be one of Germany’s most competitive teams in years at this tournament. Chicago Blackhawks prospect Lukas Reichel and 19 year-old Nino Kinder both tested positive for coronavirus during the selection camp process, prompting Germany to send them home.

Reichel is a biog loss for the program after a solid 2019-20 campaign with the DEL’s Eisbären Berlin where he posted 12 goals and 24 points in 42 games, prompting the Blackhawks to select the two-way forward in this year’s draft at 17th overall. It was expected that Reichel could really show off his speed and hands at at tournament against players his own age, so this was major loss for Germany’s forward ranks early in the process.

Nino Kinder, who played with the WHL’s Winnipeg Ice last season, looked solid in his lone major junior campaign where he scored 11 goals and 21 points in 49 games. Kinder was one of the older players on this German squad as a 19 year-old, and he was expected to play a bigger role in Germany’s offence as an older player with North American experience. That won’t happen after he was sent home as well, and a second big offensive piece was removed from the lineup.

Adding to the need for offence and skill was Moritz Seider’s decision not to play this season after it was announced there would be no relegations from the tournament. Seider, a 19 year-old Red Wings defensive prospect who was taken sixth-overall in 2019, is having a great season with the SEL’s Rögle BK where he has two goals and 12 points in 17 contests thus far. Seider captained the German team at last year’s World Junior Championship, and there will be a large hole on the blue line, on the scoresheet, and in the leadership department with Seider opting not to join the team this December.

Complicating matters further, returning netminder and likely starter Tobias Ancicka also tested positive for COVID-19 and was sent home from selection camp. Ancicka played with the Lukko U20 last season in the Finnish SM-Sarja U20 league where Lukko struggled to a 9-18-4-3 record, but Ancicka was a standout in the nets for the club, playing 27 games and posting a .918 save percentage as he kept Lukko in games in which participated. He appeared to have the inside track in being the starting netminder as a 19 year-old on the German squad, but that evaporated with a positive coronavirus test, leaving Germany with Florian Bugl and Arno Tiefensee as options. It seems, based on statistics, that Bugl would be the goalie to choose based on both goalies’ U18 numbers, but we’ll see how these young netminders handle the pressure.

A fourth positive test prior to boarding the plan for Canada came in the form of Elias Lindner, and the forward would also be sent home before he could make the trip over to Canada. As I wrote back on December 9, “[t]he 19 year-old had one goal and nine assists in 17 games for Red Bull this season, but his age and experience put him in good odds to make the team,” and it seems he had with both Reichel and Kinder being excused earlier this month. Lindner would need to step his game to match the contributions of either Reichel or Kinder, but his size and compete level alone would have made Germany more dangerous.

With the news that eight more players on the German team – along with two more Swedish coaches – had tested positive since arriving in Edmonton, the IIHF had no choice but to force the team to remain in quarantine, choosing December 24 as the last day for their quarantine. This also meant that the pre-tournament warm-up games and any practice times that the team had planned were suddenly abandoned, and the Germans will now enter the tournament on December 25 having played no games against other countries and having not practiced as a team since landing in Edmonton.

You’re likely asking why Germany would even want to play following all these setbacks. I know I asked that question, albeit rhetorically, out loud several times as I was writing this article. Between the options of not playing and playing, though, which option would you expect hockey players to choose eleven out of ten times?

It would be a good time to point out that the Ottawa Senators’ third-overall pick this season in Tim Stützle will still be playing, and he’ll be joined by JJ Peterka who looks like he’ll be a thorn in the sides of NHL players soon after being taken 34th-overall by the Buffalo Sabres this year. Peterka can shoot, he never seems to stop skating when on the ice, and he likes to throw checks and go into corners. He’ll need a big tournament to fill some of the gaps, but I like what I’ve seen in highlights from Peterka.

The talent levels for Germany drop sharply after these two players, though, and Germany certainly will need some surprises to compete with the favoured Canadians, Finns, and Swiss in emerging from this pool. Slovakia, on paper, looks like a much better team when compared to the decimated German squad, but playing this tournament out as best they can for this German squad might actually prove beneficial for the future.

Germany is a young team in Edmonton, and a number of players will return for the 2022 World Junior Championship next winter. We know that older teams who have the experience of playing at the highest international levels often do better than younger, inexperienced teams, so this could prove very vital for Germany’s U20 team moving forward. Players like Florian Elias and Markus Schweiger could be legitimate stars next season after figuring out how to play against the bigger, better teams this year, and that bodes well for Germany in the coming years.

In the end, the lack of experience, having no credible starting netminder, the overall lack of size, and the absence of complete line of blue-chip stars will hurt Germany greatly in this tournament. The team needw to realize that positive steps are needed this season thanks to no relegation being incurred by teams, so they should play with a bit of a chip on their shoulders and throw caution to the wind when it comes to taking chances they may normally not take. Seeing how the players react in this situations will give Germany a head-start on next season’s selection camp where, hopefully, they won’t lose key pieces like they did this season.

Unfortunately, the hope fo a medal in this tournament appears to have already be dashed before it started for Germany thansk to some glaring holes in the lineup. The good news is that a number of younger players have a chance to step up and show what they can bring both this year and certainly next year which, in theory, should make Germany a threat to medal next season if everyone shows up like they should.