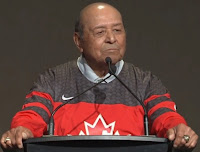 I’m going to be honest: I’m not very happy tonight. Frankly, I hate writing about COVID-19 every second day and the impact it’s having on hockey in this great country. We should be knee-deep in hockey right now, but we’re forced to watch Premiers of provinces do their best at screwing up everyone’s lives because the spines they once had are no longer present. With the news about Fred Sasakamoose today, the Team Canada World Junior team earlier today, and the Vegas Golden Knights’ report about their players, I’m done with inept leadership at the provincial levels as numbers surge across Canada in every province and region.

The loss of Fred Sasakamoose was my breaking point today as the 86 year-old passed away due to complications from COVID-19 earlier this afternoon. Sasakamoose had been admitted to hospital five days ago, and the virus simply did a number on his lungs as his son explained.

Sasakamoose was born on Christmas Day in 1933, and spent horrific years at St. Michael’s Indian Residential School in Duck Lake as part of Canada’s residential school program. Sasakamoose survived that horror, and went on to succeed in spite of what had been done him by playing eleven games in the NHL in 1953-54 with the Chicago Blackhawks as one of the first Indidenous NHL players.

Sasakamoose was an inspiration to Indigenous players that followed, and tributes from players such as Jordin Tootoo, Sheldon Souray, and Bryan Trottier were seen on social media today. But perhaps even greater than the doors he opened in the NHL for others was his work back at his home in Ahtahkakoop Cree Nation where he served as chief and was a member of the Nation’s council for three decades, establishing addiction services and a program to prevent family violence in the community.

Losing one of the first Indigenous athletes and the first Cree athlete to play in the NHL in this way just boils my blood. He is a Saskatchewan Sports Hall of Fame member having been inducted in 2007, and became a member of the Order of Canada in 2018. And he’s gone now because we can’t do things like staying home, wearing masks, avoiding gatherings, and being smart about keeping ourselves safe. We should be ashamed that people rich in life experiences and history like Fred Sasakamoose are paying the price for others’ selfish ways.

This news comes on the heels of Team Canada announcing today that all selection camp activities have been suspended due to two players having positive results and are quarantining at the hotel in Red Deer, the same place that coaches Michael Dyck and Jason Labarbera are quarantining after having contact with someone who tested positive. Should I be surprised that the leaky bubble that Hockey Canada has set up isn’s working? No, but it’s infuriating nonetheless because they had the blueprints on how to make this work from the NHL. This shouldn’t have happened, but it is.

One day earlier, the Vegas Golden Knights revealed they had four players test positive, forcing a shutdown of their facilities over the Thanksgiving holiday in the US. Let’s not forget that American COVID numbers spiked after July 4 and Canada saw its numbers spike sharply following Thanksgiving. Honestly, if government officials can’t see the trends that a mediocre hockey blogger can, why are they running provinces and states? You know that there will be more spikes in the US following this weekend’s festivities, so these four cases are likely just the tip of the iceberg in the US.

Are we really this dumb as a species? We’re losing good people across this nation like Fred Sasakamoose, and we still have people wandering around without masks, gathering in large numbers, defying public health orders, and generally being complete idiots.

I hear people whining and moaning about loss of freedoms and rights with some of the regulations put in place, but I’m tired of it. I know people who have COVID, and it’s far less pleasant than wearing a mask or holding a religious service via web conference. I can tell you right now that Neil Sasakamoose is grieving because COVID-19 took his dad. Thousands of others across this great nation are doing the same, and, if you’re reading this right now, I urge you to really examine what you believe if you think your rights and freedoms are being threatened by a piece of cloth and elastics or by staying home for the next couple of weeks.

The things we lose by not following simple rules are far greater than any personal right or freedom that may be temporarily affected by selfish, ignorant beliefs. I’m tired of the whining about how you’re so hard done by when people are burying loved ones because of this virus. And I won’t stand for it any longer.

We’re better than this, Canada. Let’s get it together for each and every person in this country. We come together so loudly and so proudly when we see the Team Canada logo on our favorite hockey players just like Fred Sasakamoose above. We owe it to him, to those who are no longer with us, to those currently battling the virus, and to the men and women providing the healthcare and treatments needed for those who are battling to not give up in those fights. We owe it to each other to be good to one another, to care for one another, to look out for one another for which Canadians around the world are known. We can and should be better.

I hope you’ll be part of this Canadian family and do your part by wearing a mask, staying home, and avoiding gatherings while falling under public health orders. The things we’ve lost can’t be replaced, and I’m hopeful we won’t lose much more if we all follow the rules.

Rest in peace, Mr. Sasakamoose. Your legacy won’t be forgotten as you rejoin your spiritual ancestors across the sky to watch over this great nation.

Until next time, raise your sticks high in honour of Fred Sasakamoose!