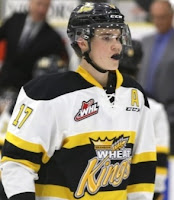 The young man to the left proudly wearing the Brandon Wheat Kings colours while being an alternate captain for the team is Ridly Greig. The Ottawa Senators prospect is supposed to be in Red Deer, Alberta right now as part of the Team Canada World Junior Championship selection camp, buthe’s been forced to quarantine at home after he tested positive for coronavirus back on November 8. Playing by the 14-day quarantine rules, Ridly will be eligible to join the camp on Sunday, and I’m sure it will be a welcome sight for both him and Team Canada to have him back at the rink. My thoughts are with him and his family, including sister and former Lethbridge Pronghorns sniper Kyra Greig, as he works through this unfortunate situation.

Greig’s positive test result should put the IIHF on high alert, though, when it comes to this year’s World Junior Championship. While they have already stated that the tournament would be played in a bubble in Edmonton similar to what the NHL did, there are considerably more factors that the IIHF needs to address prior to this tournament starting, let alone playing out to a finish.

As you likely know, there have been coronavirus outbreaks in the KHL where both Russian and Finnish World Junior players are currently playing, and one has to hope that they’ll be quarantined and kept away from their KHL teams in the next week or so if they hope to participate in those national selection camps. The last thing that the Russian and Finnish national teams need are an outbreak in their camps, shutting those camps down. If I were the IIHF, I’d be instructing players who wish to play to leave their teams now, especially if any of those players are on a team where teammates had tested positive.

In addition to these situations, Austria is in a lockdown until December 6 where all leisure facailities, including rinks, have been closed due to the number of cases seen in that country, and a curfew currently is being enforced from 8pm until 6am daily. Germany set a new daily record for COVID-19 infections today, and that country has already named its roster as it prepares to travel to Canada. The US is still struggling with its control on COVID-19 as well, and they’ll be heading north to Canada as well. In other words, there’s a greater chance of infection now, thanks to the current state of the world, than there was when the NHL bubbles started, and that has to worry the IIHF.

If the IIHF was going to play this safe, I would be looking at a three-week isolation period from December 5 until the start of the tournament on December 26. That means three weeks of isolation at the hotels where the teams are staying with no exceptions – team members must be behind hotel doors by 12:01am on December 5 or they are denied participation. With the way the cases are spiking around the world, this incorporates the two-week incubation periods with the two-week quarantine requirements with an extra week of preparation and on-ice practice in the event a player or staff member tests positive at the start of the bubble period.

I realize that this long isolation from friends and families may wear on these kids. Heck, the NHL players who were isolated didn’t entirely enjoy it, and now we’re asking teenagers to do the same thing. I can only see more complaints about this month of go-nowhere and do-nothing, so the IIHF would be wise to learn from the NHL’s mistakes and provide some real opportunities for fun. Turn a hotel meeting room into a giant arcade. Set up table hockey games in another meeting room. Encourage video game enthusiasts to bring their consoles. Get great food options for the players.

Personally, this tournament seems like a bad idea based on the teams who are supposed to be attending and the timeline we’re on with resepct to the COVID-19 situation in Canada. I understand the IIHF is likely going to go ahead with the event regardless, but I have to admit that this will be one of the weirdest tournaments in history without the bluster of the amazing Canadian fans when the red-and-white take the ice.

I guess if there’s one shred of fortunate luck, it’s that we’re in a pool with Finland and Switzerland as two of the “Big Six” nations at the World Junior Championship, meaning that the New Year’s Eve game against one of Canada’s longtime arch-enemies in the US or Russia won’t be on the schedule this year at least until the crossover in the medal round. While I still fear Finland for what they can do on the ice, Canada just doesn’t have the same hatred for the Finns as, say, the Americans or Russians. Heck, the Finns are liked more than the Swedes too. I guess if the tournament is going to feel off for rivalries, not having fans there may not matter as much as I’m thinking it will.

As stated above, though, there are a ton of challenges the IIHF still has to face before this tournament kicks off in a month’s time, and they should be tackling those issues now if they haven’t already. My hope is that the second Edmonton bubble is as successful for hockey as the first was, and that will require some concessions made by everyone in getting that to happen.

Let’s hope that’s happening as you read this if we want a Christmas hockey tournament in 2020.