The Hockey Show, Canada’s only campus-produced radio show that strictly talks hockey, is back for another weekly installment of puck chatter! As you know, these last few months have featured all sorts of great guests and interesting people, and tonight’s no different. We rarely get to talk to other Canada West coaches – are we scary? Intimidating? – about their programs, but tonight will feature a coach from one of those non-Manitoba teams with whom we’ve been wanting to speak for some time! He has the details on a situation we’ve been keeping tabs on, so hopefully this interview will provide some hope for a couple of Canada West teams! 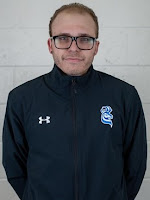 With Jenna having to work tonight, Teebz goes one-on-one with former Lethbridge Pronghorns women’s hockey assistant coach and current Coaldale Copperheads assistant coach Josh Elliott! Josh carved out a pretty interesting career as a player in and around the southern Alberta city of Lethbridge before stepping behind the bench. We’ll learn about how he grew up in Coaldale, Alberta before joining the HJHL’s Coaldale Copperheads where he played four seasons and earned some accolades. From there, we find out how he transitioned into coaching, some of the various roles he’s had while coaching, how he ended up behind the bench of a U SPORTS women’s hockey program, the cancellation of the Pronghorns, the potential revival of the Pronghorns, and how Josh is proving that one can go home again by joining the Copperheads as an assistant coach! It’s a great chat with a guy who is plugged into the local hockey scene in and around Lethbridge, so, if you want updates on what’s happening with the Pronghorns from a coach’s perspective, make sure you tune in tonight at 5:30pm CT tonight to hear all of this on one of 101.5 FM, Channel 718 on MTS TV, or on UMFM.com!

Where’s the best place can you hear tonight’s show if you’re outside Winnipeg or not near a radio, you ask? The new UMFM website‘s online streaming player is pretty awesome if you want to listen online. If you’re using an Apple device, the player doesn’t seem to like Safari yet, but we highly recommend you use the TuneIn app found on the App Store or perhaps another browser. If you do use the TuneIn app, you won’t be disappointed. It’s a solid app.

If you have questions, you can email all show queries and comments to hockeyshow@umfm.com! Tweet me anytime with questions you may have by hitting me up at @TeebzHBIC on Twitter! I’m here to listen to you, so make your voice heard!

Tonight, Teebz sits down with former Pronghorns women’s hockey assistant coach Josh Elliott as we learn about his career, his move to coaching, his roles while coaching, his experience to being a university women’s hockey team coach, going home to coach the team he played for, and much more exclusively on 101.5 UMFM and on the UMFM.com web stream!