I’ve never understood why Storm Troopers could never blast the heroes in Star Wars. I know that would technically ruin the movie had they blasted Han Solo or Luke Skywalker long before the battle on Endor, but why is it that an army of armoured soldiers couldn’t hit water if they fell out of a boat in the middle of a lake? One has to hope that this trait doesn’t follow the Dallas Stars who seemingly took their Reverse Retro inspiration from the Empire’s army as the Stars showed off their newest uniform today.

I didn’t like these uniforms when I reviewed all 31 Reverse Retro jerseys, and I hate them more today. The whole point of hem stripes and sleeve stripes is to break up the uniform’s main colour with a little contrast while the pants were always a contrasting colour to the jerseys and socks that players wore in order to help break up the monochromatic look. With the Stars employing the Storm Trooper look, let’s tear this new uniform to shreds once again. 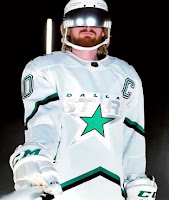 There is so much white on this uniform that the silver of the star in the logo fades in this bright light. I’ve always been of the mindset that the logo should be front and center in terms of the team you’re representing, but it kind of gets swallowed by all the white here. The stripes and the font are nothing more than after thoughts, and triple-colouring your font with the overpowering main jersey colour actually makes the third outlined colour useless. Just go with a block font to make this work better! I want to be more supportive of the Stars since they look so good in Victory Green, but this entire Reverse Retro exercise for Dallas is a big zero with this overkill of white. 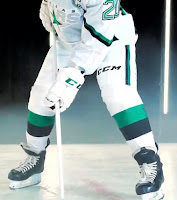 The socks finally bring some contrast to the overwhelming whiteness of this uniform, but it feels like an afterthought considering what could have been done had the Stars used green pants. The white gloves leading into white sleeves and the white jersey leading into white pants is legitimately not a good hockey look when one considers they play on white ice. Hockey players are not James Bond, so these white uniforms really need a splash of colour to build that contrast. Unless, of course, maybe the Stars believe they can camouflage themselves into the ice and boards surrounding the ice surface? Until they remove the board advertising, though, this seems like a poorly thought-out plan. 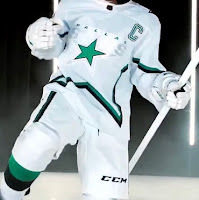 Stop the fist pumps and the celebration. Yes, they go on sale tomorrow, but I honestly can’t see these being in the top-ten of Reverse Retro jerseys in any year when the Stars already wear their gorgeous green jerseys. I own a Mooterus jersey, and I would wear that over these any day of the week and twice on Sundays because it already had a splash of colour and some contrast in the jersey. This is legitimately an equipment manager’s nightmare and a hockey fan’s disappointment when it comes to colourful, fun jerseys worn by NHL teams. At no point should this jersey be an option to wear in an opponent’s rink due to that disappointment, and I hope Dallas goes oh-fer in these jerseys for the entire time they have them in their wardrobes.

While a few people mentioned to me that they look like the uniforms worn by Bob and Doug McKenzie in Strange Brew during the hockey scene, the difference is that Bob and Doug knew they were parodying Star Wars in their uniforms.

The Dallas Stars aren’t doing a parody, though, and that’s where this uniform falls flat on its design. It’s not meant to be a joke, but it is simply because there are simple design elements that are needed to make it look like a hockey jersey – one of which is the use of colour. This is an epic failure from a team whose redesign in 2013-14 brought back the swagger of the Stars, and I can’t figure out why they keep shooting themselves in the collective foot with these horrific designs.

Until next time, may the Force be with you!