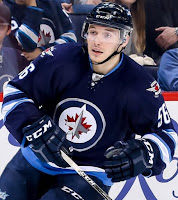 There was some excitement when the Winnipeg Jets announced that they had signed free agent Marko Dano this offseason as Dano has always seemed to show flashes of brilliance. The other side of that coin, though, is that he hasn’t been able to string together enough consistent flashes of brilliance to bump a player from a roster spot with an NHL club despite being 26 years-old. Some of that is due to this lack of consistency, but some of it has also been due to untimely injuries that Dano has suffered. While he was excited to try to kick-start his career with the Jets for a second time, it seems those plans might be on hold once again thanks to some news out of Slovakia.

According to SlovakNHL.sk’s Jozef Struhár in an article one week ago, Dano suffered what appears to be a broken wrist that required a second surgery to insert a screw to strengthen the wrist and help speed up his recovery in anticipation for a January 1 NHL start. It would seem that his season in Slovakia is over for the time being, and he may not see the ice again until NHL training camps open here in North America.

For a kid who has played 38 NHL games in one season as a career-high, he’s likely looking at a start in the AHL with the Manitoba Moose for the 2020-21 season if and whenever it starts. With the AHL weighing options on how they want to run their season, there’s no guarantee that the AHL will even play a season if the Canadian border is closed considering that there are just three other Canadian AHL teams – Toronto, Belleville, and Laval – and the rest of Manitoba’s Central Division opponents all play south of the border. Needless to say, there are a lot of things that need to fall into place for the AHL to play a campaign as it currently stands.

That leaves Dano on the outside looking in once again when it comes to the Jets’ roster. He likely won’t supplant a Mason Appleton or a Jansen Harkins at this point, and he doesn’t have the trust that Maurice places in veterans like Nate Thompson or Mathieu Perreault. He’ll be forced to compete with Dominic Toninato and CJ Seuss for one of those pressbox spots, and it’s not where a player like Marko Dano should be if the Jets truly believe he can take steps forward.

Assuming his wrist heals as it should, Marko Dano will likely resume his North American career with the last Canadian professional team he played with in the Manitoba Moose. It makes more sense for Dano to start there, get his legs and hands up to speed once again, and then try to push for a roster spot with the Jets.

Dano’s a good player who can be a serviceable, if not useful, NHL player at some point, but he’s been plagued by unfortunate injuries which have contributed to the inconsistency we’ve seen in his game. Let’s hope that his second stint with the Jets results in seeing #56 in the Jets lineup playing a bigger role more often than we did before.