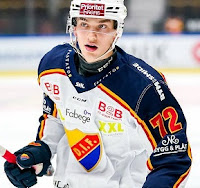 If the IIHF had been listening to suggestions I made back on November 20, all the countries participating in the 2021 World Junior Championship would have already arrived in Edmonton by today for three weeks of quarantining and practicing. Instead, no one has assembled in the Alberta capital, and news broke today that Sweden will be without one of their best players whenever they decide to visit Canada as COVID-19 has now impacted that team in a big way. The challenges for the IIHF regarding Sweden’s case were always there, and they seemingly were playing the odds that everyone was taking precautions. It’s painfully clear, though, that bringing players and staff in from other countries who are trying to isolate might be the worst decision in hockey.

William Eklund, seen above with Djurgarden, appeared to be one of the players to watch at this year’s tournament, but the 18 year-old tested positive for coronavirus at the Swedish selection camp and was sent home from the camp with just 21 days before the tournament. Eklund looked like a strong candidate to play for his country prior to his positive test after scoring seven goals and five assists with Djurgarden in the SHL.

Some may be questioning why Sweden sent him home when he could just quarantine for fourteen days, but, according to Uffe Bodin, players have to have three negative tests before traveling to Edmonton for the tournament. I’m not certain if that is an IIHF rule or a Government of Canada mandate for playing in this tournament, but it’s pretty clear that Eklund wouldn’t have shown the three negative tests needed to be able to travel and he certainly can’t practice with the other members of Team Sweden. As a result, Sweden sent him home.

You may be asking about Team Canada at this point as they’re finishing up a self-imposed quarantine process, and the belief is that Canada caught their infections early enough so that players can still produce the required negative tests to participate. Because Canada is the host, the three-test requirment may not be required, but it would be reassuring to know that the players wearing the red-and-white are COVID-free when the tournament starts on December 26.

Losing a player projected to be drafted in the early part of the first-round of the NHL Entry Draft is nearly impossible to replace for any team, but Sweden will look to continue its round-robin unbeaten streak while looking for a medal without Eklund following this development. It became harder without them, but adversity can bring out the best in a team if manged well. One just has to hope there are no further positive tests at the Swedish camp that will test the team’s depth even more.

We’ve already seen Team Canada shut down its camp for two weeks following positive tests among players and coaches, and it remains to be seen how that might affect their play once the tournament starts. The belief is that it will have no effect with these players already being among the best on the planet for their age group, but chemistry is a tough thing to foster when players are confined to their hotel rooms in Red Deer.

Of course, had the IIHF encouraged teams to finalize their rosters earlier and assemble in Edmonton by today, William Eklund may have avoided contracting the virus. And assuming that they were doing the required testing earlier, there may have been a chance for Eklund to have quarantined so he could join the team prior to the start of the tournament. As Edna Mode said in Disney/Pixar’s The Incredibles, “Luck favours the prepared, darling.”

Let this be a lesson for the tournaments that the IIHF is hoping to hold in 2021: early preparedness and proper planning will mean a better tournament as more of the high-profile players will be able to participate. Losing Eklund is a blow to the tournament with the loss of a potential star player, a blow to Team Sweden’s ability to ice their best team possible, and a blow in his ability to showcase his talents as he looks for an NHL career. None of that is good when hockey fans are craving an opportunity to watch the best hockey during this prolonged lockdown. With no Lafreniere for Canada, Kakko for Finland, or Hughes for the Americans, it’s just another blow to a tournament leaking star power.

This was not the news Team Sweden nor the IIHF wanted for the 2021 World Junior Championship. The reality of not preparing early for this tournament is now setting in for both organizations.

previous
Hockey Blog In Canada: Three More Opt Out
next
A Curious Case Of McNames