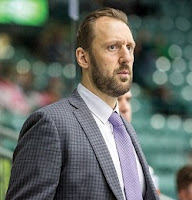 One day after writing about how it would be good to have all of the teams participating in the 2021 IIHF World Junior Championship arrive early in Edmonton to quarantine, Hockey Canada makes an announcement tonight that should really tip the scales in the direction of early quarantining as they have isolated two assistant coaches, Michael Dyck and, pictured to the left, Jason Labarbera, after they came in close contact with someone who had tested positive. I feel like I am beating a dead horse every time I write about this, but I cannot stress how important this quarantine period is with respect to all the players and staff who will arrive in Edmonton. If the IIHF isn’t going to mandate this, teams should.

I’m not going to blame eiter of Dyck or Labarbera for being safe and isolating after close contact, but having two assistant coaches isolate in the middle of selection camp for fourteen days means that they’ll only get to watch video regarding player evaluation and cuts that have to be made. There likely will still be interactions between the coaches via video chats and phone calls, but coaches usually like to be at the ground level when observing players because what they do off the ice is just as important as what they do on it.

It should be noted that Michael Dyck is the head coach for the WHL’s Vancouver Giants as well as serving as Canada’s National Men’s Summer Under-18 Team head coach. Dyck spent time in the WHL with Calgary, Brandon, and Regina, and also played two seasons on the blue line for the Lethbridge Pronghorns men’s hockey team. The 52 year-old is an excellent communicator with younger players, and helped the Vancouver Giants advance to the WHL Final in only his second season at the helm.

Jason Labarbera’s NHL career saw him suit up as a goaltender for the New York Rangers, Los Angeles Kings, Vancouver Canucks, Phoenix Coyotes, Edmonton Oilers, Chicago Blackhawks, and Anaheim Ducks in his career, but he now works as the goaltending coach for the WHL’s Calgary Hitmen and for Hockey Canada. Labarbera knows about the pressures that come along with playing at a high level, and is a good evaluator of goaltending at the Under-20 age level.

With five goalies in camp this season and no returnees from last year’s squad, having both Dyck and Labarbera down at ice level would be more beneficial than having them isolated in their room. Unfortunately, that’s not going to happen for the next two weeks for Team Canada, so we’ll have to hope that both men know enough about the players in practice and from what they see on game video to make good choices for this team so they can defend the gold medal won last year.

Once more, I cannot stress that the IIHF should be encouraging teams from around the globe to arrive early in Edmonton and begin adjusting to bubble life because any contact tracing that leads back to players or coaches could be devastating for teams. This is a two-week tournament, not a full hockey season, so having to quaratine players or coaches for fourteen days would mean the tournament is virtually over for those people. That’s not how you want to remember a World Junior Championship.

My thoughts are with both Michael Dyck and Jason Labarbera as they go through the necessary process to ensure no further positive contacts or cases. I’m hopeful both will show negative test results and we’re simply erring on the side of caution. It would be entirely wise of the IIHF to urge other international teams to err on that side of caution as well by getting their players and staff to Edmonton sooner rather than later so they’re ready to play hockey when the 2021 IIHF World Junior Championship opens on December 26.