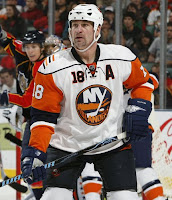 According to my social media feeds today, it’s National Jersey Day! The hockey jersey, or sweater as the traditionalists will say, has played a large role in Canada’s history as Roch Carriere’s story, Le Chandail de Hockey, has seen success in both French and English as well as being set to music and played by philharmonics and orchestras across Canada. We anxious await the releases of new jerseys as much as we anticipate the craziness of NHL Free Agency Day, and wearing one’s favorite team’s logo on one’s chest just seems to make one walk taller, prouder and more confident to be “part of the team”. The man pictured is from Regina, Saskatchewan so I don’t know if he took part in today’s fun, but he has himself a heckuva closet of jerseys.

As it stands, there are eight players who have played for ten or more NHL teams in their illustrious careers. We’ll start with the only active player in the NHL holding that distinction, and that goes to oft-traded-on-trade-deadline-day Lee Stempniak! As it stands, Stempniak has played for the St. Louis Blues, the Toronto Maple Leafs, the Phoenix Coyotes, the Calgary Flames, the Pittsburgh Penguins, the New York Rangers, the Winnipeg Jets, the New Jersey Devils, the Carolina Hurricanes, and the Boston Bruins! Of his 911 NHL games, the most came with St. Louis where he skated in 233 games as opposed to the Winnipeg Jets where he appeared the least, dressing in just 18 games. Stempniak finished his 2018-19 season with the Boston Bruins, so we’ll have to see what his next move is.

Another player with ten teams on his resume is Stanley Cup champion Mathieu Schneider! Schneider won a Stanley Cup in 1993 with the Montreal Canadiens, but he’s also appeared with the New York Islanders, the Toronto Maple Leafs, the New York Rangers, the Los Angeles Kings, the Detroit Red Wings, the Anaheim Ducks, the Atlanta Thrashers, the Vancouver Canucks, and the Phoenix Coyotes. Schneider spent most of his 1189 games in a Canadiens sweater, logging 383 games in La Belle Province, while he spent just eight games wearing the colours of the Phoenix Coyotes!

e
Jim Dowd is another player who seemingly always had his bags packed as he appeared in NHL games for ten teams. Dowd suited up with the New Jersey Devils, the Vancouver Canucks, the New York Islanders, the Calgary Flames, the Edmonton Oilers, the Minnesota Wild, the Montreal Canadiens, the Chicago Blackhawks, the Colorado Avalanche, and the Philadelphia Flyers! Dowd played the least games of the eight players listed, appearing in just 728 games, but he spent the most time with Minnesota where he played 283 games and the least time with the New York Islanders where he played just three games!

Dominic Moore also suited for ten NHL teams in his career which I found hard to believe as I had completely forgotten he had stints with some of these franchises. Moore played for the New York Rangers, the Pittsburgh Penguins, the Minnesota Wild, the Toronto Maple Leafs, the Buffalo Sabres, the Florida Panthers, the Montreal Canadiens, the Tampa Bay Lightning, the San Jose Sharks, and the Boston Bruins. He actually played for both the Rangers and Maple Leafs twice in his career, but his 322 gams with the Rangers were the most of his 897 NHL games while he spent just 18 games with the Buffalo Sabres!

Olli Jokinen makes an appearance on this list thanks to the ten teams he played with in his career! Jokinen wore the jerseys for the Los Angeles Kings, the New York Islanders, the Florida Panthers, the Phoenix Coyotes, the Calgary Flames, the New York Rangers, the Winnipeg Jets, the Nashville Predators, the Toronto Maple Leafs, and the St. Louis Blues! Of the eight players listed here, Jokinen played the second-most games, but recorded the most points! 567 of his 1231 career games were spent with the Panthers while playing just six games at the end of his career for the Toronto Maple Leafs!

JJ Daigneault is another one of those players who I had forgotten played for so many teams. Like Schneider, he won a Stanley Cup with that 1993 Montreal Canadiens team, but also suited up with the Vancouver Canucks, the Philadelphia Flyers, the St. Louis Blues, the Pittsburgh Penguins, the Anaheim Mighty Ducks, the New York Islanders, the Nashville Predators, the Phoenix Coyotes, and the Minnesota Wild. The reliable defenceman played 899 career games, spending 352 of those with Montreal and just one single game with the Wild.

I knew Michel Petit was one of those guys who got moved a lot in the 1980s just because he seemingly was on every team – ten of them, in fact. That being said, Petit played with the Vancouver Canucks, the New York Rangers, the Quebec Nordiques, the Toronto Maple Leafs, the Calgary Flames, the Los Angeles Kings, the Tampa Bay Lightning, the Edmonton Oilers, the Phoenix Coyotes, and the Philadelphia Flyers. The Toronto-Calgary segment of his career was the infamous Doug Gilmour trade to the Leafs that saw Petit go to the Flames as part of the package. In his 827 NHL games, Petit played 226 of those contests with the Canucks while he had just 18 games as an Oiler. Not bad for a guy who finished his career with 1839 PIMs!

The final guy on this list holds the record for the most teams played for in NHL history, and that’s the guy at the top – Mr. Mike Sillinger! Mike played with twelve NHL teams in his career, and those teams include the Detroit Red Wings, the Anaheim Mighty Ducks, the Vancouver Canucks, the Philadelphia Flyers, the Tampa Bay Lightning, the Florida Panthers, the Ottawa Senators, the Columbus Blue Jackets, the Phoenix Coyotes, the St. Louis Blues, the Nashville Predators, and the New York Islanders. Of his 1049 NHL games, he spent the most with Columbus where he dressed for 155 games, 14 more than the Islanders with whom he retired. The team where he spent the least amount of time was the Ottawa Senators, suiting up for just 13 contests in the nation’s capital!

These players played for a combined 30 NHL franchises – 28 if you combine Quebec-Colorado and Atlanta-Winnipeg – with the Phoenix Coyotes employing six of the eight players at some points in their careers. The Rangers, Islanders, Leafs, and Canucks all had five of these players on their rosters, and the Flyer, Blues, Flames, and Canadiens all had four of these eight players.

There could have been more teams added to these lists too. Mathieu Schneider was claimed by the Columbus Blue Jackets in their expansion draft, but he wasn’t signed by the team. Dominic Moore was traded by the New York Rangers to the Nashville Predators for Adam Hall, but Nashville traded him the same day to the Pittsburgh Penguins for a third-round pick. Mike Sillinger could have had a Dallas jersey to his name after he was traded by Columbus to Dallas for Darryl Sydor, but Dallas swapped him on the same day to the Phoenix Coyotes for Teppo Numminen.

There are only four current teams that don’t appear on these lists, and two of those are Vegas and Seattle. The other two are Dallas and Washington who never had at least one of these players on their rosters. Likewise, there are two franchises who no longer exist who employed at least one of these players, and those franchises are Quebec and Atlanta.

So there are some cool facts about the NHL players who wore the most jerseys in their careers, and the teams that carried these eight players on their rosters. I’m sure I could break down a hundred more interesting facts about these players and the jerseys they wore, but I think we’ve covered enough for tonight!

previous
Hockey Blog In Canada: The Empire Strikes Back
next
Shocking Allegations in CHL Lawsuit Detail Sexual Abuse and 'A Deviant Culture'