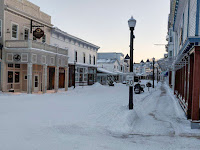 In the season in which no one can catch a break, it’s becoming very apparent that few, if any, outdoor rinks will be installed this year at community centers and places of public gathering. If there’s one thing that brings some normalcy to cold-weather locales, strapping the skates on and feeling the crisp winter air on your face at the outdoor rink is that norm. The unfortunate part is that Code Red mandates in cities across Canada have forced normal winter activities such as skating and toboganning into taking a season off as well, and that’s only going to add to the stir-craziness we’re seeing in Canadians.

I am encouraged, however, by the number of people I’ve seen and heard building backyard rinks for their own enjoyment. This activity used to be a rite of passage every winter out on farms and in small towns where a lot of the NHL legends got their start, and this winter’s lack of public rinks has made private rinks that much more important for people who want to skate outdoors.

HBIC Headquarters sits upon a postage stamp of land, so I don’t have a rink. I’d love to build one, but I simply don’t have the space to do it. I find myself a little envious of those that do have the space and install either a skating rink, a curling rink, or a combination of the two because the rink represents a way to break the monotony of a cold, dreary winter.

CBC had a great piece last year on February 12 about all the homemade rinks in Manitoba with an assortment of pictures, and I have to say I have a little FOMO going on because I do fear I’m missing out. There’s a skill to building a good rink, and it’s pretty clear that a lot of Manitobans are bringing back a skill that may have been lost to time thanks to the public skating options available in cities. Rather than waiting for someone to flood the rink, Manitobans are flooding their very own rinks in waves!

Perhaps what is most unique about some of Winnipeg’s rinks is that they cross property lines as families and neighbours come together to build impressive rinks in neighbourhoods. One such rink is in the Crescentwood area, seen below, and it spans the front yards of three houses! This was the brainchild of Shane and Kara McCartney (paywalled link – sorry!), one of the three homeowners, as their son, Blake, had his hockey season ruined by the pandemic. Rather than pout, Blake is now skating on his front lawn thanks to the efforts of these Winnipeggers! 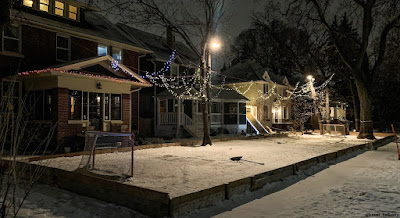 The start of this article sounded a little depressing as some winters can seemingly be, but it’s pretty clear that people across this land are rediscovering ways to build their own rinks just as Walter Gretzky did for Wayne, just as Rob Konecny did for Travis, and just as former NHLer Dave Gagner did for his son, Sam, and his friends, John Tavares, Cody Goloubef, Akim Aliu, Brendan Smith, and Reilly Smith. Will we see an uptick in skilled hockey players coming from outdoor rinks to NHL arenas? The likelihood seems good, but time will tell on whether these backyard rinks result in NHL contracts.

What shouldn’t be forgotten, though, is that every backyard rink creates an entire wealth of memories, whether it be building a rink with a father, skating with friends, or competing against siblings to go with the emotions that come along with each of these moments. I’ve talked a lot about keeping distances for safety during the pandemic on this blog, but a backyard rink brings people closer together. It doesn’t mean that they’re physically standing closer to one another, but rather the memories of the effort and remembering the good times brings that closeness that we’re so desperately needing in these socially-distant times.

With it appearing that outdoor public rinks might be few and far between for a lot of Canadian cities this year, this might be the best time to rediscover a talent that so many people just stopped using thanks to the local public rink. Flooding a rink in the silence of a still winter night is something that I’ve heard is quite cathartic for the mind – it’s just you and the night watching the new layer of water freeze to the ice surface. A backyard rink might not only be the remedy for winter blues for those stuck indoors, but it could be a therapeutic way for parents to spend some time alone without all the daily pressures.

I’d love to see a backyard rink webcam option from someone. Watching a game of shinny is just as good, if not better in my opinion, than an organzied game of hockey simply due to the creative nature of players playing without strict rules. If you have a webcam set up on your backyard rink, post the link for that cam below. I think it would be an awesome venture for a lot of us who are craving hockey right now.

For everyone who has built or is building a backyard rink, I salute you. You’re keeping the pond hockey dreams alive with your efforts, and I am in awe of your talents when it comes to having a clean sheet of ice!