I will fully admit right here on this blog that I’ve seen some rather strange things done at hockey games. From the act of pouring beer on someone to fights in the stands over team loyalty, I’d like to say that nothing really surprises me anymore. However, I often find myself questioning humanity all over again with some of the news reports that I read, and today’s news report is a doozy if there was ever a story to make question one’s sanity.

According to Alfonzo Galvan’s story in the Sioux Falls Argus Leader two days ago, a 24 year-old man from West Fargo, North Dakota named Peter James Davies Mark decided to become the new equipment manager for the USHL’s Sioux Falls Stampede midway through their game with the Fargo Force as he made his way to the Stampede’s dressing room and proceeded to remove and hand out Stampede jerseys to other fans in the stands. It should be noted that the Stampede have no affiliation with Mr. Mark, and his clearance to enter the dressing room area was none.

“[Fargo Police Spokesman Sam] Clemens said Mark was reported to security after someone saw him handing out jerseys to people in the crowd. Upon reviewing security cameras, it was revealed that Mark made several trips into the Stampede locker room and stole different items.

“Nine jerseys, a helmet and a coat belonging to a Stampede player were stolen from the locker room, according to Clemens. The items were handed out to Mark’s friends and other people in the crowd every time he came back from a trip to the locker room. The items taken were valued at $1,500.”

What would possess Mr. Mark to do this? There was no information given to reporters about motive, but I would guess that there may have been some alcohol and a dare or two involved in this caper. It’s pretty clear, though, that this was a bad idea as Peter James Davies Mark was not only identified, but apprehended in his scheme to swindle the Stampede. 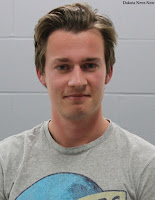 Thanks to Dakota News Now, the mug shot of our sticky-fingered friend was posted on their website. The man to the right is Peter James Davies Mark, and he was charged with grand theft over $1,000 for his little stunt. Police are unsure how Mark got down to the Stampede’s dressing room area at The Denny Sanford Premier Center during Saturday night’s game between the Stampede and the Force, and all of the nine jerseys, helmet, and coat he took from the dressing room were recovered. There was no word on whether Mark would plead guilty to the charges, but with video of him going in and out of the room and the recovered items he stole I’d say this is an airtight case against Mark.

I don’t know if Mr. Mark’s little act of theft had any effect on the teams, but I do know that the Fargo Force downed the Sioux Falls Stampede in overtime by a 3-2 score in their game. Mason Salquist’s seventh goal of the season came at 2:28 of the extra frame to give the Force the win. If you’re looking for Manitoba connections, former Manitoba Bisons forward Pierre-Paul Lamoureux, brother of the Lamoureux twins, coached Fargo to the win while former Brandon Wheat King, NHLer, and Manitoba Moose forward Marty Murray was the losing coach in this one!

It’s too bad that Mr. Mark wasn’t there to witness the victory.