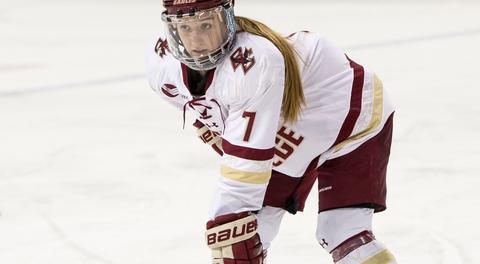 The Toronto Six selected early and often in the 2021 NWHL Draft making their mark unlike any other team in league history.

A year after the expansion club chose four players in their very first selection process, the reigning regular-season winners called a record eight names including an unprecedented three consecutive within the first five overall by virtue of Season 6 swaps with the Boston Pride and Metropolitan Riveters for additional picks on June 29.

The league’s only Canadian unit fittingly chose five players from home soil including forwarding Maegan Beres who was the draft’s first from north of the border picked at number three.

“I’m extremely excited to join an organization that allows me to help pave the way for the next generations of girls while furthering my athletic career,” Beres said. “I can’t wait to play with the Six in the NWHL and continue to grow the game.”

Not even 24 hours after her name was called, the Six announced that the North Vancouver, British Columbia native had inked her first professional contract joining a team that had 19 Canadians rostered for their inaugural campaign.

“We were delighted to sign a player of the character of Meagan Beres, the captain at Boston College,” said Six President Digit Murphy. “After talking with her coach, Katie King Crowley, one of the all-time greats at Brown ’97, I was convinced that Maegan is someone who will fit into our culture! As a two-way player, she will add value and depth to our forward corps. We’re looking forward to welcoming her to the franchise for Season 7.”

Beres captained the Eagles Division I program her senior year wrapping up a four-year tenure with a combined 38 points over 132 games. Notorious for her shot-blocking ability, the 21-year-old ranked ninth overall in the category across Hockey East in 2020-21 and tied for ninth in the nation among forwards as a junior which will surely benefit Toronto’s penalty kill that ranked fourth in Lake Placid.

“Maegan Beres is a great person and player,” said Crowley. “She works her tail off and does the little things that mean a lot to your team. Maegan will sacrifice to block shots, lead the penalty kill, and will do many other intangible things on and off the ice. She is a great leader and teammate who will be fantastic in the locker room.”

The Six truly stayed close to home with three of their next four Canadian picks hailing from nearby Oakville, Ontario. The first of which was fifth overall pick Taylor Davison from York University who made history as the highest player ever selected in the NWHL Draft from a USPORTS program. The defender will feel right at home given the Six share a facility with the Lions where she led the OUA in scoring from the blue line in 2019-20 amassing 23 points in 24 games.

“Taylor is one of the best players to come through the York Lions women’s hockey program,” said Lions head coach Dan Church. “She was a leader on and off the ice. I’m thrilled that she will be continuing her hockey career in the NWHL with the Toronto Six. The Six are getting a dynamic two-way defender who will work hard every game and contribute in the community as well. I can’t wait to see what she does at the next level.”

Another USPORTS product chosen by the Six was Olivia Atkinson who heard her name called in the fourth round. The forward from Oakville most recently suited up for Concordia University in 2019-20 where she netted seven points over 20 contests. She’s also got a year of CWHL experience under her belt following three seasons at McGill University including a 2016-17 campaign where she scored more than a point-per-game.

“She has the ability to score and generate offense and is solid defensively,” said Stingers head coach and women’s hockey legend Julie Chu. “Committed to on and off ice training, she’s the player that would skate seven days a week, two times a day if you offered her the ice.”

Fall River, Nova Scotia native Annie MacDonald, a forward from Princeton University, and Oakville’s Rachel Marmen, a defender from Mercyhurst University represent the club’s other two Canadian picks and were chosen back-to-back in the second round at number nine and ten respectively. The ninth pick was the club’s third additional entry in 2021 acquired by a 2020 transaction with the Pride.

“Annie MacDonald is a hard-working, 200-foot player who will outwork her opponents,” said Tigers head coach Cara Morey. “She is a playmaker and energy-giver who will help the Six in all areas of the game.”

In her three seasons of competition at Princeton, MacDonald played in 93 games accumulating 43 points while helping the Tigers earn a pair of NCAA tournament berths and the 2020 ECAC tournament title. Marmen scored 11 points on three goals and eight assists during her final collegiate season and was named Second-Team All-College Hockey America.

“We are extremely proud of Rachel,” said Lakers head coach Michael Sisti. “She was a wonderful student-athlete and we know she will continue to do great things going forward.”

Canada wasn’t the only country the Six pulled from as Russian defender Daria Tereshkina was one of a trio of international-born players competing in the NCAA who were chosen by NWHL clubs. At the end of her four-year career at the University of Maine the fifth-round pick had produced 29 points in 110 total games.

“Dasha is the type of player that makes everyone’s game and day better,” said Black Bears head coach Richard Reichenbach. “Her energy is contagious and she is the ultimate team-first player. She excels at both ends in front of the net and is a physical presence. She also has the ability to see the ice well and make plays.”

Toronto also picked a pair of American forwards including Tatum Skaggs from Ohio State University and Leah Marino from Robert Morris University. Skaggs was the team’s fourth overall pick and scored an impressive 65 goals and 59 assists for 124 points in 132 games for the Buckeyes, however is expected to play in Austria this season having signed with EHV Sabres Wien. Marino, on the other hand, has already signed her first NWHL contract with T6.

“I am beyond excited to get started and play in the NWHL,” Marino said. “After the sudden discontinuation of the Robert Morris hockey program, I wasn’t ready to step away from the game. The Toronto Six franchise gave me a new home, one that values the professional aspect of women’s hockey and the excellence that comes with it.”

The native of South Tahoe, California capped her third and final year at RMU with a CHA conference championship and 11 points in 97 career games to her credit.

“Leah is an excellent two-way player with exceptional leadership qualities,” said Colonials head coach Paul Colontino. “Her versatility to play both center and wing and be equally effective is a bonus to any team. Her size, strength and toughness combined with her ability to finish in tight make her the complete player that’s so hard to find.”

“Allowing Leah Marino to continue on her hockey experience was a key factor in selecting her to be part of our organization,” said Murphy. “She is a hard-working player who brings an incredible drive and work ethic to our club. While she’s the youngest player to sign in the league, Leah can certainly keep up with the fast pace of our team and we are confident that as a rookie she will make an impact on our team and improve and develop into a consistent performer. We’re thrilled to have her join for Season 7.”

When the dust finally settled on a historic night, Toronto’s depth increased by five forwards and three defenders bringing their two-year NWHL Draft total to 12 players comprised of nine forwards and this year’s three on defense.

The inaugural NWHL International Draft will be held on July 25 with the Six holding the fourth overall selection.