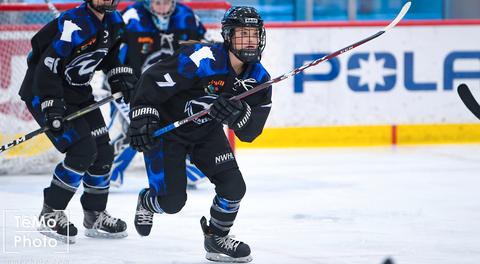 SAINT PAUL – In her dedication to winning a second Isobel Cup for the State of Hockey and serving as an inspiration to the players she coaches at her old high school, Emma Stauber will continue to make the regular 150-mile drive from Duluth to Saint Paul in order to play for the Minnesota Whitecaps. The 27-year-old defender has signed a contract to play the upcoming NWHL season.

The 5-7 defender won the Isobel Cup with the Whitecaps in their inaugural NWHL season, while the pandemic forced the cancellation of the 2020 Isobel Cup Final, in which Stauber’s team was ready to take on the first-place Boston Pride. She has one goal and seven assists in her NWHL career and has been a rock on defense for Minnesota’s team.

“Emma is one of our key defenders,” said Whitecaps GM and co-head coach Jack Brodt. “She’s an excellent puck-mover with speed and strength, and we are very happy to welcome her back to the Whitecaps.”

The Duluth native was a standout collegiate player for the University of Minnesota Duluth Bulldogs, playing her steady brand of defense in 142 career NCAA games and serving as one of the captains in her senior season. After graduation, Stauber played one season in the SDHL with HV71 and was the team’s highest-scoring defender with 6-7-13 in 19 games.

“My NWHL and Whitecaps experience has been great over the last two years. Obviously, we had a great ending to our season in 2019 winning the Isobel Cup and that was one of the greatest moments in my hockey career, especially playing the Final in Minnesota. It was an unforgettable experience that we were looking to repeat last season. Unfortunately, we were not able to play that last game for the championship, but that has motivated us even more. We are eager to get the season started even with adjustments we have to make in order to play.

“I live in Duluth, so I commute about 2.5 hours in order to get to practice and our games, but the experience has been worth every mile. I also coach the girls’ high school hockey program that I graduated from in 2011 – the Proctor-Hermantown Mirage – and it has been remarkable to have their support in continuing my career. Having the opportunity to share my challenges, my failures, my successes and my journey to professional hockey with them have sparked their desire to go farther than they ever believed they could go. That is why a lot of my teammates and I continue to play. We love the game, but we also want to inspire those coming up behind us to accomplish more than we have been fortunate to accomplish.

“Our Whitecaps fans have been absolutely exceptional in the last two seasons! We would not be where we are without their support. Although we may see some changes this season regarding game admissions, we hope our fans will continue to support us in other ways because we cannot do it without them and we look forward to the day we get to see them all again.”