In a highly anticipated opening day matchup between the Metropolitan Riveters and expansion team Toronto Six, it was the strong play of Leila Kilduff and a heroic performance from Sonjia Shelly that secured the win for the Riveters.

Kilduff got the game’s only two goals, both in the first period. She let loose a harmless-looking shot just over a minute into the game that bounced off a body in front for the first goal. With a minute left in the period, Kilduff struck again and again was the recipient of a deflection in front for her second goal of the game.

“We couldn’t have asked for a better start, scoring a goal with one minute into the game,” said head coach Ivo Mocek. “Overall, I thought we set the tone of the game very early.”

From there, Shelly shut the door, stopping all 40 shots from the Six, though she made sure to give the skaters in front of her credit, too.

“Our D was playing great today, they were letting me see the puck, they were pushing the players to the outside, and they were just really making my job a lot easier,” said Shelly.

Toronto did their best to keep up, outshooting Metropolitan by 40 shots to 19, but it wasn’t enough in the team’s first NWHL game. Elaine Chuli stopped 16 shots to keep the game close, but Emily Janiga secured the empty-net goal with 22 seconds left in the game to seal the deal for the Riveters.

Here are some of the highs and lows from the game: 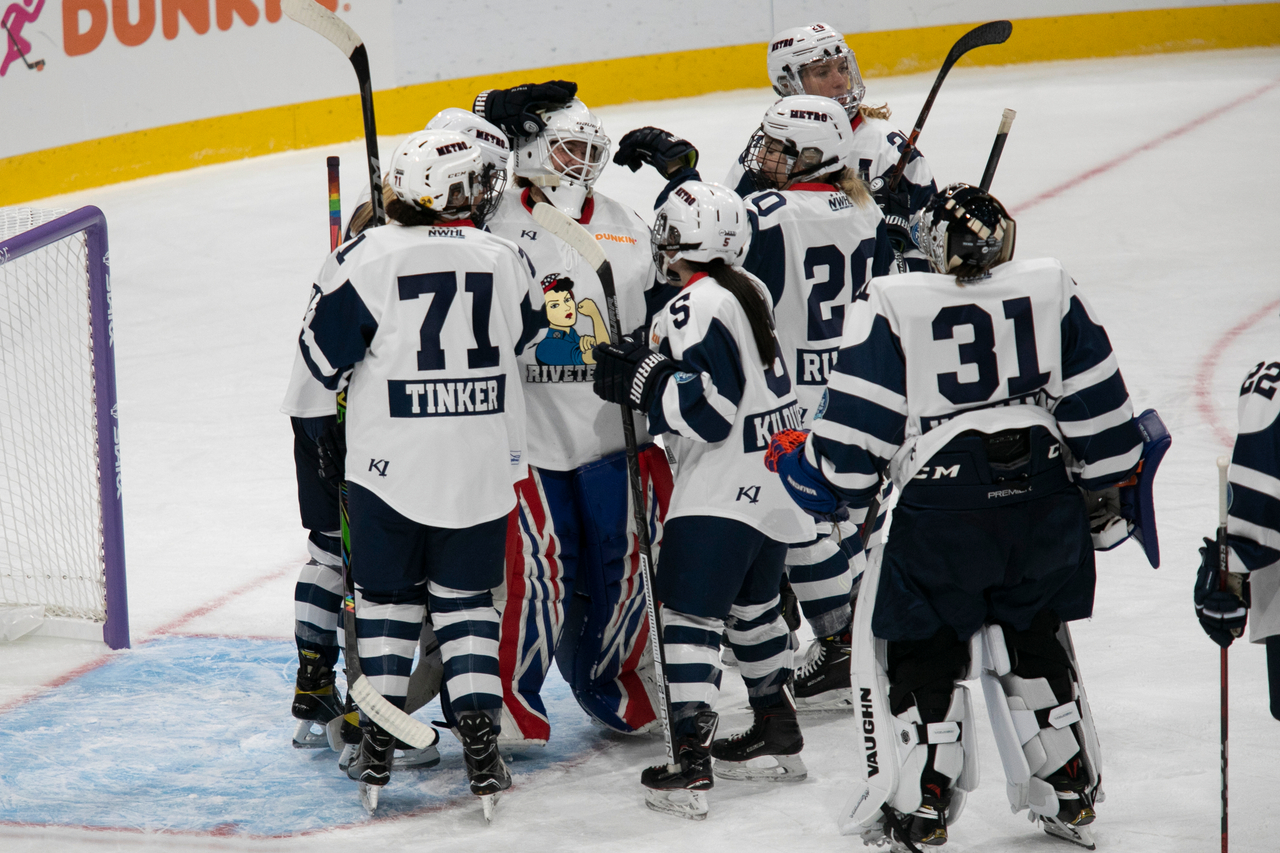 While Kilduff rightly got well-deserved praise for her two goals, newcomer Kelly Babstock, who picked up the primary assist on Kilduff’s first goal, quietly had a strong game of her own.

“Babs being on a team, we all know what kind of energy she brings to the group…that first pass to Leila on that first goal, was just a smart play,” said Mocek. “She made such important plans maybe that people didn’t even notice…she made some game-changing plays during the game.”

Babstock didn’t just make herself known on the scoreboard, but also had a sprawling save that singlehandedly preserved the Riveter’s shutout and squashed Toronto’s much needed momentum. Sure, she took a penalty too (we expected nothing less) but maybe this is a new Kelly Babstock hat trick – an assist, a penalty, and an impressive goal-line save.

Going into the season, the Riveters were without last year’s starting goaltender Sam Walther, but they didn’t need to fear. Shelly has settled in nicely after her solid season with the Whale last year. Though her numbers didn’t always reflect her play, Shelley is used to being the team’s last line of defense and made a number of critical saves for the Rivs on Saturday.

MIKYLA GRANT-MENTIS AND THE POWER PLAY

It’s hard to find positives in a shutout, but just because Toronto ran into a hot goaltender today doesn’t mean there weren’t any positives in their game. They wildly outshot Metropolitan 40-19, and in the team’s power-play had some grade-A chances.

“Our power play was probably our strongest point in the game, and our PK was also strong,” said Grant-Mentis.

Grant-Mentis in particular looked right at home on the Six’s power-play alongside Shiann Darkangelo and Emma Woods, to name a few. Hopefully, the Six’s power play will get on the board for them soon. 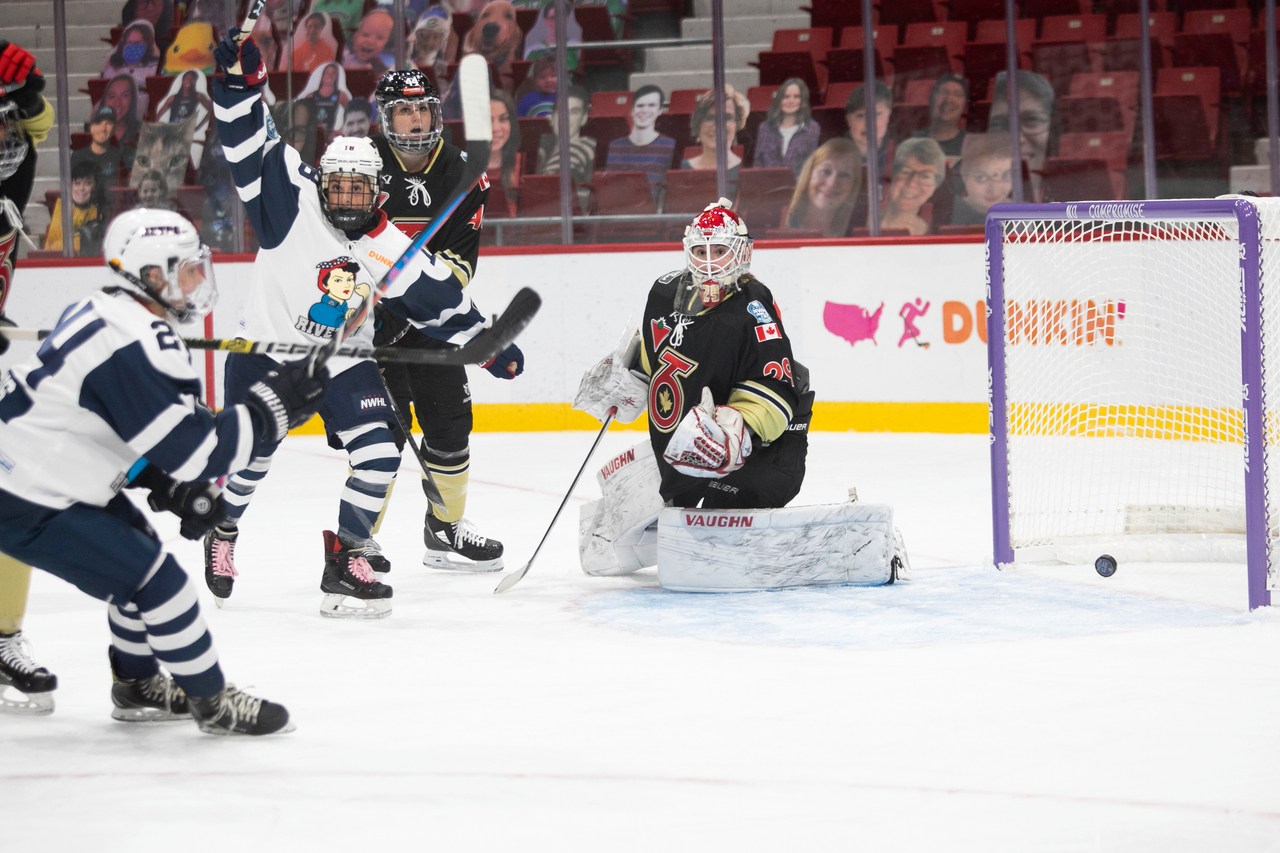 The Six had a lot of hype going into their first game, but they were on their heels for much of the first period, which came back to bite them later.

“Obviously we’ve got to get those jitters out at the beginning, and just stay calm, and I think we noticed as the game went on, it did get better,” said Shiann Darkangelo.

“We definitely got better after the first period, it was our first period playing together as a whole team,” said Grant-Mentis.

Now that the pressure of playing in the first game is behind them, the Toronto Six should be able to calm down and come out strong in their next contest.

There’s no checking allowed in women’s hockey, and that’s a given, but there’s inevitably physical play that comes up during the course of a game. However, the enormous open-ice hit from Julie Allen on Emily Janiga was not incidental contact.

Allen was penalized for the hit, and Janiga skated off on her own power and was able to play the rest of the game, but it was an extremely dangerous hit that the Riveter’s bench was up in arms over.

THE PACE OF THE GAME IN GENERAL

Don’t write the Toronto Six off yet. There were moments where they showed flashes of the skill the team has – now it comes down to them putting together a more solid 60-minute effort. Both of Kilduff’s goals came off deflections out front – they weren’t pretty. The Six may need a gritty goal like that to really get their offense going. As their head coach Murphy said, “It’s not about winning the first game, it’s about winning the last game.”

As for the Riveters, they can skate away happy with a win in their first game, but they can’t get comfortable. Sonja Shelley stood on her head for them tonight and were it not for a diving Babstock, this game could have been much tighter.