On December 19, 2018, Christmas came early for Kendall Cornine and the Metropolitan Riveters.

Just two days after celebrating her 22nd birthday the RIT Tigers captain was chosen sixth overall in the 2018 NWHL Draft which was held mid-season for the first and only time in league history.

She went on to graduate from Rochester as the program’s all-time leading scorer at the Division I level with two-time CHA All-Academic Team honors and quickly established herself as one of the league’s brightest young stars.

“I was at home for Christmas break, still in my senior year, when the draft took place,” Cornine recalls. “I was super pumped to know that I would keep playing hockey and that my family and friends would be able to watch me.” 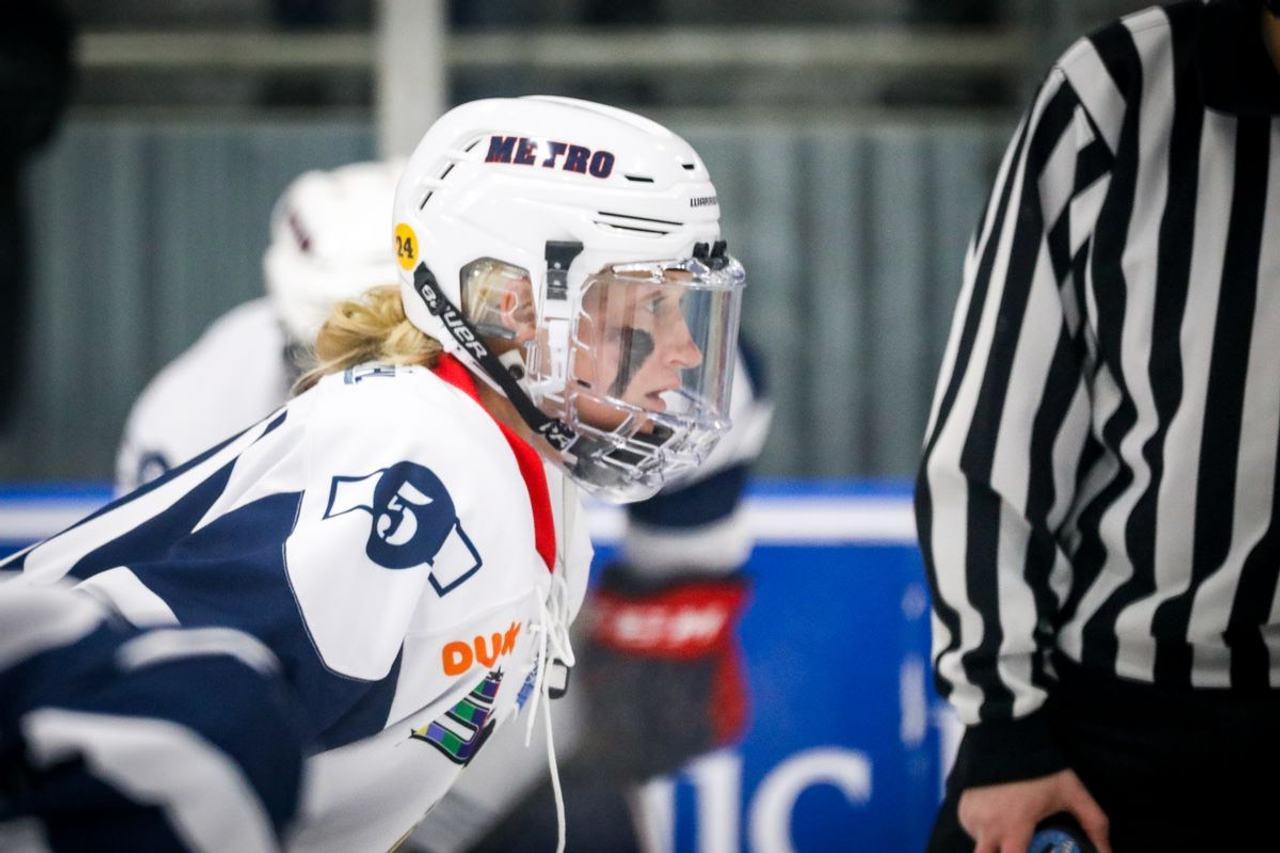 Cornine grew up in Kinnelon, New Jersey not far from Riveters home ice which made it convenient for parents Cathy and Dave to follow her rookie season.

“I think my parents were most excited about me getting drafted because they didn’t have to give up hockey,” she laughed. “They came to every game. They even flew to Minnesota to watch us. It’s been super exciting.”

It didn’t take Cornine long to adjust to the professional pace scoring in her NWHL debut against Boston with a memorable goal assisted by her college teammate and Riveters roommate Mallory Rushton. She also remembers the following weekend road trip to Minnesota where after losing big in the opening game the Rivs won the rematch in overtime with Cornine contributing a pair of goals.

“That was our first game early on to come together as a team and it was fun to overcome a loss,” she said. “Who we had on the team made the transition smooth for me. On the ice, in the gym, we were all in it together. I was fortunate to play with some good players who could compliment me on the ice and help me produce.”

Cornine developed the nickname “Score-nine” tallying five times over her first five games. The All-Star finished Season 5 with an impressive 24 points in 24 contests which ranked third on the team. Her 13 goals ranked second on the club and made her the youngest player in NWHL history to score 13 times in a season.

“Kendall is a silent killer,” said Riveters head coach Ivo Mocek. “She’s not always flashy or necessarily the fastest player out there, but she creates dangerous situations. She works hard and is extremely effective and efficient in all areas.”

Off the ice, Mocek describes Cornine as funny, easy-going, and like the glue of the locker room who gets along well with everyone. On the ice, he remembers a time she scored an amazing shorthanded goal on an end-to-end rush that was further proof of her confidence to make plays at the highest level.

“At that time I felt like she can do anything and that she’s here to stay and to do some damage in this league,” he said. “Some players come from college to the professional level and are shocked. It takes time to adjust physically and to the speed and there is a lot more pressure to perform. Kendall dealt with the adjustment really well. She plays calmly and without nerves. She took advantage of the opportunity and certainly exceeded expectations.”

Even though Cornine and the Riveters were limited to just three games in a shortened 2020-21 campaign, her time in the NWHL has been a dream come true.

“The past two years have been an awesome experience,” she said. “We would have loved to see it through in Lake Placid but being part of the Riveters has helped me fall in love with hockey all over again. Being on a team in practices and games, we’re competing for something and I can’t picture myself out of that environment.” 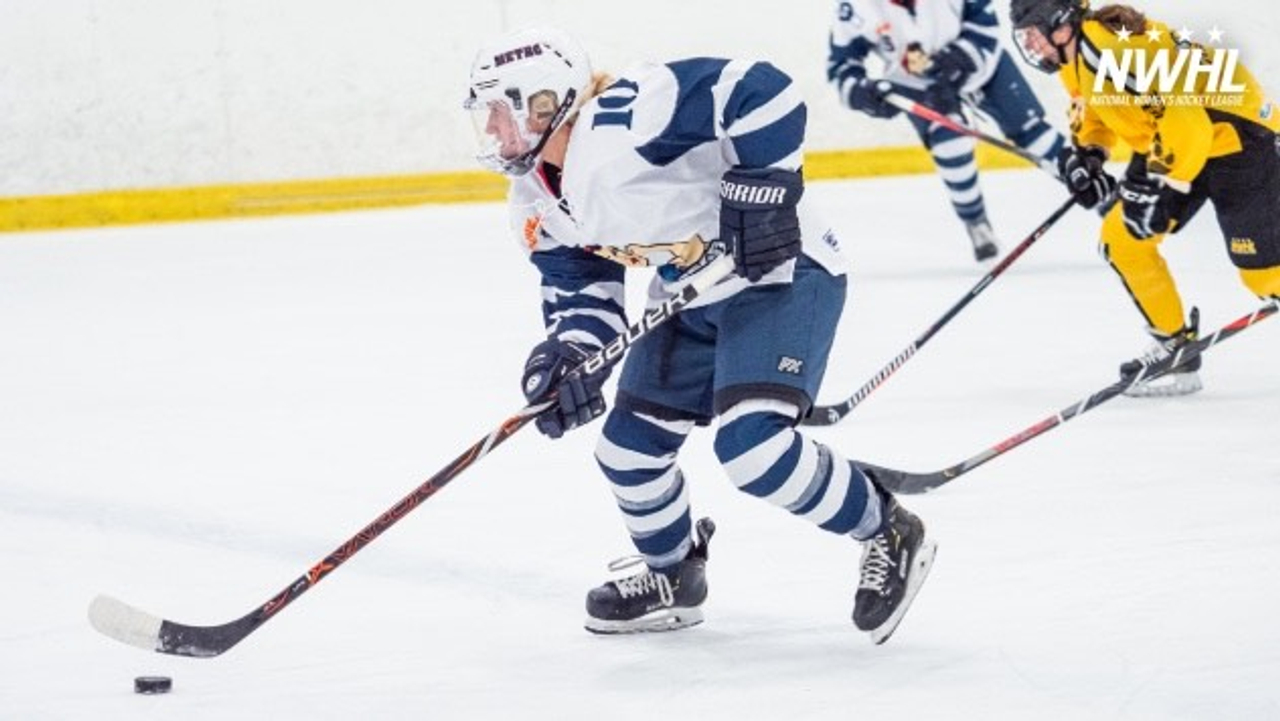 Outside of hockey, Cornine teaches physical education at a private school and coaches soccer, lacrosse, and hockey. She’s proud of her influence over the next generation of athletes not only in her day job but in the NWHL.

“It’s been awesome to watch the league grow,” she says. “Playing with players like Madison (Packer) and being around Anya (Packer), they’re trying to change things for the better. It’s exciting that the players I coach now have the opportunity to play pro when they get older.”

On June 29 another group of prospective players will take their next step towards a pro career as part of the 2021 NWHL Draft, a feeling still familiar for Cornine who is the only player from the first three rounds of the 2018 class to play more than one NWHL game to date.

“Make sure you stay in shape,” she says is her biggest advice. “The players in the NWHL are bigger, faster, and stronger. You need to come ready to play.”

And if anyone’s lucky to land a pick like Cornine, who says Christmas can’t come in June.

previous
Calgary: Showcase Report | 2021 SDGT
next
Jackson brings it all to Buffalo