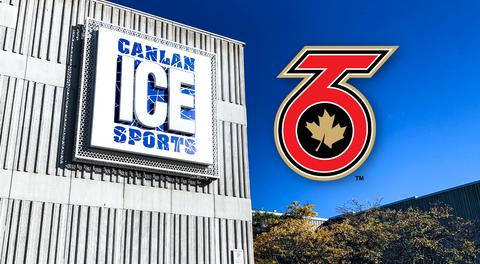 TORONTO — Five months after the Toronto Six were first announced, logos and jerseys became reality, and the roster filled out, the NWHL’s sixth team now has a home. The Six announced a partnership with Canlan Ice Sports to play the team’s inaugural season out of Canlan Ice Sports’ York facility.

Canlan Ice Sports’ York facility is located at Jane St. and Steeles Ave. W in the north of Toronto and houses six ice surfaces including a 1,200 seat Olympic-sized rink, which the Toronto Six will be playing on. The Toronto Six will also be using Canlan as its primary practice facility and have locker rooms built out specifically for the team.

“Our first priority in a home rink was finding somewhere fans across Toronto and the GTA could come to see the Six play,” President Digit Murphy said. “Canlan is in an accessible location with all the amenities we could’ve asked for and we can’t wait to step on the ice of our new arena and for the puck to drop signaling the start of season six.”

The Canlan complex, which includes conference rooms, a bar & grill, and a 4,000 square foot training facility, has played host to Team Canada’s National Junior and World Championship Men’s and Women’s hockey teams and is home of York University men’s and women’s varsity teams.

“We are excited that our York (Toronto) location was chosen as the host facility for the Toronto Six,” Canlan Ice Sports Corp. President and CEO Joey St-Aubin said. “Canlan is committed to growing Women’s hockey through innovative instructional programs, leagues, tournaments, sport-related experiences, and partnerships. We are looking forward to working closely with the club’s ownership and management to bring a whole new dynamic to the sport here in Toronto.”

For more information on the Toronto Six: https://toronto.nwhl.zone/