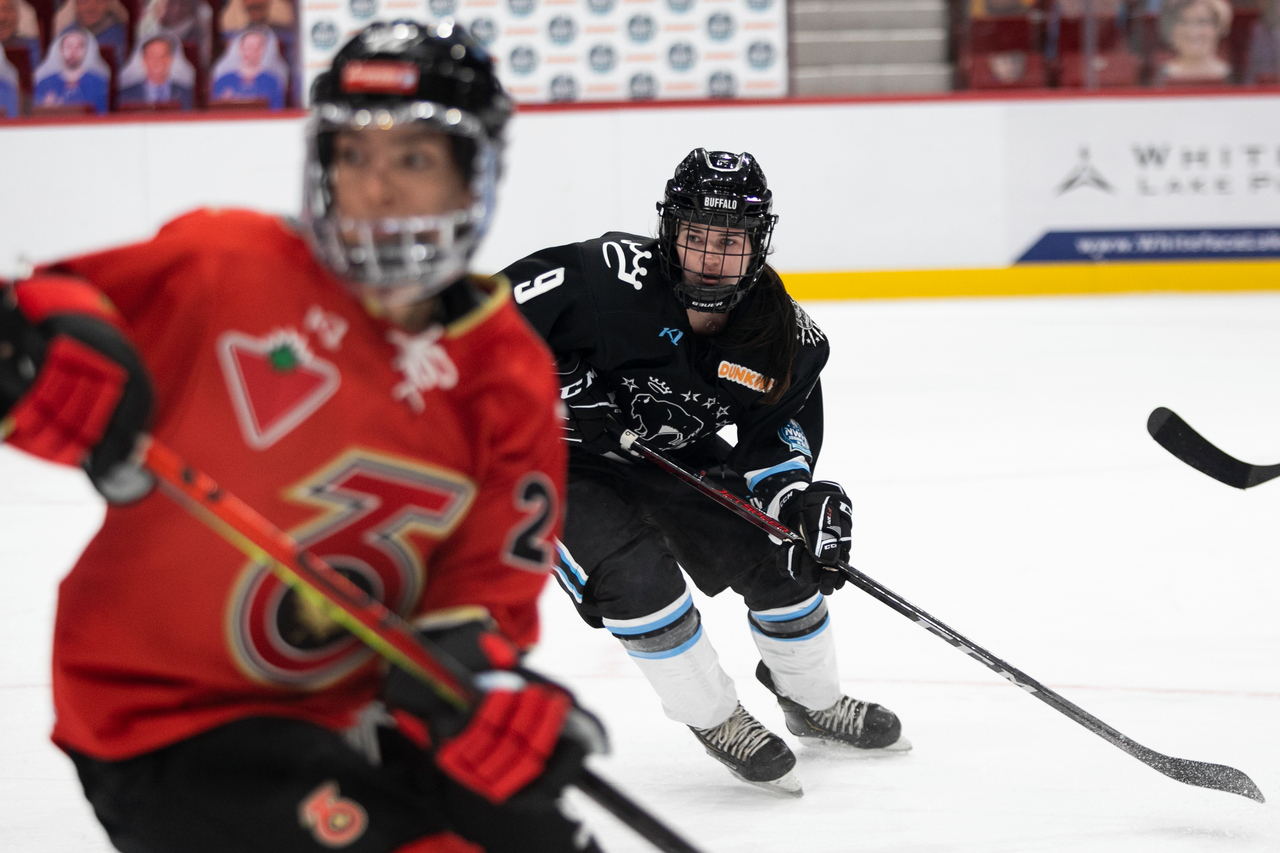 The Buffalo Beauts went into Wednesday night expecting to face off against the Metropolitan Riveters, a matchup that head coach Pete Perram said he’d been waiting 12 months for. Instead, the Riveters team sat out while the Beauts faced off against the Six, a change made in line with the NWHL’s medical protocols.

Despite the late change, the game was entertaining from start to finish, featuring some fast-paced offense and stellar goaltending. Ultimately, the Six extended their winning streak to two games with a 4-2 win.

“When we find out that we have to play (tonight), it was really physically and emotionally tiring to play four games in five days. The kids answered the bell,” said Toronto head coach Digit Murphy. “They played all the way to the end.”

Brooke Boquist got Toronto on the board to start on a beautiful breakaway just 2:39 into the first period.

The Beauts answered back with Autumn MacDougall’s first NWHL goal, picking up the rebound in front of the net after Lenka Curmova carried the puck into the zone with a spin-o-rama move. MacDougall struck again with less than a minute left in the period, finishing off a two-skater rush with Curmova.

The Six tied the game back up again late in the second frame, with Taylor Woods picking up a rebound from a Mikyla Grant-Mentis shot. Toronto answered Buffalo’s late goal in the first with a late goal of their own in the waning moments of the second to take a 3-2 lead. Megan Quinn sniped a goal past Beauts goalie Carly Jackson, who was one of Buffalo’s most reliable players.

“She was a wall,” said Murphy on Jackson. “We’re throwing like 46, 48 shots at her and she was a wall…she was really good, hats off to her. She kept them in it.”

Emily Fluke picked up an empty net goal for Toronto, tucking the puck past a couple of Beauts players from the side of the net.

Though Buffalo picked up the loss, the star of the game was goaltender Jackson. In the two games prior to Wednesday’s tilt, Jackson made 83 saves against the Whale and the Pride. She added 45 more saves against the Six, cementing herself as Buffalo’s go-to goalie.

“One of the things we went to do, with Nate Oliver our GM, is to build up our backend. And we started with our goaltender and I think we’re very solid,” said Perram. “We have a huge group that really comes to play every day, but CJ is a professional. The ability for the players to play a game and trust the goalie, to know that she’s got your back, you can’t put that in weight of gold.”

Jackson comes to the NWHL after an illustrious college career with the University of Maine, where she finished her senior season with a 1.90 GAA and .934 save percentage, good for all-time lead amongst Black Bears players.

It’s also worth tipping the hat to MacDougall, who picked up not only her first but second NWHL goal in Wednesday’s game. MacDougall is the first NWHL player to be drafted from USports, and while she notices some differences between the college and pro game, ultimately she feels comfortable playing at this level.

“I think the maturity level of all the player and strength and stuff is a little bit different, but it’s hockey,” said MacDougall. “We’re all good players, we all came from college and university, so kind of used to the pace now. But definitely the strength is something I noticed.”

“The T6 real key to success is the dance party,” said Murphy. “That’s how we come together.”

There’s not another team in the NDubble right now having more fun than the Toronto Six. From their post-game dance parties to their cellys on the bench, the light atmosphere is keeping the players and coaching staff loose.

“I’m having fun, you know, and I think that really says a lot about our team,” said Murphy. “We don’t take it too seriously, we take it a shift at a time, we have fun with each other, and it’s really about the experience. I think it keeps us focused, and keeps cool things happening for us.”

Whether it’s the light atmosphere, the talent on the team, or both, whatever Toronto is doing is working for them. They’ve picked up five out of a possible six points in their last three games, scoring 11 goals in that same time frame. They’re currently sitting just behind Minnesota in the standings with five points, and look to be a formidable foe now that they’ve got their legs under them and some chemistry on the ice.