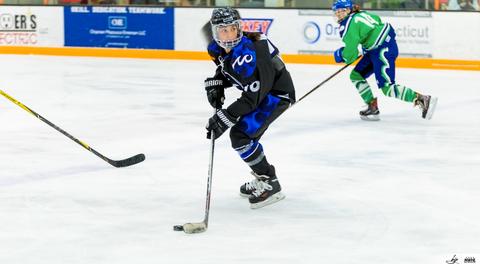 SAINT PAUL – The Minnesota Whitecaps today announced the signing of veteran forward Brooke White-Lancette, second-year NWHL defender Rose Alleva, and defender Sara Bustad, who is joining the team after one season in Buffalo.

An original member of the Whitecaps, White-Lancette’s long and accomplished career has included years with the U.S. National Team program and at Northeastern. This will be her third season in the NWHL and her 17th with the Whitecaps. Last season, she had two goals and an assist in ten games.

In 133 games over four seasons at Northeastern from 1998-2003, White-Lancette had 45 goals and 72 assists for 117 points. She took a year off from Northeastern in 2000-2001 to join the U.S. National Team’s residency program in Lake Placid and play in the 2001 World Championship and pre-Olympic Tour. She also participated in several development camps for the national program.

“I’m so proud to be a part of the Minnesota Whitecaps,” said White-Lancette. “Nothing compares to being on the ice with your teammates, and to have the opportunity to defend and compete for the Isobel Cup is something truly special. As always, I’d like to thank the NWHL, the Whitecaps organization, our coaching staff, loyal fans, TRIA Orthopedic, TRIA Rink, the Minnesota Wild, my teammates, and my family for making it possible to be a part of the game we’re all blessed to play.”

Alleva was plus-5 in 17 games in 2019-20, her first season with the Whitecaps after playing two seasons in China in the CWHL. The 5-3 defender, who was born in China and raised in Red Wing, Minnesota, was a finalist for the famed Ms. Hockey Minnesota award in her senior season at Red Wing High. At Princeton, Alleva scored nine goals and was credited with 30 assists in 115 career games. She led the Tigers’ defense in scoring in her junior and senior seasons and was Second Team All-Ivy League as a senior. Alleva also won the team’s Unsung Hero Award in her senior season and was a recipient of the Preseason Athlete Award in her junior and senior seasons for her commitment to preparation and conditioning.

“It is an honor to be playing again for the Whitecaps,” said Alleva. “I love what our team stands for and our efforts to grow the game. I can’t wait to start games in the new year!”

Said Minnesota co-head coach Ronda Curtin Engelhardt: “Rose is a smooth-skating, puck-moving defender who is tenacious in her pursuits. We’re really glad to have Rose back for her second NWHL season.”

A native of Stillwater, Minn., Bustad is coming home to join the Whitecaps after playing the 2019-20 season in Buffalo, where she was 2-9-11 in 23 games with the Beauts. At Minnesota State, the versatile skater played 138 games. Prior to college, Bustad attended two USA Hockey national development camps. Bustad formerly served as Community Hockey Coordinator for Diversity Development and Sled Hockey for the Tampa Bay Lightning.

“I’m beyond excited to join the Minnesota Whitecaps for my second season in the NWHL,” said Bustad. “It’s great to be back in the Minnesota hockey community. I’m looking forward to being teammates with the women I grew up playing with and against. Thank you to the Buffalo Beauts organization, my teammates, and the supporters for my professional hockey experience in New York last year.”

Minnesota GM and co-head coach Jack Brodt said of the new signings: “Brooke is a team leader and the hardest worker on our team. Rose’s good hands and quick moves are a great asset in breaking out the puck. Sara will bolster our defense and her ability to make plays should add to our offense. I’m confident that all three players will play important roles in helping the Whitecaps retain the Isobel Cup.”