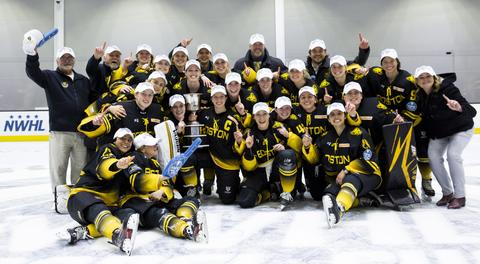 For the second time in National Women’s Hockey League history, the Boston Pride are Isobel Cup champions skating to a 4-3 victory over the Minnesota Whitecaps at Warrior Ice Arena.

The Pride were also the league’s first winner back in 2016 and became the first team in the league’s six seasons to celebrate a second title.

Captain Jillian Dempsey, the only holdover from the inaugural team, was awarded MVP honors, presented by Dick’s Sporting Goods. She scored the second of the team’s three unanswered goals in the middle frame that paced the Pride to victory and finished her 2021 season with nine total points.

“I guess I was in one of my sweet spots, I like shooting from that spot,” Dempsey said of her goal to reporters post-game. “Everybody went out there and did their job and owned their role and battled hard one shift at a time and that was just our mindset and focus going forward. So you know, proud of this whole group.”

When Dempsey accepted the Isobel Cup from NWHL Commissioner Tyler Tumminia she immediately passed it along to teammate Kayleigh Fratkin, a six-year veteran, who finally got to hoist the prestigious prize.

“Boston certainly has become home,” said Fratkin, the league’s top-scoring defenseman. “It’s been amazing to be a part of kind of the growth of where we started when we won four games, I think, when I joined the team in season three to Paul (Mara) joining us in season four and really kind of building a culture and building a winning organization. It’s been awesome to do it alongside Jill and, you know, Mary Parker and some of the other players that have been around for a while. I’m speechless.”

Saturday’s game gave everyone the rematch of the 2020 final that was never played. The Pride were set to host the Whitecaps a year ago March 13, however, season five would never award a champion as a result of the COVID-19 pandemic.

“I think this is one of my favorite victories to be honest with you,” Pride head coach Paul Mara said. “Working with these ladies for the last three years, they deserve everything. For me to watch them grow and watch them improve and watch how hard they work and the dedication they put in is, you know, second to none.”

After exploding for seven goals in their semifinal, the Whitecaps kept the offense rolling when Allie Thunstrom showed off her speed in the first. Rushing one-on-one she created her own space by cutting to the middle in Pride territory and fired a wicked wrister past Lovisa Selander at 7:29.

Just as they did in Friday’s semifinal the tandem of Mary Parker and Tereza Vanisova connected for the Pride’s first goal. This time with Parker getting the last touch on a goalmouth scramble. Dempsey’s perfectly placed shot over the shoulder of Amanda Leveille gave Boston the lead they would not relinquish at 15:05. Lexie Laing then scored on the power play at 17:31 taking a beautiful cross-ice pass from Christina Putigna who recorded her second straight two-assist game to lead the Pride in 2021 scoring with 12 points over nine games.

“To score first and get that momentum going was helpful and I think even going into the second period we came out strong,” said Whitecaps co-head coach Ronda Engelhardt. “We had a couple of really good chances that we didn’t capitalize on and then they start scoring and that’s where we needed to reset and that’s where we kept fighting.”

The Whitecaps would not back down. Trailing 3-1 in the third they built some momentum on a clutch penalty shot save by Leveille. Eight seconds later Thunstrom scored her second of the night and fourth goal in two games at 7:46.

The Pride converted on another power-play opportunity to restore their two-goal lead at 13:32 when Taylor Wenczkowski buried a rebound off a Fratkin point shot.

Meaghan Pezon did make things interesting for the Whitecaps scoring a power-play goal of their own at 19:42 to cut the lead to within one. Minnesota called timeout but fell short on their final push for the equalizer.

“We are a team of fighters,” Whitecaps defenseman Winny Brodt-Brown said. “Like all of these players have been playing through adversity all of our careers and that’s why you continued to see us in the bubble fight back from behind and I think that’s just a credit to the character of the players on our team. We would go to battle with them and it was just a really fun team. And you know for a season that wasn’t ideal we made the best of it.”

The game brought an end to what many consider to be the longest, shortest season. The NWHL’s sixth campaign began with six teams on January 23 in Lake Placid where a total of 15 games were played over 10 days. COVID-19 cases forced a pause, and the league later announced its return and four-team playoff format on March 8. The resiliency of the athletes, determined to finish what they started, made Saturday’s climax special.

“It’s awesome for these players,” coach Mara said. “They worked so hard for the last seven months and to achieve what they did tonight is the pinnacle of women’s hockey right now.”

The Isobel Cup Playoffs, presented by Discover, was televised across the United States on NBCSN in primetime with an all-female broadcast team. All female officiating teams skated every game, and the championship’s ceremonial puck drop was performed by Mayor Kim Janey who made history this week becoming the first woman and first Black Mayor in Boston history.

“I think it’s really special now this is something that little girls can look to that Winnie (Brodt-Brown) and I when we were younger, and Ronda (Engelhardt) too, we didn’t have women’s hockey players on the ice (on TV) battling for anything,” said Allie Thunstrom. “Now it’s there and they say if you can see it, you can be it. Even though we didn’t come out on the winning end it was really special to be part of and for all the little girls that want to be out there one day – just keep working.”