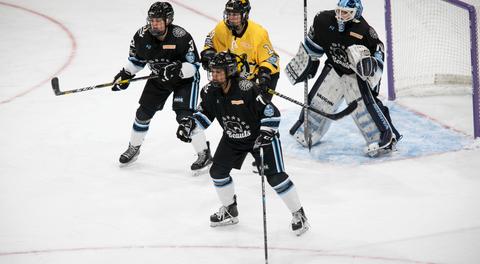 The Pride picked up their first win of the season against the Buffalo Beauts with a solid 5-1 victory on Sunday night.

The Beauts had a chance to get on the board early when forward Kristin Lewicki earned a penalty shot in the first frame. Boston netminder Victoria Hanson turned aside from the attempt to keep things scoreless, and shortly afterward Jillian Dempsey banked a shot off goalie Carly Jackson from behind the net for the first goal.

“First period we got an ugly goal, Demps, I think off the back of the goalie’s legs and sometimes, like I said last night, it takes an ugly goal to get things rolling, and it did,” said Boston head coach Paul Mara.

Buffalo answered with a goal of their own on a beautiful breakaway from Jordan Juron; her goal was the lone tally for the Beauts, though she rang one off the post later on. McKenna Brand got a wicked shot past Jackson to make it 2-1 shortly after Dempsey’s goal.

A trio of Pride players added to the lead in the second period. Dempsey scored again to earn her 100th career point; she became the first player in NWHL history to reach the milestone. Less than a minute later, Sammy Davis, the first overall draft pick from the 2020 NWHL Draft, picked up her first NWHL goal on the power play. Taylor Wenczkowski scored the Pride’s final goal late in the second period.

Eight different players got on the scoresheet for the Pride, but Jillian Dempsey shone brightest for Boston.

The Pride’s captain hit a historic milestone on her second goal of the evening, earning her 100th career NWHL point. She’s the first player in the league to reach the 100 point mark, though she didn’t know how close she was going into the game (and neither did her coach, apparently).

“I thought she got it last year,” said Mara.

“The main focus coming into tonight was us bouncing back and being resilient after our loss last night,” said Dempsey. “It was an overall strong team effort.”

It speaks to who Dempsey is as a captain, she gave all the credit to her team for working together to earn a bounce-back win. Though the recognition is a nice bonus, her attention is focused on the more important prize at the end of the season.

“We want the Cup,” said Dempsey. “That’s our milestone, that’s where our focus is.”

Though the Beauts struggled to put the puck in the net, a bright spot on the Beauts was the play of Jordan Juron. Juron picked up Buffalo’s lone goal of the evening on a clean breakaway with just over eight minutes left in the first period. She came close to getting another one, hitting the crossbar with another shot later in the game.

But it’s not just what Juron brings to the Beauts on the ice, though that’s certainly part of her skillset. Teammate Marie-Jo Pelletier emphasized Juron’s off-ice contributions as well.

“Right from the start, when Jordan joined the Beauts she brought a lot to our team. She’s so positive, very energetic, and she brings a lot of leadership, I’ve been learning a lot from her,” said Pelletier. “And she just carries that over to the ice. She has experience in the league… it’s huge for us to have that leadership.”

Dempsey wasn’t the only player to earn a milestone on Sunday. Sammy Davis, the number one pick in the 2020 NWHL Draft, picked up her first goal on a power play that struggled against Minnesota.

For Davis, it was nice to get the power play going, as well as relieve the pressure of getting her first NWHL goal.

“Yeah, it feels good. Jill and I were talking about ‘(getting) the monkey off your back,’” said Davis. “Our whole line was starting to click, and it feels good to (see) it all come together.”

Overall, Mara was pleased with his team’s power-play performance, which scored twice on seven opportunities.

“I think our power play came up big for us tonight. I have all the confidence in the world in these players,” said Mara. “They’re so skilled, and it was just a matter of time.”

Despite falling to Boston, Buffalo focused on the positives in the postgame presser. There was a lot to focus on – they went toe-to-toe with Boston on the face-off dot and finished with a .436 winning percentage, and blocked a whopping 19 shots in addition to the 40 that Jackson faced.

“We’re not upset with the game at all. There’s a ton of positives to take away with it, and one being…our D zone,” said associate coach Rhea Coad. “We really try to have our players ask questions and make it clear for them to be confident, and coming into today’s game, they did a great game with understanding the information and being confident and playing their game.”